Please ensure Javascript is enabled for purposes of website accessibility
Log In Help Join The Motley Fool
Free Article Join Over 1 Million Premium Members And Get More In-Depth Stock Guidance and Research
By Rachel Warren - Jan 19, 2021 at 7:01AM

You can just sit back and watch the cash roll in with these two top stocks.

Dividends are a beautiful thing. Whether you want to generate a secondary income stream or boost your personal liquidity to reinvest in the stock market, dividend stocks are the way to go.

Not all dividend stocks are created equal, and companies with a storied history of raising their payouts are often the most compelling buys for dividend investors. When a company raises its dividend every year for 50 consecutive years, it snags the supreme title of a Dividend King. The roster of companies that possess this title is so small, that fewer than 30 stocks made it to the list in 2020.

Let's take a look at two of the top Dividend Kings on this list that you can buy and hold for a lifetime. 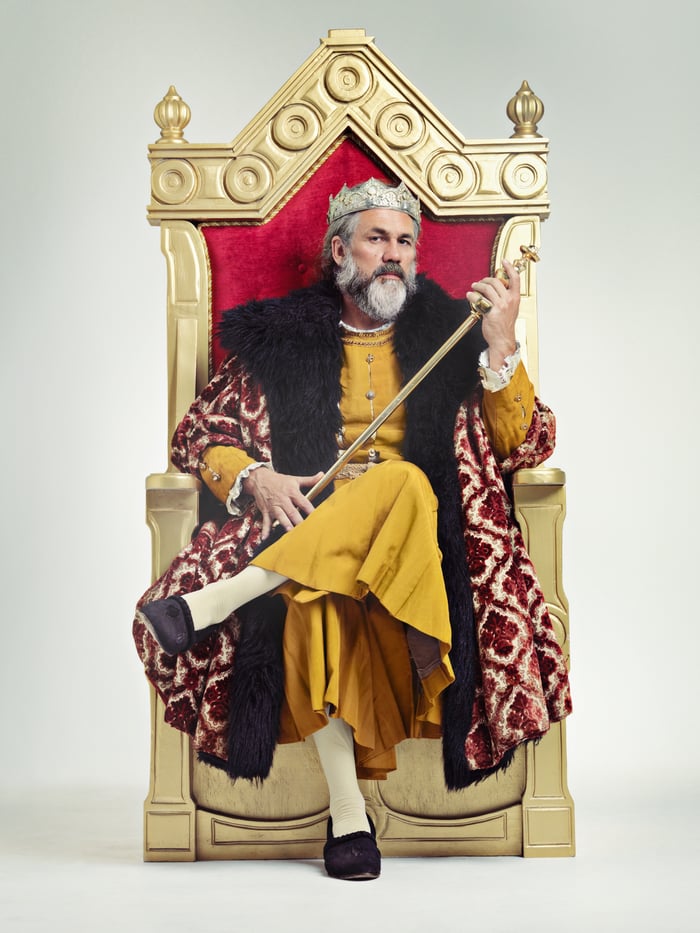 Johnson & Johnson (JNJ 1.75%) has raised its dividend every year for nearly 60 years. The company's dividend yields 2.5% at the time of this writing, which is above that of the average stock trading on the S&P 500 index.

Johnson & Johnson is a nearly 140-year-old company. It has seen the worst of the worst in terms of economic volatility and all the while remained a mainstay in the pharmaceutical industry. There's no question that the pandemic has impacted Johnson & Johnson's top and bottom lines. But its losses have been minuscule compared to those that many other companies have suffered in the wake of the COVID-19 pandemic. Out of the first three quarters of 2020, the company only posted a revenue decline in the second quarter.

It should also be noted that Johnson & Johnson is generally known for incremental but consistent growth. For example, during the 2016-2019 period, it reported single-digit revenue increases each year.

The company has a robust lineup of products to support balance sheet growth, from household names like Tylenol and Listerine, to blockbuster drugs such as Remicade, Stelara, and Simponi. Johnson & Johnson also boasts a strong pipeline of products across an array of lucrative therapeutic areas, including infectious diseases, oncology, and immunology.

Johnson & Johnson stock and its balance sheet could also be set for some major gains if its COVID-19 vaccine JNJ-78436735 is safe and effective at clinical trials. Its subsidiary Janssen Pharmaceutical is developing, studying, and manufacturing JNJ-78436735. The vaccine is currently enrolled in two separate phase 3 trials, one studying the vaccine's safety and effectiveness as a one-dose regimen and the other as a two-dose treatment course.

On Jan. 13, Johnson & Johnson released positive interim data regarding the single-dose regimen of JNJ-78436735 from the ongoing phase 1/2a study. Management reported that JNJ-78436735 "induced an immune response and was generally well-tolerated across all study participants. Data demonstrated that, after a single vaccination, neutralizing antibodies against COVID-19 were detected in...100 percent of participants aged 18-55 years at Day 57. These neutralizing antibodies remained stable through Day 71..."

This is promising news indeed for both investors and the general public. We'll know more when Johnson & Johnson releases data from the single-dose phase 3 study, which is expected to happen before the month is out. Even without the potential success of its COVID-19 vaccine factored into the picture, Johnson & Johnson's stable dividend and the strength of its core business are just two reasons this stock is a superior long-term buy.

3M (MMM -2.13%) is one of a very small club of stocks that has achieved more than six decades of successive dividend growth each and every year. The company's dividend yields an above-average payout of 3.5%. While shares of the company declined last March when the market fell, the stock has nearly recovered to its trading price 12 months ago. And trading at around 20 times trailing earnings, now looks like a good time to catch this stock on a discount.

The nearly 120-year-old industrial company's products include everything from automotive materials and personal protective equipment to aerospace applications and manufacturing chemicals. 3M operates in a particularly litigious environment due to the nature of its products, and is currently grappling with a chain of personal injury actions, ranging from allegations concerning chemical water contamination to defective product lawsuits. At the time of this writing, 3M literally is embroiled in hundreds of thousands of legal proceedings that are waiting to be adjudicated. The company could easily be ordered to pay billions of dollars' worth of damages and legal fees over the next few years. Just in 2018, 3M settled an environmental case with the state of Minnesota to the tune of $850 million.

Nonetheless, 3M still has plenty to offer the aggressive investor willing to buy and hold the stock for its upside prospects. There's something to be said for investing in a large-cap stock like 3M that has been in business for as long as it has and manufacturers products that generally face consistent demand regardless of the market's movements.

While 3M's sales were down by a slim margin in 2019, it reported 4% sales growth in 2018 and 5% in 2017. And despite the impact of COVID-19, the company kept its sales positive in both the first and third quarters of 2020. All throughout the pandemic, 3M has also made meaningful additions to its cash position while reducing its net debt. The company's third-quarter operating cash flow grew 23% from the year-ago period, and it slashed $1.2 billion from its net debt load during this period.

3M's healthcare and consumer segments have proven to be its most resilient throughout the pandemic. In the third quarter alone, sales in these divisions grew 26% and 6%, respectively. 3M currently has $45.4 billion in total assets on its balance sheet ($4.1 billion of which are liquid), and $33.4 billion in total liabilities. 3M isn't a high-growth stock, but its track record as a company, diverse lineup of products, and stellar dividend make it a worthwhile value play for the long-term investor.