As online sports gambling wins rapid popularity and widening legalization across the U.S., casino company MGM Resorts International (MGM -7.54%) announced the end of its attempt to acquire U.K. sports-betting company Entain plc (ENT -1.65%). MGM says it will not make another, higher offer, though it will continue to collaborate with Entain on running its joint venture BetMGM sports-betting platform.

MGM Resorts' acquisition offer would have paid Entain $11.1 billion in an all-stock transaction with a 0.6 times exchange ratio. Entain rejected the offer on Jan. 4 on the grounds that MGM is undervaluing it, Bloomberg reports. Anonymous sources indicate this is the second bid Entain spurned, with MGM Resorts offering an unspecified, but smaller, all-cash amount in late 2020. 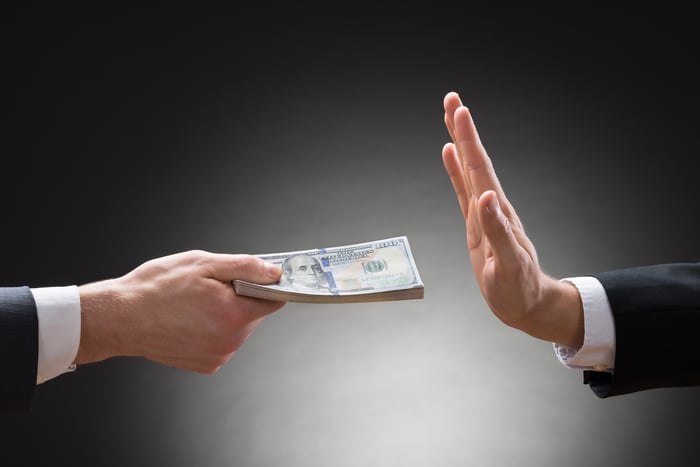 While MGM appears unwilling to offer Entain as much as the British company thinks it's worth, the American casino enterprise's CEO Bill Hornbuckle remains upbeat about the two companies' partnership. He remarked, "BetMGM has established itself as a top three leader in its markets and we remain committed to working with Entain to ensure its strong momentum continues as it expects to be operational in 20 states by the end of 2021."

The attempt to acquire and merge with Entain echoes similar moves by other players in the casino and resort market to strengthen their position in the rapidly growing sports-betting arena. Last September, Caesars Entertainment (CZR) acquired British sports-betting company William Hill for $3.7 billion. Just as Entain is helping MGM run BetMGM, William Hill was partnered with Caesars in a sports-betting joint venture before the acquisition.

MGM Resorts, which a hedge fund recently advised to sell its MGM China Holdings stake to fund further sports-betting expansion, is up over 3% in trading today, while Entain's shares nose-dived approximately 12%.