Please ensure Javascript is enabled for purposes of website accessibility
Log In Help Join The Motley Fool
Free Article Join Over 1 Million Premium Members And Get More In-Depth Stock Guidance and Research
By Brian Perry - Jan 20, 2021 at 8:31AM

Review your portfolio now for opportunities and risks you might face if rates go up.

While the yield on the 10-year Treasury is still near historic lows, rates have more than doubled since last spring's economic shutdown, and there are several factors that could lead to further increases. And though it seems unlikely that interest rates will skyrocket, even a moderate move higher will lead to stock market winners and losers-so you better start preparing now. 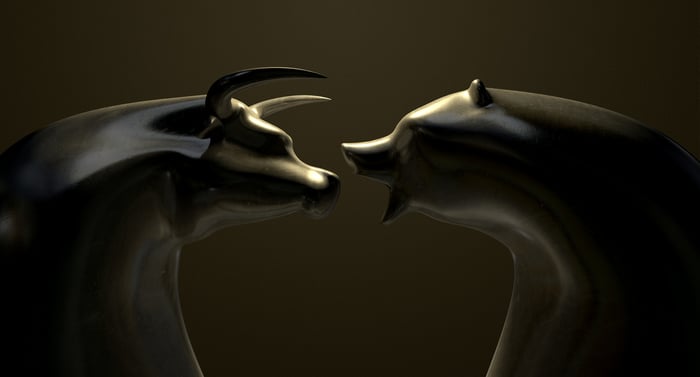 How much is the market worth?

In order to understand why higher interest rates impact the stock market, you need to remember what an investment is and how it is valued. When investing, you are paying cash today for the expectation of a cash inflow in the future. You then "discount" those future inflows into today's dollars. The higher the discount rate you use, the less valuable the investment, and vice versa.

Determining a discount rate for valuing the stock market is not an exact science, but most market participants use a combination of two inputs: the risk free rate and the equity risk premium (ERP.) The risk free rate reflects the safest investment you can make, and is generally proxied by the yield on the 10-year Treasury bond. The equity risk premium is an estimate of the  additional compensation investors should demand for holding "risky" stocks, rather than ultra safe Treasuries. If either the risk free rate or the ERP increase, the discount rate goes up.

That means that if the yield on the 10-year Treasury increases, the value of your future cash flow falls, which all else being equal makes the stock market less valuable. A recent study by Fidelity estimated that if the discount rate increases by 1%, fair value for the S&P 500 falls by 800 points.  That would represent about a 20% decline, sending stocks into a bear market.

So as you can see, interest rates matter quite a bit for stock investors.

But will rates go higher?

So given all that, what might cause rates to move up? Well, for starters, the economy could rebound faster than expected. The CARES Act passed in March 2020 is widely credited with providing support for the economy, even though the National Bureau of Economic Research estimates that only 40% of stimulus checks were actually spent. With the Democrats soon to be in control of the White House, as well as Congress, the odds of additional fiscal stimulus have increased, which could spur stronger economic growth.

Unusually for a recession, savings rates have also increased, leaving some Americans with dry powder once the pandemic eases. In fact, some estimates indicate that Americans have saved more than $1 trillion during the pandemic. It also seems likely that there is significant pent-up demand for "normal" activities that have been unavailable because of COVID, including things like travel, movies, dining out, and entertainment. This potential spending surge could prompt stronger economic growth as well as potential inflation for some goods and services. Stronger growth and higher inflation could in turn lead to higher interest rates because a bond's fixed payments become less valuable when inflation is eating away at them.

Finally, although the Federal Reserve is currently committed to keeping interest rates low in order to support an economy that has been ravaged by the pandemic, changes to its approach could eventually sow the seeds for higher rates. In an effort to spur stronger and more equitable economic growth, the Fed has already announced that they are shifting to measuring inflation across cycles, and that they would be willing to tolerate higher inflation for a time following a period of low inflation. Since inflation is a key component of interest rates, if the Fed is willing to let inflation run a little higher than market participants are accustomed too, higher interest rates could follow.

How to profit from higher rates

If interest rates do increase, investors will face both opportunities and risks, because while higher interest rates are a negative for the stock market as a whole, there are some companies and sectors that would benefit, while others are poised to suffer.

Financial companies make money by taking in deposits and then lending money out at higher rates, and a very low interest rate environment hurts their profitability. In its Q3 earnings release, Charles Schwab (SCHW -2.10%) reported a 10% year-over-year decline in revenue, owing to "the overall decline in both short- and long-term rates." But that also means that if rates revert to higher levels, Schwab can report better financial performance even without making operational improvements.

While financials might benefit from a higher-rate environment, companies with heavy debt burdens could face difficulties, as their cost of capital could increase alongside interest rates, resulting in a decline in profitability or even potential solvency issues. For instance, in the gaming sector, Caesars Entertainment (CZR) has more than $15 billion in long-term debt, while Wynn Resorts (WYNN -1.31%) has nearly $13 billion. Caesars and Wynn are just two examples; from there, you'll want to screen for companies with heavy debt burdens that could potentially take a hit from rising rates. That approach, combined with a focus on financial companies that would benefit, could leave you well positioned for an unexpected surge in interest rates.