Please ensure Javascript is enabled for purposes of website accessibility
Log In Help Join The Motley Fool
Free Article Join Over 1 Million Premium Members And Get More In-Depth Stock Guidance and Research
By Anders Bylund - Jan 21, 2021 at 7:39AM

Call it a correction, a fall, a bubble popped. Whatever your preferred terminology, Apple (AAPL 0.17%) shares are trading at incredibly lofty valuation ratios, and the stock is long overdue for a haircut.

I agree that Apple is an impressive company. Cupertino collected $275 billion of revenues over the last four quarters, generating $57 billion of bottom-line net income and $73 billion in free cash flows. These are huge numbers that suit a company with a market cap of $2.2 trillion.

However, Apple arguably reached a plateau in its business growth many years ago. Let me show you what I mean.

Apple's revenues have grown by a total of 21% over the last five years. Earnings rose 45% over the same period. Apple's share prices were completely disconnected from these modest gains, posting a 446% return in the same five-year period. 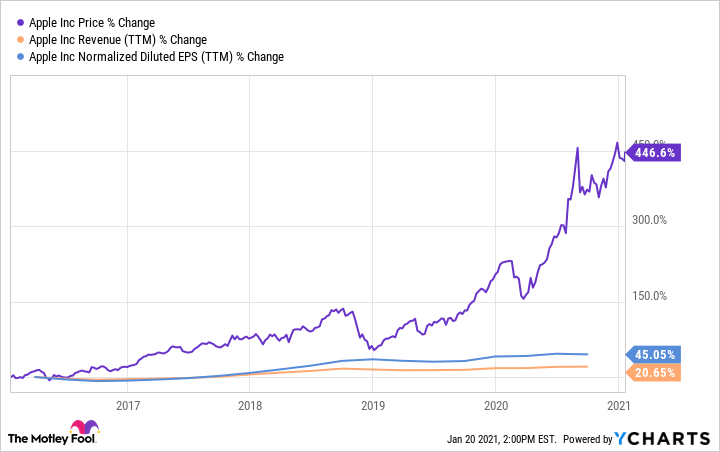 Let's compare Apple's slow growth to the more impressive sales and earnings increases seen in the other three tech stocks with trillion-dollar valuations. The purple line in the next chart really shouldn't inspire investors to give Apple a richer valuation than Alphabet (GOOG -1.29%) (GOOGL -1.34%) or Microsoft (MSFT -0.23%), and Amazon (AMZN 0.25%) stands out as the fastest-growing name in this group. 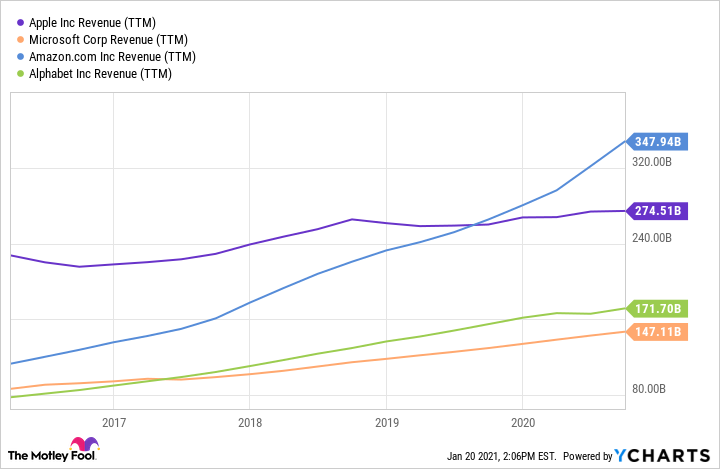 The differences are even clearer if we convert the dollar-based chart above to the percentage growth seen below. 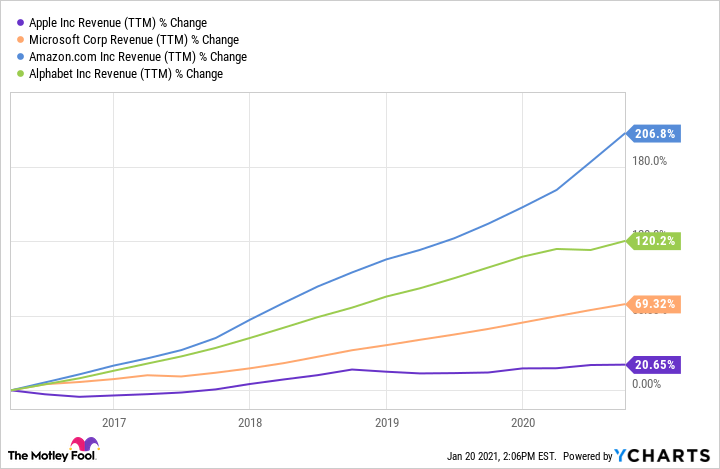 And don't forget about the bottom line. Next, you'll see how Amazon's earnings took off like a rocket when the Amazon Web Services cloud-computing service started to pull its weight. Alphabet's earnings nearly doubled in five years, and Microsoft's earnings more than tripled. These figures look forgettable in the shadow of Amazon's hyper-growth, but still left Apple far behind. 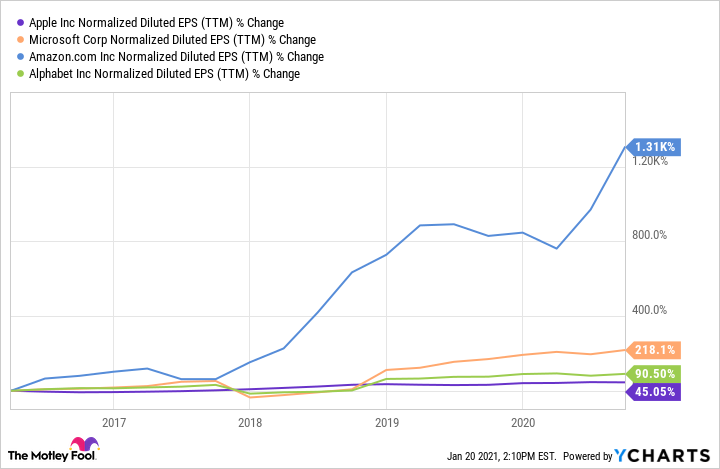 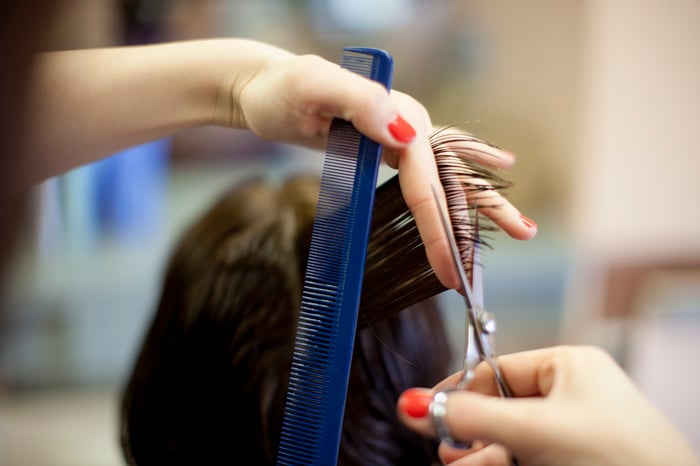 It's time for a haircut

Apple's stock rose 66% over the last year, 196% in three years, and 446% over the last half-decade. During these massive gains, the actual business was simply holding its ground. As a result, Apple shares are trading at nosebleed-inducing valuation ratios such as 37 times free cash flows, 39 times trailing earnings, and 8 times sales. Once upon a time, Apple was a value investment. These days, it's just a value trap.

I don't know what it will take to trigger a correction of these inflated share prices, but I can feel one coming. And I mean a big one -- at least a 30% haircut, and maybe more. Only then would Apple's stock price make any sense.

Apple's stock is not a buy today. If you already own it, you should probably take some of those exaggerated returns off the table and reinvest the loot in a less overvalued stock. All three of Apple's neighbors in the trillion-dollar club strike me as better ideas, because they can still support their massive market caps with impressive helpings of business growth.