Please ensure Javascript is enabled for purposes of website accessibility
Log In Help Join The Motley Fool
Free Article Join Over 1 Million Premium Members And Get More In-Depth Stock Guidance and Research
By Matthew Frankel, CFP® - Jan 21, 2021 at 6:38AM

This company could fit nicely into the notable SPAC investor's style.

There have been hundreds of special purpose acquisition companies, or SPACs, created over the past couple of years. And these have been led by many investors, some of whom bring extremely impressive resumes to the table.

While we obviously don't know what companies in particular are on Palihapitiya's short list, it can be fun to speculate. One of the top companies on my SPAC IPO "wish list" is transportation technology company Virgin Hyperloop. I think it would be an excellent candidate for one of Palihapitiya's SPACs. Here's why. 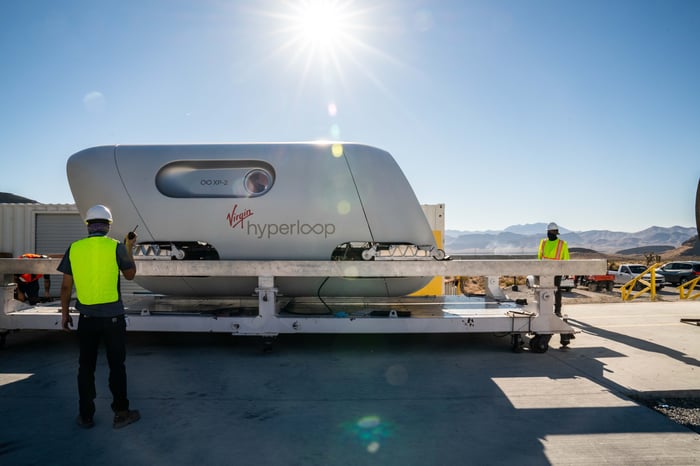 What does Virgin Hyperloop do?

Virgin Hyperloop is a transportation company that aims to build a commercial vacuum train system called a Hyperloop. The basic idea is that a passenger pod uses magnets to levitate over a track and travels through vacuum tubes, which virtually eliminate friction and air resistance, thereby allowing for much higher speeds and efficiency than would otherwise be possible. In fact, Virgin Hyperloop claims that it will be able to propel passenger pods at speeds of more than 670 miles per hour -- faster than commercial airliners travel.

To give you an idea of how revolutionary the Hyperloop could be, consider that it currently takes about six hours to drive from Los Angeles to San Francisco. It takes just under an hour and a half to make the trip by train (not including time spent waiting at the airport, going through security, etc.). The Hyperloop aims to cut that trip to just 43 minutes. Passenger pods will carry as many as 28 people, and the company also plans to create cargo pods to move items around faster than ever before.

The idea of a Hyperloop originated with Elon Musk, who suggested it in 2012 as a potential future transportation method. However, with Musk's time being consumed by Tesla (NASDAQ: TSLA), SpaceX, and his other ventures, he didn't have time to pursue the project and decided to publish his idea.

Hyperloop Technologies was incorporated in 2014, started raising venture capital, and made some impressive hires in its early months. The first unmanned test run of a propulsion test occurred in 2016, which proved the concept, and the first full-scale Hyperloop was tested the following year. In 2017, a partnership with the Virgin Group was announced, which ultimately led to the company's current name. Richard Branson had joined the board of directors as part of this deal.

There are several players in the vacuum train space, but Virgin Hyperloop appears to be the leader. In November 2020, it became the first company to complete a trial run with actual people, with the company's test site in Las Vegas propelling several people to 107 miles per hour.

Could it actually happen?

There are certainly some good reasons why Virgin Hyperloop could be a great candidate for a SPAC merger, particularly one with a Palihapitiya-led SPAC.

For one thing, Palihapitiya has clearly shown that he's not afraid to invest at the very early stages of long-term trends that have truly transformative potential. And we know through his first SPAC acquisition of Virgin Galactic (SPCE -5.27%) that he already appreciates and believes in the Virgin brand. Palihapitiya has said that he looks for companies that could be worth $100 billion someday, and Virgin Hyperloop could definitely get there if things go well.

Developing and building out a revolutionary transportation system would take money, and a lot of it. So far, Virgin Hyperloop's largest funding round brought in $172 million and has raised about $400 million throughout its history. A SPAC merger could inject several times that amount. While we don't know Virgin Hyperloop's valuation at the time of its last funding round (April 2019), it's safe to say it's well within the range of what one of Palihapitiya's SPACs could realistically acquire.

Finally, while the company hasn't specifically said it wants to go public, it has mentioned that it sees "enormous potential to attract investment from the private sector." So far, there has been no issue securing private equity investments. In addition to Virgin, DP World, GE Ventures, Abu Dhabi Capital Group, and several high-profile venture capital firms have invested. But, going public could potentially provide an entirely different level of funding.

To be clear, it's still very early in the development of the Hyperloop. While Virgin Hyperloop's testing at its Nevada facility certainly appears promising, we're years away from an actual passenger-carrying Hyperloop operating anywhere in the world.

However, it's tough to imagine a technology with more potential to transform global transportation than Hyperloop. I'd be thrilled to see the company go public via SPAC merger, and Chamath Palihapitiya could be just the visionary investor who could make it happen.

Are Chamath Palihapitiya's SPACs IPOD and IPOF Worth Buying Now?

Your Guide to Analyzing SPAC Investments

Why Buy a SPAC Before It Identifies a Target?

How to Decide Which SPACs Are Worth Buying