Please ensure Javascript is enabled for purposes of website accessibility
Log In Help Join The Motley Fool
Free Article Join Over 1 Million Premium Members And Get More In-Depth Stock Guidance and Research
By Keith Speights - Jan 22, 2021 at 5:09AM

No kidding around ... here's how they truly can.

If something sounds too good to be true, it usually is. So when anyone tells you that there's a hot stock that could skyrocket in a short period of time, a healthy dose of skepticism is warranted.

Indeed, I hope you're skeptical about what I'm about to tell you. I think there are three stocks that could realistically triple your money in 2021. Here are those specific stocks and exactly how they could deliver such a tremendous return by the end of this year. 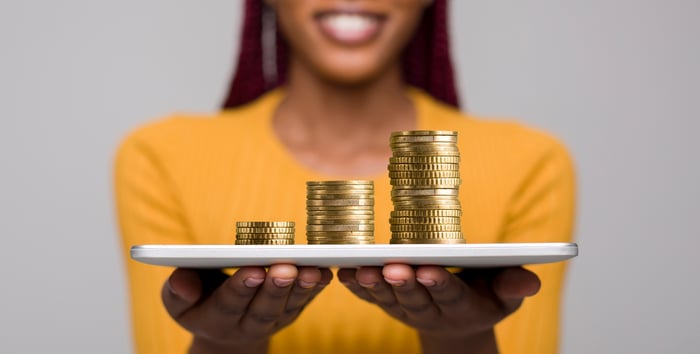 Frequently, the stocks that have the best chance of generated ginormous short-term gains aren't well-known. I view Altimmune (ALT -2.92%) as just that kind of under-the-radar stock that could be a huge winner in 2021.

Altimmune soared nearly 500% last year, primarily due to investors' excitement about its COVID-19 vaccine candidate. All of the current leading coronavirus vaccines are injections, and most of them require two doses. Altimmune's AdCOVID is a single-dose intranasal vaccine that holds the potential to be highly effective.

The biotech stock has retreated in recent weeks because the U.S. Food and Drug Administration (FDA) placed a clinical hold on Altimmune's application to begin an early-stage clinical study of AdCOVID. However, the FDA's clinical hold isn't related to concerns about the safety or efficacy of the company's experimental vaccine; instead, it's about requests for trial protocol modifications and manufacturing data.

I don't expect that it will take very long for the FDA's clinical hold to be lifted. Once that happens, it's simply a waiting game to see how AdCOVID fares in clinical studies.

Altimmune's market cap currently stands below $500 million. If AdCOVID delivers overwhelmingly positive results and advances into later-stage testing, it's easy to see how Altimmune's shares could triple or more over the next 11 months.

Many U.S. marijuana stocks are hot right now, including Jushi Holdings (JUSHF -2.27%). Its shares soared more than 300% in 2020. But with Jushi's market cap still only around $700 million, the pot stock should have a lot of room to run.

Jushi operates 13 retail cannabis stores nationally and is acquiring two additional stores in California. The company is in several states with fast-growing legal cannabis markets, including Illinois, Ohio, and Pennsylvania. It plans to open 17 new stores in the near future.

The cannabis operator is on a clear path to growth as things stand right now. But the dynamics of the U.S. cannabis industry are changing in ways that make Jushi's prospects even brighter. The recent vote in New Jersey to legalize recreational pot puts pressure on New York to follow suit.

There's also now a greater chance than ever before that marijuana could be decriminalized at the federal level. That would set the stage for Jushi to enter even more markets, as well as list its shares on a major U.S. stock exchange. If major cannabis reform is enacted into law later this year -- combined with the other tailwinds for Jushi -- it won't be surprising if its shares triple in value in 2021.

Many of the same factors that could drive Altimmune a lot higher this year also apply to Vaxart (VXRT 2.44%). The biotech company also has a promising single-dose COVID-19 vaccine in development that doesn't require an injection. Instead of an intranasal delivery, though, Vaxart's VXA-CoV2-1 is a tablet.

Vaxart should soon report results from a phase 1 study of VXA-CoV2-1. If those results are as encouraging as the experimental vaccine's preclinical data, the biotech's shares will almost certainly be off to the races.

The stock has already been a huge winner for investors. Vaxart ranked behind only Novavax among the best-performing coronavirus stocks of 2020, with a gain of almost 1,600%. Despite this tremendous return, though, Vaxart's market cap remains below $800 million.

Can any or all of these three stocks really triple your money in 2021? Absolutely. However, their success hinges on everything going right. As a certain man named Murphy has observed, that frequently doesn't happen.

Altimmune and Vaxart especially are subject to forces beyond their control. There's no guarantee that either of the two biotechs' COVID-19 vaccine candidates will fare well in clinical testing. Jushi has more influence over its fortunes. However, there are still potential obstacles that could cause the stock's growth to fall short of expectations.

The bottom line is that there's always a trade-off of risk and reward with investing. Altimmune, Jushi, and Vaxart have viable paths to delivering massive gains this year. But those paths also come with a lot of risks.