Please ensure Javascript is enabled for purposes of website accessibility
Log In Help Join The Motley Fool
Free Article Join Over 1 Million Premium Members And Get More In-Depth Stock Guidance and Research
By Brett Schafer - Jan 26, 2021 at 8:21AM

Since the market lows that rattled investors last March, many emerging high-growth companies have outperformed the broad indices by a significant margin. Stitch Fix (SFIX 9.66%) is no exception. Shares in the online styling service are nearly 700% during that time frame, making it one of the best-performing stocks of the past year.

But has the valuation gotten ahead of itself? Have investors missed the boat with Stitch Fix? Let's take a look. 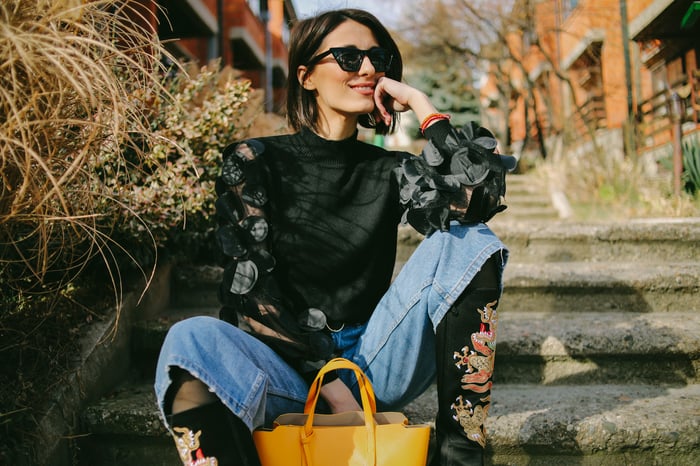 How the business is doing

Stitch Fix had an all-around solid fiscal 2021 first quarter (the three months ended Oct. 31, 2020). Total revenue hit $490.4 million, up 10% year over year, with active clients reaching a high of 3.76 million, also up 10% year over year. While not eye-popping growth numbers, it's impressive Stitch Fix has been able to put up any growth when demand for its flagship products -- workwear and social apparel -- has fallen off a cliff due to the pandemic.

Sales growth is less than half of what it was at the start of fiscal 2020 (21%), but management did guide for a return to 20% to 25% growth this year. If that forecast proves accurate, then investors should be confident that 2020 was only a temporary slowdown and not a permanent hindrance to the company's growth trajectory.

From a profitability standpoint, Stitch Fix hasn't been crushing it lately. Gross margin (revenue minus cost of goods sold) has stayed relatively steady, declining just 60 basis points in the latest quarter to 44.7%. However, selling, general, and administrative expenses expanded to 48.7% of revenue, up over three percentage points year over year. This pushed the company to report an operating loss of $18.6 million. Stitch Fix spends a lot on technical talent for its data science team, which can lead to high upfront expenses in the form of bonuses and stock options.

On a positive note, advertising expense decreased as a percentage of revenue in the fiscal first quarter, so it appears Stitch Fix is doing fine attracting new clients despite pandemic headwinds, proving to the market it has a unique, resilient business model.

Why a triple-digit rally?

But was that really enough to fuel nearly 700% returns in less than a year?

A good question but one that is hard to answer. Outside of the stock getting more popular among the Robinhood crowd and momentum investors, there aren't many concrete explanations as to why shares of Stitch Fix have done so well during the pandemic (and especially in the past two months). As many famous investors like to say: In the short run, the market is a voting machine, but in the long run, it's a weighing machine. Right now, investors are voting heavily in favor of Stitch Fix stock. In the long run, that same stock will be weighed against the performance of the underlying business.

Even with this big run-up, Stitch Fix's valuation doesn't look too crazy. It currently trades at a market cap of $10.2 billion as of this writing, giving it a price-to-sales (P/S) ratio of 5.8. That might be more than competitor Revolve Group's multiple of 4.4, but it's less than The RealReal at 7.7 and Farfetch Limited at 14.2. It's hard to judge a company on a valuation multiple alone, and these are not apples-to-apples business comparisons. With Stitch Fix flowing in and out of profitability, it's hard to pin an earnings or cash flow multiple on the stock too. It does have a consistent gross margin in the 44% to 45% range, an indicator that the company could enjoy healthy profitability at scale.

Prospective Stitch Fix investors and current shareholders should have lots of confidence in the company's growth trajectory, and they should be prepared for significant price swings in the stock. But even at a $10.2 billion market cap and with the past year's multibagger rally, long-term investors shouldn't think they've missed the boat on this business.