Procter & Gamble outshined the Kleenex maker in most key metrics this past quarter.

Investors kept their distance from Kimberly-Clark (KMB -0.59%) stock last year, with shares underperforming a booming market. The stock even lost ground to consumer staples rivals like Procter & Gamble (PG -1.64%), which appeared to be on a stronger growth path through the pandemic.

Kimberly-Clark's latest earnings results didn't do much to change that broader competitive narrative. But the owner of hit cleaning, personal care, and baby care products still had some good news for shareholders in its final 2020 report.

Organic sales were up 5%, which was well below the 8% spike that P&G reported earlier in the month. However, Kimberly-Clark still ended the year on a strong note, with the Q4 performance beating management's forecast to allow annual growth to reach 6%. CEO Mike Hsu and his team had forecast a 5% increase back in late October and were previously calling for gains of between 4% and 5%. 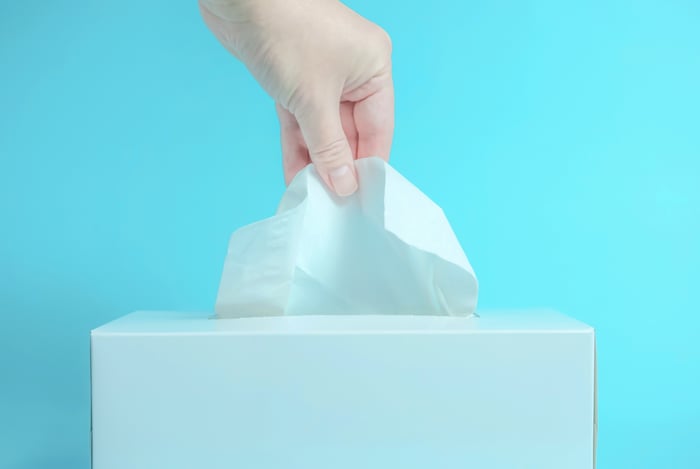 This final report constitutes the second straight time that Kimberly-Clark has meaningfully outpaced its targets. "We grew organic sales 6%," Hsu said in a press release, "with healthy underlying performance and increased demand because of COVID-19."

Management said most of the portfolio gained market share, but that growth was held back by its commercial services division that caters to businesses. The quality of Kimberly-Clark's sales gains was a bit weaker than P&G's, too, as most of the growth came from pricing boosts rather than increased sales volumes.

Cash flow was another bright spot. The company generated a record $3.7 billion of operating cash in 2020, up from $2.7 billion a year earlier. That spike helped fund major investments in areas like marketing and R&D, but it mainly translated into higher direct returns to shareholders. Kimberly-Clark spent $700 million on buybacks last year and paid $1.45 billion in dividends.

Income investors will be happy to hear that this year's dividend boost is a solid 6.5% compared to last year's 3.9% uptick. Kimberly-Clark also signaled continued aggressive stock buybacks ahead.

As for the short-term outlook, management is predicting that organic sales in 2021 will rise by between 1% and 2% to mark a modest slowdown compared to last year's 6% spike. The pandemic might not lift demand as high as it did last spring, but consumers should still be purchasing more home cleaning and maintenance supplies. P&G, whose fiscal year ends in June, is predicting organic growth of between 5% and 6% in fiscal 2021.

Kimberly-Clark's latest results suggest that it will continue to trail its larger rival in areas like sales and profitability even as it continues to improve its financial position while sending more cash to investors. Shareholders likely won't be disappointed by holding the consumer staples stock, but P&G still looks like the better buy if you're looking for a solid dividend holding for 2021 and beyond.