Please ensure Javascript is enabled for purposes of website accessibility
Log In Help Join The Motley Fool
Free Article Join Over 1 Million Premium Members And Get More In-Depth Stock Guidance and Research
By Dave Kovaleski - Jan 27, 2021 at 7:00AM

This stock is a market leader with a wide moat.

Financial technology companies, or fintechs, have become the hottest segment within the financial sector, and last year, they were one of its few bright spots. Fintech is a general term that encompasses any company that primarily develops technology to improve the delivery of financial services. The ones that get the most attention tend to be hot newcomers -- but some fintechs have the benefit of experience to go with their innovation.

That describes Fidelity National Information Services (FIS -1.60%), which was established in 1968. If this is a company you're not familiar with, I'll help you get to know it -- because this is one fintech you should consider buying in 2021. 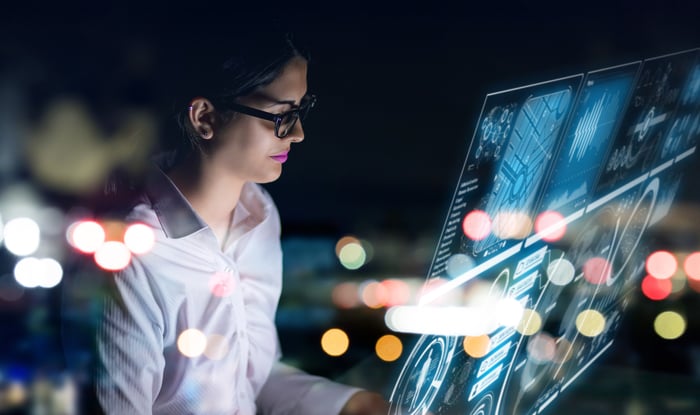 Fidelity National is what's known as a payment processor. It develops the technology that moves money between a merchant and a bank or other financial institution. Last year, Fidelity National moved about $9 trillion around the world.

Fidelity National has three major business units: Merchant solutions handles processing for merchants at the point of sale; banking solutions supports banks and financial institutions in facilitating the movement of money; and capital market solutions helps asset managers, hedge funds, private equity firms and fund administrators move money. As of the third quarter of 2020, the banking arm is the largest, generating about 47% of revenue, while the merchant business generated about 31% and the capital markets business generated about 19%.

There are very few players in this space, and Fidelity National is the largest -- or one of the largest, along with Fiserv, depending on how you measure. In 2019, Fidelity generated about $10.3 billion in annual revenue, and in the third quarter, it saw revenue climb 13% to $3.2 billion. Fiserv is in the same ballpark, but after those two, the next-closest competitor is Global Payments, which did about $4.9 billion in revenue.

As one of the market leaders, FIS has a wide moat that's well protected by the fact that customer retention is very high. This's because the banks, merchants, and financial institutions that hire these processors are reluctant to switch providers due to the high costs and complexity of doing so.

Jump on this stock

Fidelity National's net earnings plummeted to $20 million in the third quarter from $154 million the previous year, but that was primarily due to purchase price accounting and costs associated with the acquisition of Worldpay, a competitor in payment processing. On an adjusted basis, net earnings were up 18% year over year to $887 million. On an organic basis, revenue was relatively flat, which is not bad considering that transaction volume slowed during the worst months of the pandemic, primarily in the merchant business. Revenue was helped by the fact that transaction volumes began to improve in the third quarter.

The story almost got even more interesting. In December, The Wall Street Journal reported that advanced talks for Fidelity National to acquire Global Payments broke down at the last minute. That would have been an industry-shaking deal had it gone through. The article did say talks could get revived down the road, although there is little chance that they'll restart soon.

But even without the deal, Fidelity National is a strong buy coming out of 2020. As the recession fades and coronavirus vaccines begin to roll out, transactions should increase. With the added scale of the Worldpay merger and over $700 million in expected cost savings from the integration, Fidelity National should be able to expand its margins and achieve sizable earnings growth. The company posted $866 million in free cash flow in the third quarter, which is a healthy 27% of revenue, and it has $4.2 billion in available liquidity.

Fidelity National has a track record of consistent revenue growth over the past 10 years, and in that time it has had only two years of negative returns, down 1% in 2015 and 2% in 2011. Even through the pandemic, revenue remained fairly steady and the stock gained almost 2% -- lower than the S&P 500 but better than many other financial companies.

As a market leader with great financials and consistent and stable earnings power, Fidelity National has a relatively low valuation with a price-to-book ratio of 1.6, which is way down from its recent peal around 4.5 in August 2019. Considering all these factors, Fidelity National is a great buy right now.

How Will Fintech Evolve Over the Next 10 Years?

How Did COVID-19 Change the Fintech Industry?

Does the Payment Processing Industry Still Have Room to Grow?

FIS: A Fintech Stock That Should Be on Your Radar