Please ensure Javascript is enabled for purposes of website accessibility
Log In Help Join The Motley Fool
Free Article Join Over 1 Million Premium Members And Get More In-Depth Stock Guidance and Research
By Will Healy - Jan 27, 2021 at 8:24AM

After its run in 2020, can Shopify stock climb further?

Shopify (SHOP 5.04%) continues to remain on investors' shopping lists. As the pandemic increased the need for e-commerce retail, Shopify helped to improve the lot of merchants and investors alike. However, the rising popularity of both the platform and the stock has taken the valuation to new highs, leaving investors wondering whether Shopify stock is a buy at current levels.

Retailers have often chosen Shopify because they can set up a store without hiring a developer. Others turned to the platform as acquisitions brought new capabilities to the Shopify ecosystem. Adding 6 River Systems in 2019 made the Shopify Fulfillment Network more efficient with its expertise in robotics and software. Moreover, partnerships with platforms such as Amazon also increased its appeal by allowing merchants to reach more customers. 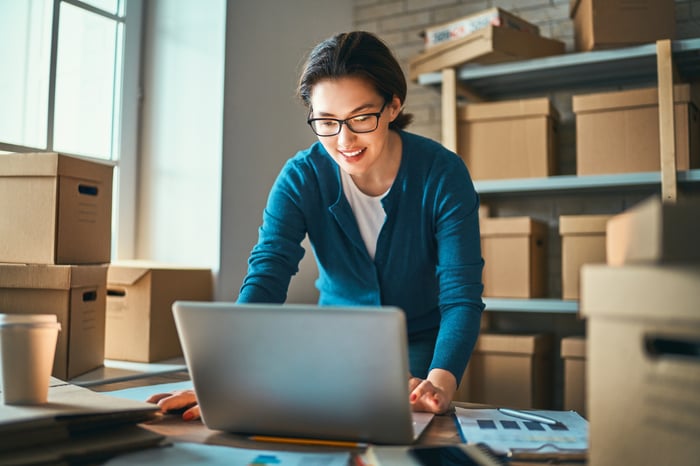 Indeed, Shopify took advantage of the increased need for online shopping options during the pandemic by initially offering incentives to new customers. While many of those deals have now ended, Shopify still gives new users a 14-day free trial.

Despite Shopify's customer appeal, competition in this field remains intense. According to Oberlo, Shopify controls about 20% of the market. While that makes it one of the industry's larger players, it still lags WooCommerce, a WordPress plugin, which now holds a 26% market share.

Nonetheless, Shopify stock remains one of the few pure plays for investors. Wix.com (NASDAQ: WIX), whose business controls about 17% of the e-commerce platform market, is one of the stock's few competitors.

Despite intense competition, investors have flocked to Shopify stock in large numbers. Over the last year, the stock has climbed approximately 160%, as the company's moves to capture new customers have boosted its top and bottom lines.

In Shopify's most recent quarter, total quarterly revenue climbed by 96% from year-ago levels. Net income came in at more than $195.3 million, or $1.54 per diluted share. This is a huge increase from the $78.9 million loss in the same quarter last year. While the $354.6 million in operating expenses amounted to a 40% increase over the previous year, these costs rose more slowly than revenue, helping Shopify turn profitable.

In the Q3 earnings call, company president Harvey Finkelstein credited the improved numbers with free trials that helped merchants set up stores faster. He also attributes integrations with platforms such as Facebook and Pinterest for helping to boost sales as well as Shop Pay, its accelerated checkout feature, for an improved payment experience.

However, this has caused some valuation concerns, particularly with the price-to-sales (P/S) ratio. The stock now sells for just under 60 times sales, a massive increase from the P/S ratio of approximately 15 just two years ago. 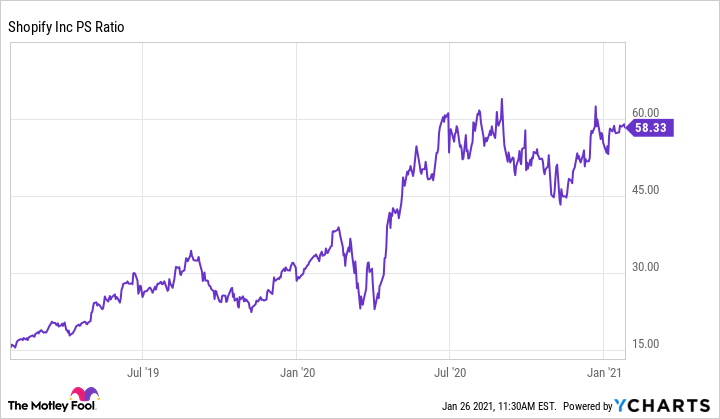 Given this valuation, Shopify's prospects for further short-term stock gains look increasingly uncertain. One reason for this lack of predictability comes from the company itself: Due to the uncertainty surrounding the duration of the pandemic or any possible fiscal stimulus, Shopify declined to provide any guidance. This uncertainty has not put off analysts, but some have taken a more neutral stand because of the valuation.

Considering the rising popularity of e-commerce, Shopify should continue to grow as a company. However, the lack of visibility about the future could mean that stock growth pauses or pulls back for a time. Shopify also faces significant competition, meaning the company will have to stay vigilant to maintain or grow its market share.

Additionally, 60 times sales is a high price, even for a fast-growing company such as Shopify. At its current valuation, any negative news could lead to multiple compression. Although investors should keep this tech stock on their watch lists, now is probably not the time to buy.