Please ensure Javascript is enabled for purposes of website accessibility
Log In Help Join The Motley Fool
Free Article Join Over 1 Million Premium Members And Get More In-Depth Stock Guidance and Research
By Luis Morales - Jan 28, 2021 at 8:17AM

Will QuantumScape continue to reward investors?

After a successful SPAC acquisition late last year, QuantumScape (QS 9.19%) stock skyrocketed almost four-fold from its first day of trading. Only to come down to the middle atmosphere in recent days. To say there has been a lot of speculation about this company's stock would be an understatement: Since the company released its battery performance data on Dec. 8,  2020 there have been headlines by would-be-competitors and would-be-customers, but little to change the company's story in a way that would justify such a wild ride. And millionaire-making stocks are all about the long-term outlook -- so, it's worth taking a closer look at the company's story. 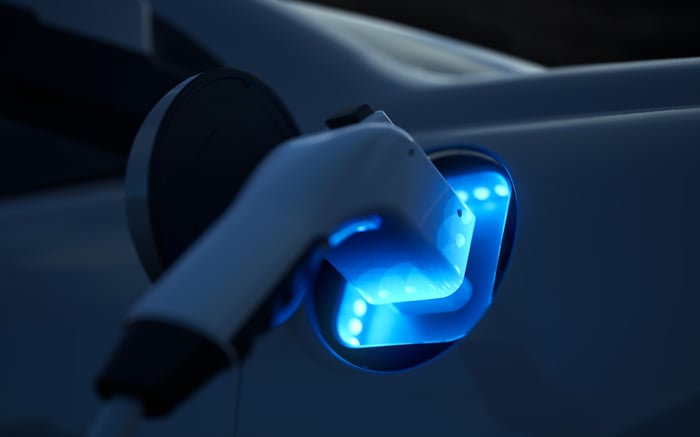 What is the investment thesis?

The basic thesis, or reason to invest in QuantumScape, is that it has developed a high-performance, solid-state battery that will let electric cars charge faster, go a lot farther, and become cheaper than the best electric vehicles(EVs) today, and even most gas-powered cars. Although the company has a close relationship with Volkswagen -- the world's largest car manufacturer -- it can sell its products to any other car makers. So, as the world speeds toward electric mobility, QuantumScape should be able to sell tons of its state-of-the-art batteries and create a lot of value for its shareholders.

The company still has a lot of work ahead of itself: It still has to turn its technology into a finished product, and literally build factories to manufacture it in large quantities -- which means it won't be able to see any revenue until at least 2024. And even then, per the company's latest projections, it will take until about 2027 for the company's batteries to power as many cars as Tesla (TSLA 7.33%) sold in 2020.

But all of this information has been available since early December. In the meantime, investors appear torn between deciding whether QuantumScape is a "Tesla killer", and struggling to justify its current $18 billion valuation -- or over 11 times 2028 estimated EBITDA.

Is QuantumScape a Tesla killer?

This is unlikely. But it is also the wrong question.

It is unlikely because even though QuantumScape's batteries appear to be longer-lasting, Tesla's appear to be cheaper, and seven years is a long time for Tesla and others to achieve new breakthroughs in battery technology and manufacturing -- let alone other innovations such as autonomous driving.

It is the wrong question, because QuantumScape does not need to be a "Tesla killer" to be a very successful company. Volkswagen just announced that it sold over 230,000 EVs in 2020, almost half of Tesla's 500,000 for the same period. And this is after only three years of trying, and with battery technology that is quite a bit behind Tesla's: Its top-of-the-line EV, the Porsche Taycan Turbo-S, has a range that's less than half of Tesla's top Model S.

The reason for this level of success in spite of such uneven specs is that demand for EVs is high, with over 90% of yearly vehicle sales worldwide still up for grabs for EV makers. So, it stands to reason that with seven additional years of manufacturing advances, cost reductions, and regulations that increasingly favor EVs, all manufacturers would be able to sell even more EVs if only they had access to higher-performance batteries, or once QuantumScape's batteries hit the market.

And as far as high-performance EV batteries, there don't seem to be many alternatives to solid-state chemistries at this time. Coming up with a new battery chemistry is a long and costly endeavor too: The concept of solid-state batteries has been around for well over 100 years, and it took QuantumScape nearly ten years to get to its current pre-production state; five Chinese companies had invested a total of over $1.3 billion in solid-state projects by 2019 with few commercial announcements to date. So, while there will likely be several high-performance batteries in the market by the end of the decade, QuantumScape appears to be leading the pack.

Is QuantumScape a multi-bagger?

If anything, QuantumScape's limited supply of advanced batteries may play in its favor as it may be able to sell its products at a premium.

So, only QuantumScape appears poised to supply solid-state batteries to the market at large thus far. And its projected 910,000 EV batteries by 2028 should be a drop in the bucket of its likely first customer, Volkswagen's yearly EV demand at that time.

As more news surfaces in the coming quarters, and assuming management delivers on the company's projections of manufacturing capacity and customer commitments, investors will likely strengthen their level of confidence in the company's ability to bring its product to market and meet its current financial projections.

It's definitely a story worth watching: In other words, if you believe that the future of mobility is electric, then QuantumScape appears well-positioned to be a key player in EV batteries. Foolish investors with a long-term horizon, enough patience to wait things out, and enough risk tolerance may see a small investment in QuantumScape at this stage of the business turn into a substantial part of their portfolio in the coming years.