Please ensure Javascript is enabled for purposes of website accessibility
Log In Help Join The Motley Fool
Free Article Join Over 1 Million Premium Members And Get More In-Depth Stock Guidance and Research
By John Ballard - Jan 28, 2021 at 7:42AM

Stitch Fix will have to buckle up as the competition heats up.

Amazon (AMZN 3.58%) has emerged as one of the top destinations for apparel shoppers in recent years. In 2018, Morgan Stanley predicted the tech giant would dethrone Walmart as the top apparel retailer that year, and Amazon has only continued to gain market share since then.

Stitch Fix (SFIX 2.66%) should pay close attention to Amazon, which has introduced its own personal styling service: Personal Shopper by Prime Wardrobe. Amazon has more than 150 million Prime members, and research from Retail Dive showed that nearly 80% of Prime members shop for apparel.

But if Amazon is such a threat, why does Stitch Fix continue to grow? Stitch Fix is differentiating itself in several ways, and it may have already reached the point where it controls its own destiny in the apparel space. 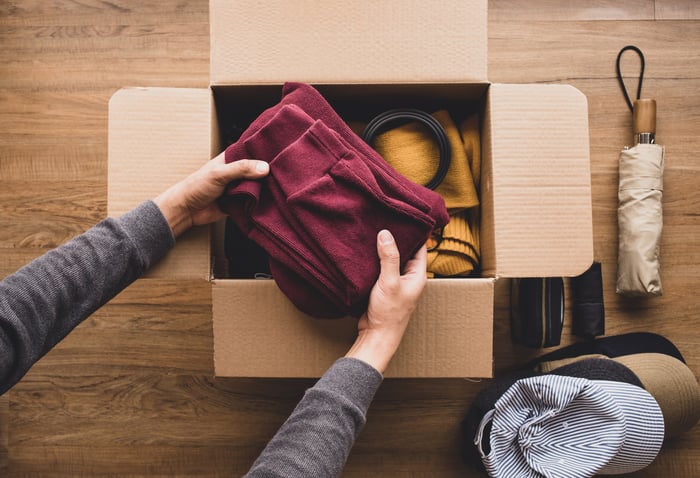 Amazon's lack of focus is a problem

Investors should be aware that, in addition to Amazon, there are at least a dozen other styling services available, including Nordstrom's Trunk Club. When $400 billion of retail spending is up for grabs, there will be plenty of competition.

Amazon's Personal Shopper service operates very much like Stitch Fix. Customers give feedback about what styles they like, and then Amazon combines fancy technology with a human touch to curate a box of items for the client.

Amazon doesn't disclose financial details about Personal Shopper, so it's difficult to know how it's performing. But Stitch Fix appears to be leading the market. For example, Stitch Fix receives far more search interest online than Amazon's Personal Shopper, based on data from Alphabet's Google Trends.

Stitch Fix experienced revenue growth of 10% year over year in the most recent quarter, and management expects growth to accelerate exiting the pandemic.

Despite the competition, Stitch Fix continues to thrive because of its complete focus on building the best personalized styling service it can provide. This differentiates Stitch Fix from Amazon, which provides many different services, including video and music streaming, and cloud services.

Moreover, many Amazon customers may not be aware that Personal Shopper exists. It's difficult to find the service on Amazon unless you know it's there and search for it.

While Stitch Fix has a dedicated mobile app that makes using its service more convenient to access, you won't find a stand-alone app for Amazon's Personal Shopper. To use Amazon's service, you must search for it within the Amazon shopping app, which is not ideal.

Things could always change, but as of now, Amazon doesn't have the focus to compete with a dedicated personal styling service like Stitch Fix. Amazon is great at many things, but not at everything.

Stitch Fix is perfecting its game

Even though Amazon is dominant in e-commerce, it's playing catch-up to Stitch Fix in personal styling.

Stitch Fix continues to get better at predicting what clients will like, as shown by how often clients decide to keep an item they receive in their Fix shipments. In the most recent quarter, 80% of first Fixes to new clients had at least one item that was purchased by the client.

The high success rate of first Fixes is impressive, given that Stitch Fix reported a record 241,000 new client additions in the quarter. This means Stitch Fix has accumulated enough data that it can accurately predict what new clients will like, where the company has limited data about style preferences.

This is a game-changer. Stitch Fix can now use data it has collected from its existing 3.8 million clients to delight and surprise new clients who receive their first Fix, potentially creating lifelong, repeat customers.

What's more, the company's improved recommendation capabilities is opening new growth opportunities, such as in kids' clothing. In the last quarter, first Fixes for kids grew 60% year over year, driven by a strong back-to-school season.

These are significant wins for Stitch Fix, as it competes in the intensely competitive apparel market, which is much bigger than Amazon. Stitch Fix will have to keep innovating to stay ahead. Investors should keep an eye on the rate of new client additions each quarter, and on how the company's direct buy initiative is working to keep those clients engaged.

Still, the company is introducing new ways to shop the service (such as "Shop Your Looks"), entering new categories (like kids' clothing), expanding its inventory selection, and continuously improving its recommendations. At this rate, Stitch Fix looks like it will control its own destiny.