Please ensure Javascript is enabled for purposes of website accessibility
Log In Help Join The Motley Fool
Free Article Join Over 1 Million Premium Members And Get More In-Depth Stock Guidance and Research
By Alexander Carchidi - Jan 29, 2021 at 6:22AM

With its vaccine projects terminated, Merck needs its coronavirus therapeutics to pull through.

Setbacks in clinical research happen all the time in the pharmaceutical industry, but that doesn't stop them from being disappointing for investors and patients alike. As of Monday, Merck (MRK 1.23%) stopped work on both of its coronavirus vaccine candidates after they failed to produce favorable results in early-stage clinical testing. While its candidates appeared to be safe, neither was capable of producing stronger immunity than what follows a coronavirus infection.

Given that its coronavirus vaccine programs were initiated with remarkably little fanfare and long after those of major competitors like Pfizer, investors may be bristling at the company's recent lukewarm performance. But its stock only took a small hit in the aftermath of the news, and it still has a pair of therapies for COVID-19 in development. Will these two treatments be enough to drive growth for shareholders, or is its future position in the market for coronavirus products too tenuous to bet on? 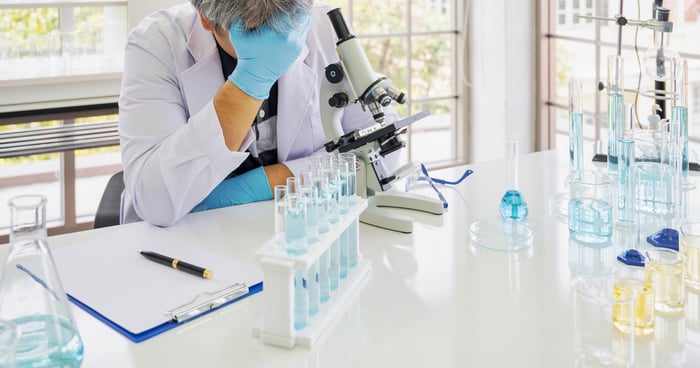 Details on Merck's antiviral are sketchy

With its vaccines out of the picture, Merck still has two coronavirus projects in the works: MK-4482, an antiviral, and MK-7110, an anti-inflammatory. MK-4482 is being developed in conjunction with an outside collaborator, Ridgeback Biotherapeutics. Merck made a deal to acquire OncoImmune, the biotech that was previously working on MK-7110, in November.

So far, information on MK-4482's safety and efficacy is scarce. The drug is intended to prevent recently infected and symptomatic patients from worsening, thereby potentially preventing lengthy hospitalizations. If it gets approved, it might be a direct competitor to Gilead Sciences' antiviral remdesivir, which earned the company $873 million in the third quarter alone.

Even with a ballpark estimate for the potential revenue in view, investors have few clues about how the project is going. Management has explicitly stated that it prefers not to provide a regular drip of updates from the program unless there is something concrete to report. Nonetheless, Merck indicated that it could give an update on the drug's efficacy sometime in the first quarter, but the combined phase 2/3 clinical trial won't conclude until May.

For all of the uncertainty surrounding its antiviral project, Merck may well have a winner on its hands with its novel anti-inflammatory therapy, MK-7110. In short, this could be the drug that doctors desperately need to save patients who are hospitalized and severely ill with COVID-19. According to an interim analysis of the phase 3 clinical trial data, patients treated with MK-7110 had a 50% lower risk of death or respiratory failure compared to those given a placebo. That's an extremely promising finding, and full results from the trial are expected sometime this quarter.

Shareholders should be excited, especially because development efforts have already led to revenue. Late last year, the U.S. government agreed to pay as much as $356 million for up to 100,000 doses of MK-7110, set to be delivered in the middle of 2021 if the drug is approved for sale. That's peanuts compared to Merck's trailing-12-month revenue of $47.35 billion, but it could be just the start.

If the U.S. Food and Drug Administration (FDA) gives the company the green light, it's highly likely that global interest in the drug will rise, leading to further purchasing activity. It's reasonable to expect that the stock could get a bump both with the FDA's announcement and then again when it reports its new revenue from sales later in the year.

In summary, there's still a lot to look forward to even without the two vaccine candidates in play. If you're considering an investment in Merck or another major pharmaceutical company, keep an eye out for any announcements of clinical trial data. While the stock is unlikely to surge anytime soon, investors should interpret increasing media coverage and positive early trial data as good signs.