All of these stocks have tripled in just the past three months. Are the naysayers right about them -- or just behind the times?

The stock market has been awash in strong-performing companies lately. Large numbers of stocks have doubled or tripled over the past year, and some have gained even more. And for many of those stocks, a good portion of the gains have come fairly recently.

But the Wall Street experts aren't always quite so optimistic about these investments. For some of those now-popular stocks, analysts have set price targets that are far below current levels. This suggests that Wall Street's finest believe that the recent surges in their share prices have overshot the mark -- and that they could come falling back to earth in short order. 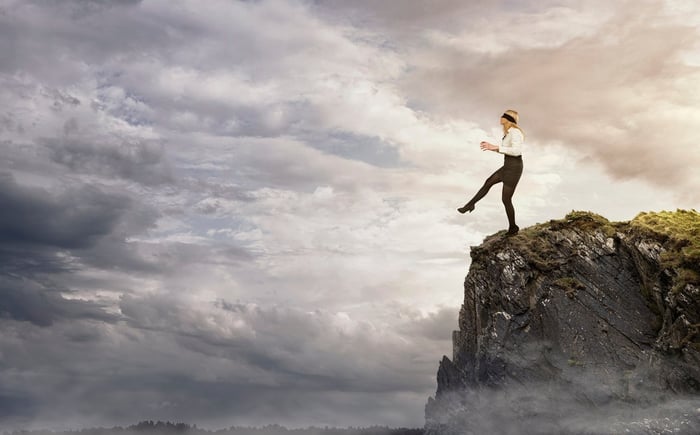 Below, we'll look at three popular high-flying stocks, all of which have at least tripled since late October, and consider whether any of them have further to run. Stock analysts are bearish -- but there's more to the story. 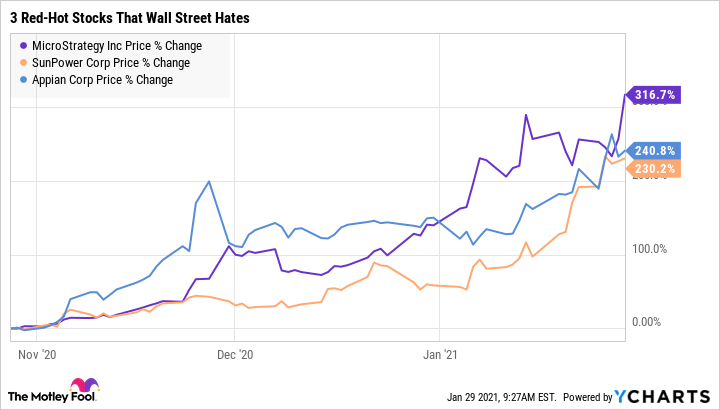 MicroStrategy (MSTR -3.45%) has had an amazing run in the market recently -- its stock has quadrupled since late October. However, that surge doesn't have much to do with the company's fundamental business.

MicroStrategy is a developer of application software that helps companies analyze their data. That's been a high-growth niche lately, but MicroStrategy hasn't reaped the rewards. Total revenue has been stagnant for a decade now as the company has tried to transition into a subscription-based model that's less reliant on licensing revenue.

Stock analysts haven't been able to keep up. Citi boosted its price target on the stock by $75 per share on Friday, but it didn't change its sell rating on the stock. Moreover, even the raise only brought the price target up to $325 per share -- more than 50% below the $680 per share that MicroStrategy stock fetched Friday morning.

Going forward, MicroStrategy's fortunes will be almost entirely tied to bitcoin, especially as it contemplates further leverage to take a larger position in the cryptocurrency. That could pay off, but Wall Street seems to think that the stock's price is too high.

The solar power industry has done well across the market lately. The share price of industry leader SunPower (SPWR -10.78%) has climbed by 230% since late October.

SunPower has done a little of everything in the solar industry at times, but recently, it's worked to reduce its capital footprint by concentrating on higher-margin businesses. It spun off its solar panel manufacturing division into a new company, Maxeon (MAXN -8.91%), and is now working to advance technological innovation in the solar arena, along with marketing and offering cutting-edge solar products and services like battery storage solutions.

SunPower recently fetched $55 per share, but stock analysts don't have nearly that much enthusiasm about the company. The average price target among those covering SunPower is a bit above $24 per share, which implies about 55% downside from current levels. The low target is $12 per share, which would be a drop of almost 80% from here.

Even relatively bullish analysts are losing some confidence in SunPower. On Friday, Piper Sandler cut its rating on the solar stock from overweight to neutral, and while it left its $35 per share price target unchanged, it said that the big stock price increase doesn't seem to have a good fundamental explanation. Without obvious catalysts to spur further investor interest, SunPower could struggle to climb from here.

Finally, Appian (APPN -1.30%) has capitalized on the digital transformation that's going on across the world. The provider of low-code software platforms allows its clients to produce customized apps much more quickly and efficiently, and Appian has enjoyed considerable growth in sales -- and specifically, in recurring revenue. That's helped send the stock 240% higher in three months.

Appian is just one of many software-as-a-service stocks that have generated some controversy for their price moves. Its core business is definitely strengthening, but the size of its recent share price jump has many analysts troubled. That's why even though it's trading at around $220, the average target price among analysts is just $98 per share.

However, that target number has crept upward lately. Just this month, Needham more than doubled its price target to $193 per share, and Morgan Stanley (MS 0.04%) gave a more modest $20 boost to bring its target to an even $100. If Appian can keep executing well, then it might well keep its share price where it is -- and let analysts keep boosting their targets accordingly.

Make your own calls

Wall Street has pros who pore over companies' financials all day long, but they're not infallible. Among these stocks, MicroStrategy's link to bitcoin will give its stock as much volatility as the cryptocurrency itself, while arguments that SunPower has come very far quite quickly are compelling. Appian, though, could be in the early stages of a much larger secular trend that could carry it much higher in the long run.

If you like what you see in these companies, don't let Wall Street analysts' concerns stop you. Do your own research and come to your own conclusions, and then invest accordingly.