Please ensure Javascript is enabled for purposes of website accessibility
Log In Help Join The Motley Fool
Free Article Join Over 1 Million Premium Members And Get More In-Depth Stock Guidance and Research
By Courtney Carlsen - Feb 2, 2021 at 8:00AM

2020 was a record year for the mortgage industry thanks to low interest rates and changing behaviors. What does 2021 have in store for the industry?

The mortgage industry broke records in 2020. While a global pandemic gripped markets, actions by the Federal Reserve brought interest rates to record-low levels. This spurred growth in loan originations, both for new home purchases and home refinancings.

In addition, other macro factors changed life as we knew it in 2020. Nationwide lockdowns and other precautionary procedures saw more people working remotely than ever before. As a result, people spent more time at home. For those living in the city, it became attractive to upgrade to bigger homes in the suburbs or in other, cheaper metropolitan areas.

This dramatic shift in consumer behaviors has many wondering what 2021 has in store for the mortgage industry. Here are five trends I'm looking for in the industry this year. 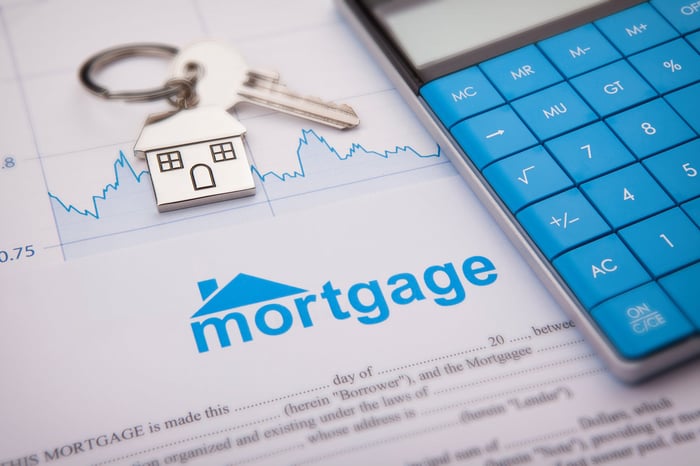 In March 2020, in the midst of nationwide lockdowns, the Federal Reserve dropped the benchmark federal funds rate to record-low levels. As a result of Fed intervention, mortgage rates hit their lowest levels in almost 50 years, according to Freddie Mac. The average rate for a 30-year fixed-rate mortgage was as low as 2.67% in mid-December and actually dropped once again in January to 2.65%, according to Fannie Mae.

Freddie Mac forecasts that 30-year fixed-rate mortgages will see a modest rise, with rates expected to hover around 2.9% in 2021 and 3.2% in 2022. A steady rise in mortgage rates could ultimately have the effect of slowing down mortgage originations -- more on this shortly.

2. A steady migration to suburbs (but not a mass exodus)

While there has been speculation that there would be a mass exodus into suburbs, Fannie Mae does not foresee it playing out quite this way. While the lender doesn't believe in a mass exodus, it does foresee a continued migration out of expensive metropolitan areas and into less expensive metro areas, as well as the surrounding suburbs.

The expansion of remote working will enable families to move into suburbs and upgrade their houses as families get used to spending more time at home. For this reason, they believe single-family housing starts will increase 12.5% compared with last year.

3. Home sales and home prices expected to move higher -- but not nearly the same rate as 2020

According to the Economic & Strategic Research Group at Fannie Mae, home sales are projected to come in 3.8% higher this year than in 2020. Researchers expect housing activity to remain strong in the coming year, but nowhere near the rapid pace observed in the second half of 2020.

If trends observed at the end of 2020 are any indication, home values are expected to continue their climb higher. According to the S&P CoreLogic Case-Shiller Home Price Indices, home prices rose by 9.5% in the month of November, compared with the same month in 2019. This is the strongest annual growth rate by the index in over six years, and one of the biggest gains in index in 30 years.

Zillow says it expects home values to increase 10.3% through November. In addition, Danielle Hale, chief economist at Realtor.com, said, "Our 2021 outlook expects an eventual moderation to price gains as home construction ramps up and the widespread availability of COVID vaccines bring more flexible sellers back to the housing market, but it will be some time before these changes bring relief."

4. Originations will be down compared with 2020

5. A drop in commissions revenue for those in the industry

As a result in declining originations, Fannie Mae expects commissions to decline as well. This seems reasonable, given the decline in origination activity projected to be within 10% and 25% between the two major government-sponsored entities.

A reduction in commissions would be due in large part to decreased refinancings, and will hurt those companies that saw a boom in revenue and net income in the past year. At the very least, investors in some of the biggest mortgage finance lenders -- like Mr. Cooper Group, PennyMac Financial Services, and Rocket -- could expect to see a slowdown in revenue and income growth when compared with 2020's growth.

2020 was an unprecedented year and drove incredible growth in the mortgage finance industry, especially in the second half of the year. Pent-up demand and a drastic reduction in interest rates drove record levels of mortgage originations, which include new purchases and refinancings.

However, these figures will be much harder to replicate for many of the biggest lenders. Current trends suggest that 2021 could see growth, but investors should proceed with caution.