The elevator and escalator manufacturer sets positive if modest growth targets for the current year.

Following its spinoff from Raytheon Technologies on April 3, 2020, global escalator and elevator manufacturer and servicer Otis Worldwide (OTIS 1.39%) found quick favor in the U.S. markets. Shares of Otis soared nearly 55% last year in part because the company suffered only a slight decline in organic revenue growth during a pandemic-impacted year.

The company's fourth-quarter 2020 report, issued on Monday, showed incremental improvement at year end. Management also issued a full-year 2021 forecast, which in itself is a mark of confidence given uncertainty around the lingering global impact of COVID-19. Below, we'll review highlights from the earnings filing and look ahead to management's expectations for the rest of this year. 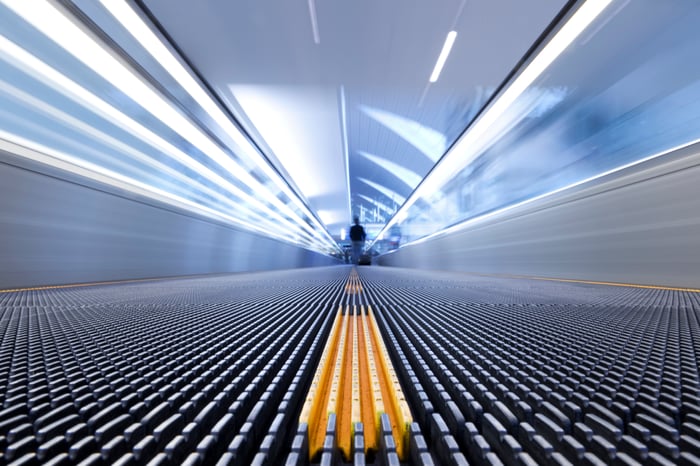 For investors not as familiar with this new entrant to the public markets, the last three months are typical of its business model. While new equipment sales grew at a fast clip of 7.2% against the prior-year quarter, they made up only 44% of revenue, at $1.49 billion. Service revenue, which increased at a much slower pace of 1.9%, comprised 56% of the company's top line.

In fact, Otis can almost be thought of as more of a servicing company than a manufacturer, as this is where its profits are concentrated. In the fourth quarter, the organization recorded $421 million in operating profit from service revenue versus just $80 million in operating profit from new equipment sales. The company services over 2 million installed units globally and has a long-term revenue stream divided between repair and maintenance (R&M), and the modernization of existing units. Modernization encompasses aesthetic upgrades for aged elevators as well as the installation of Internet of Things (IoT) sensors that drive analytical maintenance, repair, and diagnostic data within the company's Otis ONE IoT platform.

During management's earnings conference call, CEO Judy Marks noted that the company has cumulatively installed 540,000 Otis ONE units into elevators worldwide -- roughly 25% of its service base -- and has a "medium-term" goal to reach 60% penetration of Otis ONE units in this base. As building owners increasingly embrace IoT monitoring to trigger money-saving predictive maintenance, this goal seems well within the company's reach.

Management provided an optimistic if slightly cautious outlook on Monday following a year in which sales declined by roughly 3%. The company anticipates year-over-year top-line growth of 4.5% to 6.5%, which equates to a 2021 revenue range of $13.3 billion to $13.6 billion. Organic revenue growth is expected to fall between 2% and 4%.

The organization is willing to submit financial guidance to investors (even as many manufacturing peers refrain from doing so) partially because its new equipment backlog expanded by 6% year over year in the fourth quarter. In addition, management observed during the earnings call that job site activity is picking up, and building access is improving as economies around the world begin the long process of returning to pre-COVID activity levels.

Otis has already beefed up service and sales capacity in key markets in advance of an economic rebound. CEO Marks stated on Monday that the company added 850 distributors and agents in China last year to tap the country's fast construction growth and service needs. And Otis is introducing its compact, digitally native elevator model, the GEN360, in the Europe, Middle East, and Africa (EMEA) market this year.

Industrial stocks as a group have proven difficult to navigate over the past year. But Otis Worldwide, with its focus on technology-driven innovation, possesses a clear line of sight to growth. If the global economy recovers soundly in the near term, Otis is positioned to reap robust sales and may end up exceeding its earnings benchmarks over the next several quarters.

Is Otis Stock a Buy Now?