Please ensure Javascript is enabled for purposes of website accessibility
Log In Help Join The Motley Fool
Free Article Join Over 1 Million Premium Members And Get More In-Depth Stock Guidance and Research
By Taylor Carmichael - Feb 3, 2021 at 6:50AM

Right now, most investors are oblivious to OptimizeRX and eXp World Holdings. Here's why you should know their names.

Sometimes, companies doing amazing things fly under the radar. eXp World Holdings (EXPI 4.99%) and OptimizeRX (OPRX 12.30%) are two such businesses. eXp World shareholders are up 985% over the last year. The stock's run up from its small-cap status to reach a $8.3 billion market cap in an incredibly fast period. It happened so quickly that a lot of investors are still oblivious. But it's early days, and sooner or later the financial press will notice what's happening here.

OptimizeRX is another obscure stock. Its shareholders have quadrupled their money over the last 12 months. OptimizeRX is still very much a small-cap, recently valued at just $713 million. Let's find out why these two stocks have run up so far, so fast, and whether it's too late to get in on the action. 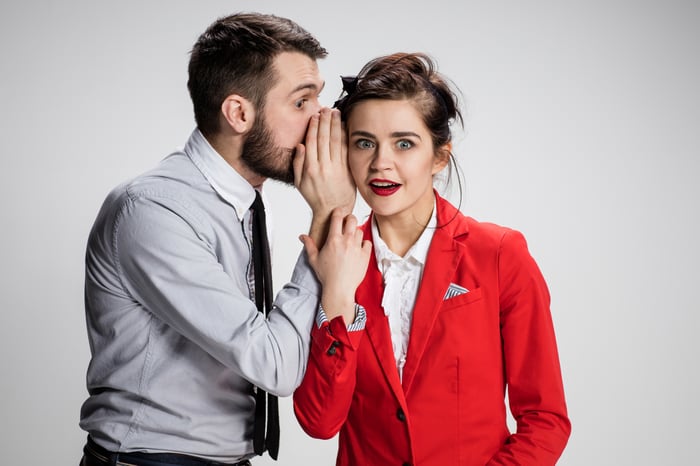 Launched in 2009, eXp World is a holding company that is revolutionizing the way we buy and sell houses. The company has a virtual business model, so it's selling homes through an internet portal. But unlike some of its online competitors, eXp World is not kicking real estate agents to the curb. Far from it. The company is designed to help real estate agents -- particularly top sellers -- prosper.

One of the tough times in a commission business is January, the beginning of the year, when you're starting from scratch. As Michael Valdes, Executive Vice President for International Expansion at eXp World, said on the Cliff's Notes real estate podcast, "The top agents in the world...they start at zero. With this model you don't...you start at a base that gives you a revenue stream that is in perpetuity...you start from a floor."

What is he talking about? eXp World is very generous toward its agents. The company takes 20% of what an agent makes in commissions, up until you hit $80,000. Once you hit that number, you keep 100% of your commissions. But eXp World also rewards its agents as recruiters. If an agent brings other real estate agents into the company, they receive 3.5% of the revenues that those new recruits make for the company. The more agents you recruit, the higher your passive income will be. Valdes noted:

This eXp model...is truly a disruptor in the market place...where somebody has the ability, and the gift, of building generational wealth. This is something where you are looking at your efforts now of building something that's there for your children and your grandchildren.

But is it too late to buy shares? (For that matter, if you're a real estate agent, is it too late to join the company?) Not at all. eXp World sold $23.6 billion worth of real estate in its most recent quarter. The real estate market in the U.S. is worth at least $1.4 trillion. So, eXp World has not even grabbed 2% of the market yet. And that opportunity is just for the U.S. The rest of the world has real estate, too, and eXp World is looking to capitalize.

In just a few months, the company has expanded from four countries (US, UK, Australia and Canada) to 11 (adding France, Italy, Portugal, Brazil, South Africa, India and Mexico), plus two additional territories (Hong Kong and Puerto Rico). In the process they've added 6,000 real estate agents, bringing their total to 41,000 around the world. 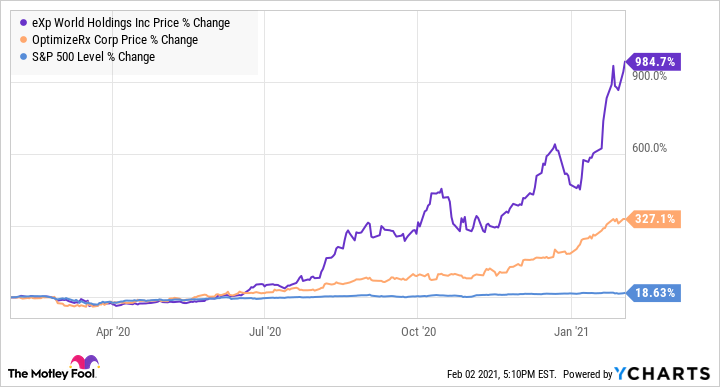 2. OptimizeRX is changing the way drugs are sold

Another job that is being seriously disrupted by the internet is pharmaceutical sales rep. Yes, healthcare is heavily regulated by the U.S. Food and Drug Administration (FDA). But even after a company earns regulatory approvals, a pharmaceutical or a medical device business needs a doctor to jump on board, and prescribe that pill or use that medical device.

Typically a sales rep has to communicate directly with a care provider and give them a short spiel on why a new drug or medical device might work for their patients. This is a pivotal meeting for the success of a product. But physicians are already overworked, and many actively avoid sales reps. Up to 55% of doctors limit rep access. So, how do drug companies best communicate with doctors and increase awareness of medical breakthroughs?

Enter OptimizeRX. This company has a virtual model. Its customers are the who's who of Big Pharma: AbbVie, GlaxoSmithKline, AstraZeneca, Merck, Eli Lilly, Pfizer, Novartis, Sanofi, Amgen, Medtronic, and Dexcom. OptimizeRX helps these companies reach doctors via the company's marketing platform, served up to doctors virtually on more than 370 electronic health records (EHR) databases. As many as 90% of physicians use EHR every day, and they average almost six hours of use every day. OptimizeRX can target messages to doctors at precise points in the doctor's ordinary internet workflow. And OptimizeRX reports an amazing 520% return on investment (ROI) for the pharmaceutical companies that use its service.

The company is firing on all cylinders right now, in part because the COVID-19 pandemic has made access to doctors even more difficult for sales reps. OptimizeRX reported 110% revenue growth in its most recent quarter. The company forecasts 117% growth for the fourth quarter with positive net income.

OptimizeRX is still a small operation, reporting $34 million in sales over the last year. But the company has $170 million worth of sales in the pipeline, and reports seeing a shift to recurring revenue streams from its pharmaceutical partners. While OptimizeRX is -- without a doubt -- a niche business, its future looks very bright.