Please ensure Javascript is enabled for purposes of website accessibility
Log In Help Join The Motley Fool
Free Article Join Over 1 Million Premium Members And Get More In-Depth Stock Guidance and Research
By Matthew DiLallo - Feb 3, 2021 at 11:47AM

The global infrastructure giant anticipates 2021 being a very busy year.

Brookfield Infrastructure (BIP -1.25%)(BIPC -0.41%) showcased the strength of its business model in 2020. While it wasn't entirely immune to the headwinds facing the global economy from the COVID-19 outbreak, it produced solid results for the year, fueled by a strong fourth-quarter rebound. That gives it lots of momentum to continue delivering strong results in 2021.

Brookfield Infrastructure's FFO jumped more than 11% during the fourth quarter. That pushed its full-year results up to $1.45 billion, or $3.13 per share -- increases of 5.1% and 2.3%, respectively -- despite several headwinds, most notably a weaker Brazilian real, which reduced its FFO by $100 million for the full year. Driving the year-end surge were strong results in three of its four business units:

FFO from the company's utility businesses declined by 5.6% during the fourth quarter but was up 6% for the full year after adjustment for the impact of a weaker Brazilian real. Powering that growth were $340 million of capital projects it placed into service last year and rising rates due to inflation-linked rate structures.

Transportation-related FFO jumped 15.6% during the fourth quarter, pulling that segment roughly even for the full year despite significant disruptions to global trade due to the pandemic. This segment benefited from the recent acquisitions of its North American rail operation and LNG export terminal. Those additions helped offset weaker volumes at its toll roads and container ports.

FFO from Brookfield's midstream operations surged 34.4% during the fourth quarter and 18% for the full year. Fueling that improvement were its organic growth initiatives, as it benefited from favorable market conditions -- especially at its gas storage operations -- and completed two expansion projects.

Finally, data-related FFO leaped 45.5% in the fourth quarter and nearly 50% for the full year. Powering that step-change result were a combination of organic growth and the roughly $1 billion the company has deployed on new investments over the past two years, including a portfolio of telecom towers in India. 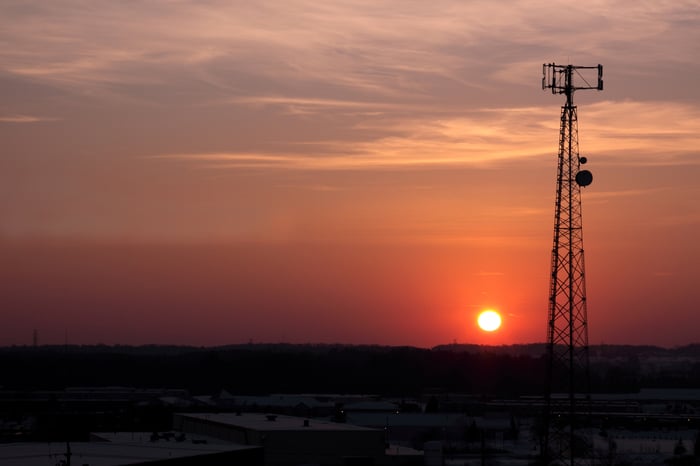 Brookfield continues to actively recycle capital by selling mature assets and redeploying the proceeds into new opportunities. It invested $2.5 billion in new investments and capital projects last year while generating more than $700 million via asset sales. The company also quickly cashed in on some of its recent investments. It purchased more than $600 million of shares in several publicly traded infrastructure companies during the market sell-off in early 2020, selling several as they recovered, recording a quick $60 million gain.

The company has continued to be active this year. It recently sealed a deal to sell its North American district energy business, Enwave, for $4.1 billion in two separate transactions. Brookfield will receive $950 million in proceeds from that sale, which should close by the middle of this year. That sale will bolster Brookfield's already sizable liquidity pool, which stood at $3.7 billion at the end of 2020.

In the near term, liquidity should keep rising because Brookfield has additional asset sales under way, which should bring in an incremental $2 billion when Enwave is included. However, the company expects to redeploy at least $2 billion of its liquidity this year on new opportunities. It's hoping to convert at least one of its investments in a publicly traded infrastructure company that it still holds into a larger transaction this year. In addition to that, it expects governments to increasingly look to sell infrastructure assets to pay off some of the debt they issued to fund pandemic-related stimulus programs and new infrastructure-related investments. Brookfield believes it's well-positioned to capture these opportunities thanks to its top-notch balance sheet and abundant liquidity.

Poised for a big year

Brookfield believes its best days are still ahead. The company anticipates that the global economy is entering an infrastructure super-cycle as governments take advantage of low interest rates to stimulate their economies with new infrastructure projects. That should provide the company with new investment opportunities, which should help fuel FFO and dividend growth for years to come.