Please ensure Javascript is enabled for purposes of website accessibility
Log In Help Join The Motley Fool
Free Article Join Over 1 Million Premium Members And Get More In-Depth Stock Guidance and Research
By Rich Duprey - Feb 3, 2021 at 11:00AM

Executive orders and memorandums are targeting the private prison industry.

Among the flurry of executive orders President Joe Biden issued in the first days of his presidency was one directing the Justice Department to not renew its contracts with private prison operators. That could severely affect CoreCivic (CXW 0.50%) and GEO Group (GEO 0.00%), both of which generate a substantial portion of their revenue from federal government contracts.

However, since the executive order is for non-renewal and not immediate cancellation, it doesn't mean Biden has killed off the private prison industry -- at least, not yet. 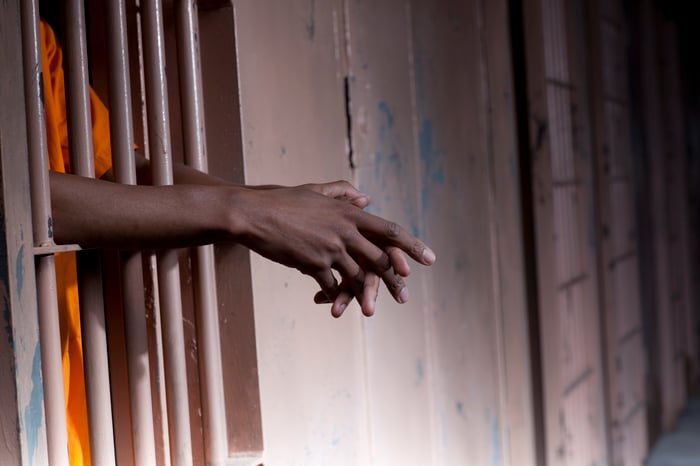 Because Biden's executive order only applies to the Department of Justice (DOJ), that means only BOP and the U.S. Marshals Service are affected, not ICE, which is part of the Department of Homeland Security (DHS). As the table below shows, most of the the prison operators' revenue will be shielded from the order, though a significant portion could still be going away.

Reuters estimates that will only affect about $1 billion in revenue total between the two private prison operators, which suggests it will not be the fatal blow it initially seemed.

Moreover, because the executive order was only to let current contracts expire, not end them immediately, CoreCivic and GEO Group will still have a number of years to go before they lose that revenue. Of CoreCivic's 28 lease contracts, 15 were due to expire beginning in 2022, and eight don't expire until five years from now. The bulk of GEO Group's contracts also begin expiring in 2022 or later.

Both correctional facility operators had a large number that were expiring in 2020, and we'll find out in a few weeks when they report earnings how many were renewed ahead of the executive order. Still, that's not the whole story.

Within hours of Biden's inauguration, the Department of Homeland Security issued a 100-day moratorium on deporting illegal immigrants who were already in the country unless they posed a threat to national security.

While a federal judge issued a temporary injunction to keep the policy from being implemented, the moratorium indicates the new administration intends to dramatically reduce the number of people held in custody awaiting deportation. Indeed, evidence submitted to the court by the state of Texas, which sought the injunction, showed ICE sent a memo directing its agents to "release them all, immediately." Illegal immigrants could no longer be held on the grounds that they had no sponsor to take them in.

If that policy is allowed to resume, there could be a mass exodus of detainees from CoreCivic and GEO Group facilities. Unlike prisons, where federal, state, and local jurisdictions own and operate their own facilities, ICE has no detention facilities of its own and relies upon private operators or county jails to hold illegal immigrants.

Losing these immigration detainees is what could be the fatal blow to CoreCivic and GEO Group.

CoreCivic and the GEO Group are living on borrowed time and their stocks have lost between 50% and 60% of their value over the past year.

Because the two prison operators currently house only 9% of the U.S. prison population and the executive orders call for non-renewal rather immediate cessation of their contracts, they will be able to survive for several years. Yet an overhaul of the country's immigration policies could wreak havoc on their operations, particularly if it entails the immediate release of detainees. Private prisons are already a controversial investment, so investors should tread carefully before considering these stocks for their portfolios.