Please ensure Javascript is enabled for purposes of website accessibility
Log In Help Join The Motley Fool
Free Article Join Over 1 Million Premium Members And Get More In-Depth Stock Guidance and Research
By Royston Yang - Updated Feb 3, 2021 at 8:17AM

The food delivery giant is expanding into multi-channel delivery by forging partnerships with key retailers.

Shares of DoorDash (DASH 6.87%) surged 35.4% in January, according to data provided by S&P Global Market Intelligence.

The food delivery company's shares have recovered strongly after falling to $140 in late-December, and are close to scaling a new all-time high. 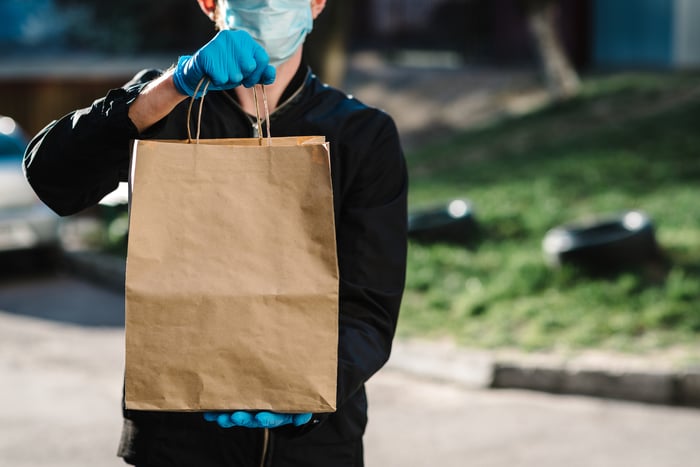 DoorDash is the leading food delivery company in the U.S. with a 58% category share in suburban markets as of October 2020, according to research by Edison Trends. The company has grown significantly since it was started in 2013, with over 390,000 merchants on its platform serving more than 18 million customers.

With the COVID-19 pandemic still raging, people are relying on food deliveries more than ever to stay safe and ensure minimal physical contact with others at crowded locations. Total U.S. food delivery app revenue increased by 20.5% year over year from $22 billion in 2019 to $26.5 billion in 2020, benefiting all players within the sector. Investors are also optimistic that DoorDash may finally post a profit in the current fiscal year as losses narrowed significantly from $534 million in the first nine months of 2019 to $149 million in the same period last year.

Statistics from Euromonitor show that a total of $302.6 billion was spent in restaurants and outdoor dining locations in 2019, and DoorDash's gross order volume in that year represented less than 3% of this total spend. This data shows the potential for the company to grab more market share in a fragmented market with a slew of smaller players, while also highlighting how large its total addressable market is.

The company is now positioning itself as an all-around delivery service as it forged partnerships with Walgreens and 7-Eleven as well as grocery chain stores including Meijer. No longer confined to just restaurant delivery, DoorDash is expanding its distribution nodes to scale up its business. It looks like exciting times are ahead for investors as the company forges a new path for itself by creating multiple streams of revenue.