Please ensure Javascript is enabled for purposes of website accessibility
Log In Help Join The Motley Fool
Free Article Join Over 1 Million Premium Members And Get More In-Depth Stock Guidance and Research
By Scott Levine - Feb 3, 2021 at 7:35AM

It doesn't stem from Reddit, but this stock has soared into the stratosphere recently.

Nope. Neither political volatility nor a pandemic seem to be good enough reasons to break this market's stride and slow it down. Over the past year, the S&P 500 has soared 16%, consistently reaching new all-time highs to the delight of investors.

While some stocks have bounded higher for valid reasons, others now feature astronomical price tags due to investors overestimating the value of the stocks. Take Plug Power (PLUG 8.25%), for example, which has skyrocketed 1,590% over the past 12 months. One of the more familiar names associated with hydrogen and fuel cells, Plug Power has captured the imagination of both renewable energy and growth investors alike. But why? Let's take a closer look at what's behind the stock's recent meteoric rise.

So, just how pricey is this hydrogen purveyor?

Before examining the factors pushing Plug Power's stock price to its lofty valuation, let's first consider just how expensive shares are. Since Plug Power doesn't generate a profit or cash flow -- more about that in a bit -- traditional valuation metrics are useless. Instead, we can consider the stock's price-to-sales ratio. Currently, shares are trading hands at nearly 66 times sales -- an exorbitant price tag considering the P/S ratio for the S&P 500 is only 2.7. That's only part of the picture, though. It's also worth comparing the present valuation to its previous ones. After all, the stock seems expensive to the market writ large, but there are many stocks that consistently trade at a loftier valuation. This, however, is not the case with Plug Power. According to Morningstar, the stock's five-year average sales multiple is five. A quick peek at one of Plug's peers, Bloom Energy, further illustrates how expensive it has become. Bloom Energy currently trades at a much more reasonable 6.6 times sales.

While Plug Power's proponents have touted the promise of fuel cells and hydrogen solutions for years, those in charge of making decisions regarding how power is sourced -- politicians, business leaders, etc. -- have traditionally shown little interest in eschewing traditional power sources. But that seems to have changed recently. Over the past year, interest in hydrogen solutions has grown considerably as renewable energy assumes a more prominent position on the global energy landscape. Last July, for example, the European Union released its EU Hydrogen Strategy, which targets the installation of at least 6 gigawatts (GW) of renewable hydrogen electrolyzers in the EU and production of up to 1 million tonnes of renewable hydrogen by 2024, with further additions in subsequent years.

And it's not only those across the pond who are espousing enthusiasm for hydrogen. Two years ago, South Korea announced its goal of producing more than 6 million fuel cell vehicles and 1,200 refueling stations by 2040; in addition, it's targeting 15 GW of fuel cell capacity for the energy market by 2040.

Happy with the present and ecstatic about the future

Looking to Plug Power as an auspicious opportunity, investors have accepted the company's inability to generate profits or cash flow for the time being. Instead, investors have been spurred on by the company's noteworthy revenue growth and securing of big name customers like Amazon and Walmart. 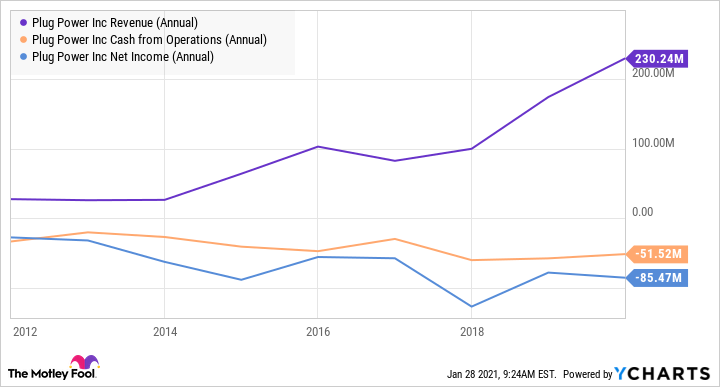 To investors' delight, the upward trending top line shows little sign of slowing down. The company recently reported that it had surpassed its 2020 revenue guidance, and it also raised its 2021 forecast. Separately, Plug Power estimates revenue will continue to grow at a steady clip, reaching $1.2 billion in 2024.

For a long time now, shareholders have been swept up in the belief that Plug Power's time has nearly come, hypnotized by the company's consistently growing revenue. It's understandable how they could arrive at this conclusion, as strong revenue growth is a telltale sign of a growth stock. What they seem to be turning a blind eye to, however, is the fact that the company has never consistently generated a profit or cash flow. And it's not as if the company hasn't had time to prove itself; it has been a public company for more than 20 years.

Is now the time to pony up for the pricey Plug Power?

Smart investors know that a high price tag, in and of itself, is hardly a deterrent to picking up shares of a quality company. In the case of Plug Power, however, the stock's sky-high valuation should give investors pause. A company's ability to grow the top line is great, but it means little if profits remain forever elusive.