Please ensure Javascript is enabled for purposes of website accessibility
Log In Help Join The Motley Fool
Free Article Join Over 1 Million Premium Members And Get More In-Depth Stock Guidance and Research
By Jim Halley - Updated Feb 6, 2021 at 1:10AM

These companies have awesome upside potential, and they won't break the bank

Two of the most popular stocks on Robinhood's Top 100 list are TherapeuticsMD (TXMD 36.56%) and New Residential Investment (NRZ -1.12%), both of which trade for under $10. The investment thesis for many excited investors is these stocks have a lot of room to grow. The problem with that logic is there are plenty of reasons some stocks trade under $10, and most of them are not good.

However, there are good stocks for around or under $20 that are profitable, growing companies, with low price-to-earnings (P/E) ratios.

Telephone and Data Systems (TDS -0.57%), Tri Pointe Homes (TPH 0.54%), and Co-Diagnostics (CODX 0.40%) all have modest share prices yet stand on solid ground. All three have P/E ratios well below most of their competitors. None of the three dominate their industry, but their smaller size means they may have been overlooked by investors, providing a good opportunity for bargain hunters. 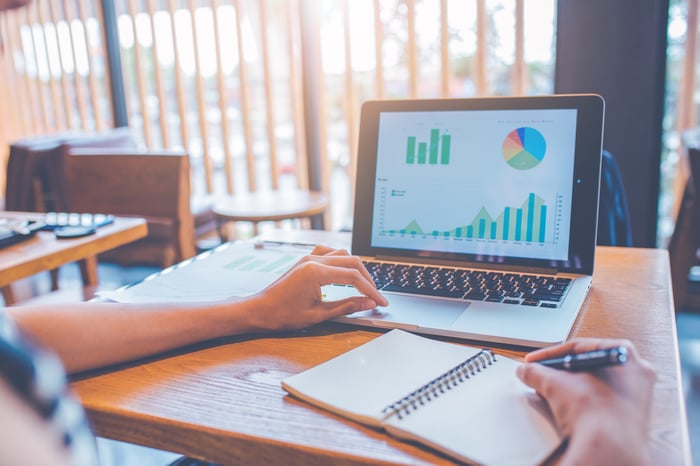 The company's stock is down more than 13% over the past year, but based on its financials, is in a solid position. Despite the pandemic, revenue was $3.8 billion, just slightly above last year's pace through nine months. The company did an excellent job of keeping costs down, so net income was $254 million, up 92% compared to the same period in 2019.

The company has a P/E ratio of about 10, about a third that of a typical telecom business. Its forward P/E is around 12, well below the typical wireless telecom's forward P/E of 26. The company has grown funds from operations (FFO) by 63% over the past three years while improving its profit margin more than 39% in that time.

In the third quarter, the company's adjusted EBITDA was up 8%. What I like is that the company has several diversified revenue streams, including $19.6 million in the third quarter in leasing revenue from the 4,246 communications towers the company owns. On top of that, it pays a quarterly dividend of $0.17 per share, which works out to a nice yield of 3.5%. 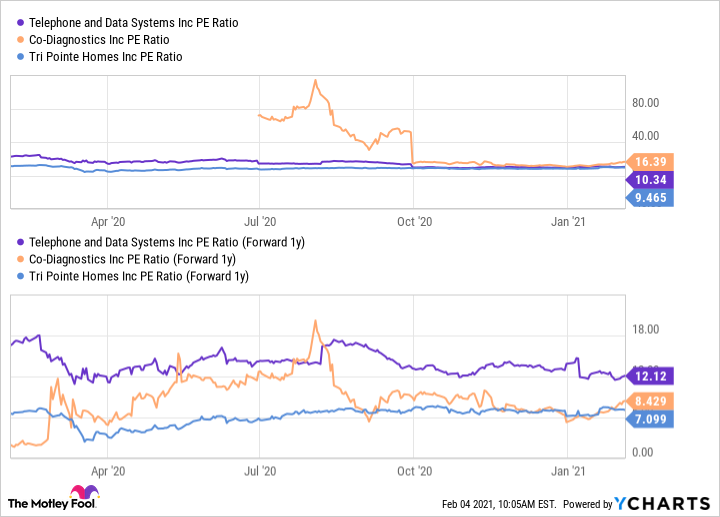 Like Telephone and Data Systems, Tri Pointe Homes is a medium-sized fish. Though it's among the top 10 homebuilders by revenue, it's dwarfed by giants such as Lennar and D.R. Horton and operates in only 10 states.

Shares in Tri Pointe Homes are up more than 25% over the past year. Despite that, its P/E and forward P/E are still low at 9.5 and 7.7, respectively, thanks to improved revenue this past year. Typical home building companies have an average P/E and forward P/E of 19 and 11.4, respectively, so Tri Pointe's shares are well priced in the industry. Low financing rates and a pandemic-fueled drive for people to move to less crowded areas has spurred a real estate boom the company is benefiting from.

The company just united its six builder brands under Tri Pointe Homes, so that should bolster the company's name recognition. Though the pandemic has certainly helped its home sales, the company was already steadily growing revenue by 18% over the past 10 years.

This molecular diagnostic company's stock has climbed a crazy 348% over the past year. While the share price has jumped, it hasn't kept pace with its even more impressive revenue gains.

Through nine months, the company posted $47.4 million in revenue, a rise of 444%, driven by the company's highly accurate COVID-19 tests and as of December, said it had sold more than 10 million of them. The company said its third-quarter gross margins were 73%.

Co-Diagnostics, which has fewer than 30 employees, said last month that it anticipates its fourth quarter to be its best yet, with revenue up 20% to 25% over the third quarter.

Because the company's share price hasn't kept up with its revenue increase, the company's P/E of 15.4 and forward P/E of 9.1 are still low compared to the biotech stock's averages of 31 and 75.4.

The company has been helped by the coronavirus concerns and that may have investors wary, wondering where that revenue will come from once the pandemic ends. That's a legitimate concern, but many scientists are saying that COVID-19 will be with us for a while, so testing for it will continue. On top of that, Co-Diagnostics has shown the ability to quickly adapt with diagnostic tests for any disease that comes along, such as zika, dengue or a new flu strain.

Obviously, it's highly unlikely that Co-Diagnostics' shares will grow as fast as they did in 2020, but as the pandemic drags on, the company's revenue will continue to climb.