Please ensure Javascript is enabled for purposes of website accessibility
Log In Help Join The Motley Fool
Free Article Join Over 1 Million Premium Members And Get More In-Depth Stock Guidance and Research
By Alex Carchidi - Feb 5, 2021 at 6:30AM

Take a moment and imagine a trend that you think will be relevant for investors over the next few decades. Does it hold up for the next few centuries? If the trend you thought of is "scientific progress," the answer is a definite yes.

Of course, it's tough to invest directly in science, as it's hard to predict which areas are going to see the most advancement and whether that advancement will correspond to growing business, and subsequently, a higher stock price. Thankfully, if you invest in companies making the tools that power scientific progress -- like the three that I'll be discussing today -- you won't have time to worry about predicting the future. You'll be too busy watching your money grow over time. 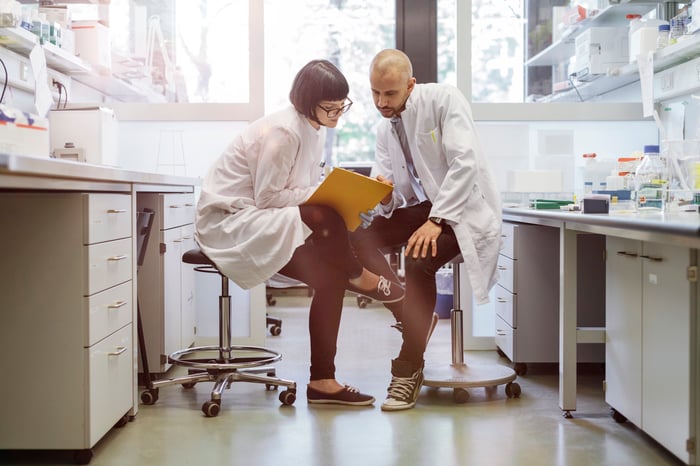 Becton, Dickinson (BDX 0.14%) makes a huge array of biopharmaceutical research supplies, laboratory hardware, and critical healthcare goods like syringes and blood collection vials. With a market cap upward of $75 billion and more than $17 billion in trailing revenue, it's also one of the largest healthcare companies in the world. It's BD's combination of diverse product offerings and sheer size that makes it so resilient over time. No matter what's in vogue with members of the biomedical community, the company sells stuff that they simply can't do their jobs without. If one product line falls out of favor, it's just one small component of BD's revenue.

This strategy has paid off for shareholders for many years, and the company is still getting better at what it does best. Over the last decade, its annual free cash flow increased by more than 144%. Management has a history of using cash and judicious amounts of debt to make fruitful acquisitions of smaller competitors, including six different companies in fiscal year 2020 alone. In sum, Becton, Dickinson is going to keep growing slowly but surely for the foreseeable future, and investors can count on it to remain relevant for decades. 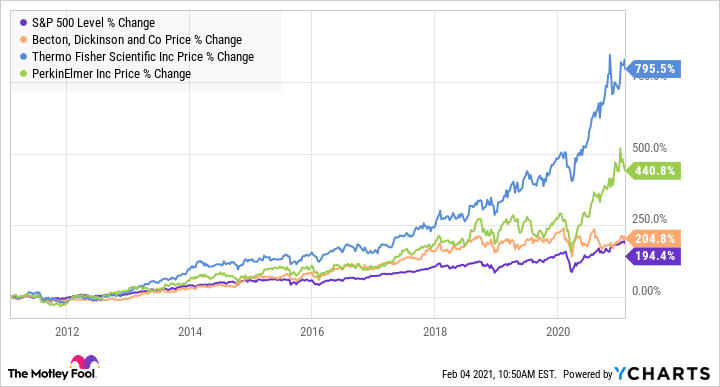 Scientists aren't known for swooning, but I've seen a few come close when their order from PerkinElmer (PKI 2.75%) arrived in the mail. In case you aren't familiar, PerkinElmer's laboratory kits enable both biomedical researchers and clinicians to learn what they need to know, and quickly. That means the company's products are in demand for multiple applications within its tightly knit target markets of laboratories and healthcare systems. What's more, its constant effort to track what researchers need means that it's always developing new and relevant goods that are directly within its area of competence.

Customers keep coming back to PerkinElmer's offerings again and again. In 2020, its immunodiagnostics segment made around $1 billion, with an estimated 85% of that revenue recurring. In its reproductive diagnostics segment, an impressive 95% of its revenue is recurring. Moving forward, the company expects its immunodiagnostics to continue growing faster than the weighted average market growth rate, suggesting that its lead is becoming stronger. Likewise, management expects that its operating profit margin will continue to expand over the next few years, paving the way for faster earnings growth. In the long term, PerkinElmer might even diversify its line of business to increase its revenue. 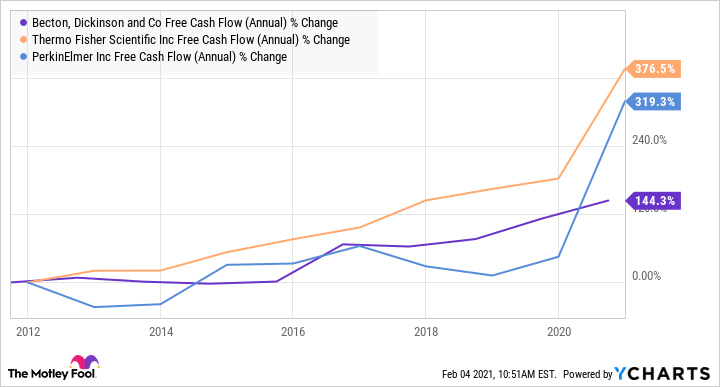 Much like Becton, Dickinson, Thermo Fisher Scientific (TMO 1.09%) is a critical supplier for healthcare systems and laboratories around the world. Of the three stocks in this list, it's the one that's the most tightly linked to scientific research. Forty-one percent of its $28.5 billion in trailing revenue comes from sales to pharma and biotechs, and 55% of its total revenue is derived from sales of highly recurring consumable goods. If that's not appealing enough, over the last decade, its annual revenue has grown at a compound annual rate of 11%, and its latest earnings report shows highly favorable performance.

Thermo Fisher launches a plethora of new products each year. It produced a coronavirus diagnostic kit and five pieces of laboratory hardware in 2020 alone. It also offers an ever-expanding selection of services for pharma and biotech, many of which have strong recurring revenue potential. As biomedical science marches onward, the company will be supporting the effort every step of the way. If the company's contributions in the last two decades are any indication, Thermo Fisher will continue to grow its revenue by making itself indispensable for years to come.