Please ensure Javascript is enabled for purposes of website accessibility
Log In Help Join The Motley Fool
Free Article Join Over 1 Million Premium Members And Get More In-Depth Stock Guidance and Research
By Brett Schafer - Feb 8, 2021 at 10:42AM

"NCAA College Football" is coming back after a seven-year gap in releases.

On Feb. 2, Electronics Arts (EA 0.96%) investors and college football fans got exciting news: After a seven-plus-year interval, the company's college football video game franchise is finally coming back. Gamers have been clamoring for an update since the last title released in 2013, and EA finally pulled the trigger. Here's what investors need to know about the announcement.

The announcement came from EA Sports' Twitter account, which posted an image that said, "College Football is coming back." The company followed up the tweet with a press release with more information, however, details on the game were slim and there is no set date for a release. Investors should watch for more announcements in the coming months and for more information when EA releases its annual report this Spring. 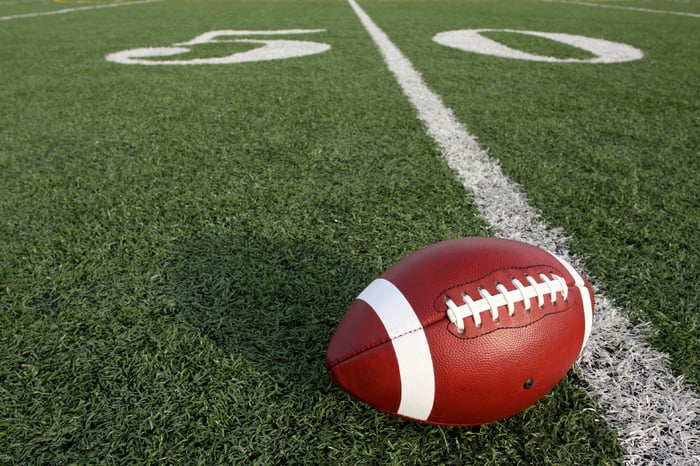 The big hiccup with college games, and the likely reason why EA stopped the franchise in 2014, were legal concerns about paying college athletes and using their image and likeness. Unlike Madden NFL or other professional sports video games, EA Sports College Football did not have real-life players and coaches in the game because of complications with the NCAA, which did not allow athletes to make money from their personal brands at the time (although that rule has since been changed).

According to EA's press release, the first new version of EA Sports College Football will not have student-athlete names, image, or likeness, but investors should look for real players to be added at some point over the next few years. It adds more authentication to the game and should keep gamers engaged for longer. EA mentioned that it is "continuing to watch those developments closely" in reference to getting real athletes into the game. While vague, this shows that the company wants to move in that direction at some point.

Why it is a big deal

NCAA Football never got as big as FIFA or Madden, EA's flagship sports titles, but it has a hardcore fanbase. People still play the 2014 title even though it is seven years old, with copies selling for $100 or more on the secondary market in 2020. CEO Andrew Wilson didn't give specific guidance, but on a recent conference call he said that the franchise sold "tens of millions of units over its life" and that he gets emails weekly requesting the company bring the franchise back. The announcement also got 146,000 retweets, another example of the excitement for the return of this franchise. If this fervor can turn into unit sales, the franchise could add hundreds of millions in revenue for EA each year.

To understand how much a college football game could impact EA's financials, let's do some quick math. If EA sells 10 million titles at an average price point of $60 (the standard in the video game industry), that is $600 million in new bookings for EA each year. For reference, over the last 12 months, EA's net bookings were around $6 billion, which means that if the EA Sports College Football franchise is a success, it will have a material impact on the company's business.

Electronic Arts just reported solid third-quarter earnings with record cash flow generation and bookings. However, what investors should be most excited about is the return of its college football video game and what it can do for the company's future financials. A new college football game will help EA dominate the sports video game category for years to come.