Please ensure Javascript is enabled for purposes of website accessibility
Log In Help Join The Motley Fool
Free Article Join Over 1 Million Premium Members And Get More In-Depth Stock Guidance and Research
By Keith Noonan - Updated Feb 8, 2021 at 8:28AM

Shares of iRhythm Technologies (IRTC -0.01%) sank 29% in January, according to data from S&P Global Market Intelligence. The healthcare technologies stock plummeted following a report that Novitas Solutions, a Medicare Administrative Contractor (MAC), was showing reimbursement rates for the company's products that were much lower than previous levels. 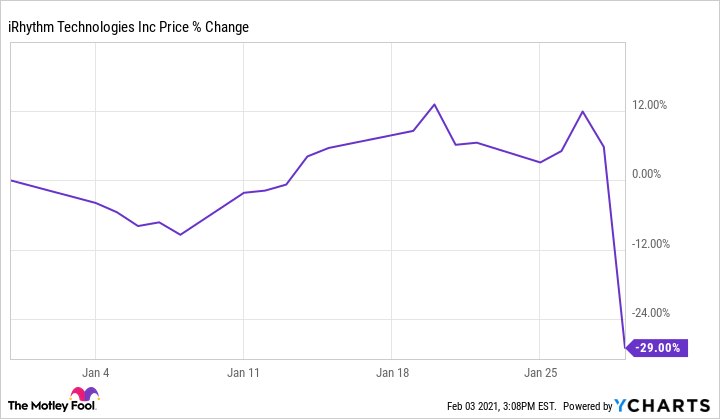 The stock skyrocketed 248% across 2020, and is still up 107.5% over the last year. However, recent sell-offs reflect concerns that pricing power for the tech will be weaker than previously anticipated. 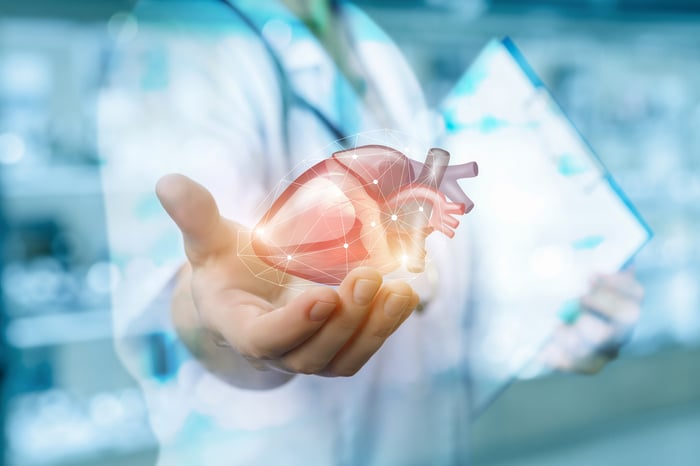 Patients can wear iRhythm's biosensors to help detect heart arrhythmia, and investors poured into the company's stock in 2020 following strong business momentum and the promise of a large addressable market.

The stock then posted substantial losses at the start of December following news from the Centers for Medicare and Medicaid Services that its 2021 Medicare Physician Fee Schedule Final Rule did not support some of iRhythm's pricing goals. But its shares still closed out the year with huge gains.

A report from Baird analyst Mike Polark published on Jan. 29 compounded the pricing concerns, and shares have continued to pull back. Polark's note stating that the reimbursement rates Novitas was posting for iRhythm's products looked significantly lower than expected prompted a big sell-off for the stock.

The subsequent drop for the stock caused trading to be temporarily halted. It was quickly resumed, but some analysts then published bearish or otherwise cautious coverage on the stock, and the sell-off continued.

iRhythm shares have continued to dip early in February. The company's stock is down roughly 1.4% in the month so far. 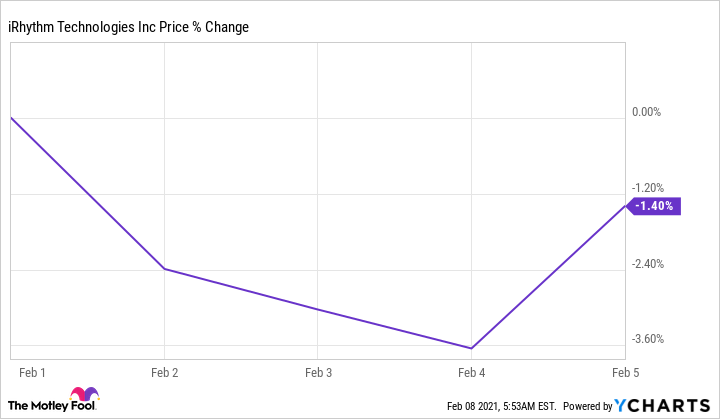 iRhythm has a market capitalization of roughly $5.2 billion and trades at approximately 15 times this year's expected sales.

The company's Zio XT biosensor patches enable remote cardiac monitoring and are helping some healthcare providers address urgent needs. But iRhythm isn't the only player in the space, and recent sell-offs on the heels of pricing-strength concerns reflect that the stock continues to be a high-risk, high-reward play in the medical technologies space, and its outlook is speculative.