Please ensure Javascript is enabled for purposes of website accessibility
Log In Help Join The Motley Fool
Free Article Join Over 1 Million Premium Members And Get More In-Depth Stock Guidance and Research
By Jason Hawthorne - Feb 9, 2021 at 6:40AM

The unusual biotech could be a bitter pill for short sellers to swallow.

It's not often a textbook short squeeze creates a classic bubble. A stock with significant bets against it starts rising, forcing those who are short to "cover," or buy shares themselves. The rising price attracts more and more attention until a frenzy of buyers bid the stock up to irrational levels, focusing on how high the price might climb instead of what it might be worth. Over the past few weeks, shares of Gamestop -- albeit for a moment -- seemed to rewrite the rules on Wall Street. As that story lost steam, another heavily shorted stock, Ligand Pharmaceuticals (LGND 0.17%), might just be the next to rocket higher. 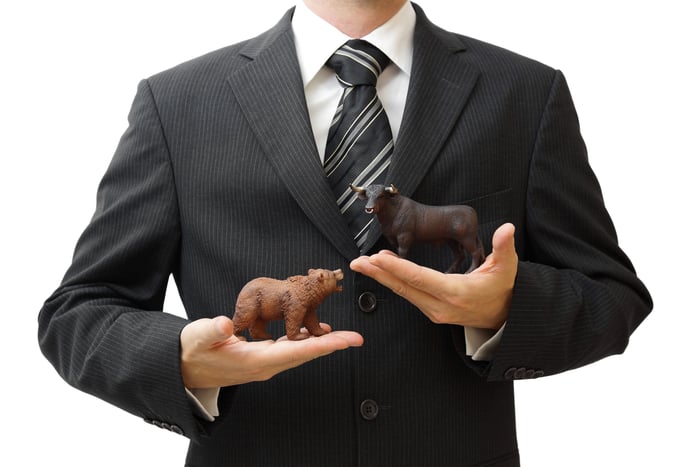 The case for being long

Ligand has an unusual model for the pharmaceutical industry. It holds patents on technology that other drug companies use to make their products. Some of the largest pharmaceutical companies in the world use its three platforms, OmniAb, a modified cyclodextrin called Captisol, and Pfenex, to develop their own treatments across virtually all disease categories. Perhaps the uniqueness is the reason 62% of outstanding shares, and 108% of the publicly available shares, are currently sold short.

OmniAb is the company's platform for producing human-like antibodies in animals. Ligand has participated in 44 active or completed trials using the technology to produce an OmniMouse, OmniRat, or OmniChicken. The heart of the program is the artificial intelligence that models the animal systems to produce high-quality fully human antibodies in the animals. Management expects the first approvals using the approach to happen this year, and believes up to ten approvals are possible by 2025. The pipeline continues to fill. New programs were initiated by Johnson & Johnson (JNJ 1.10%) and Merck (MRK 1.58%) in the fourth quarter.

Captisol is a cyclodextrin, a molecule designed to make drugs more soluble and stable, and has more than 400 patents worldwide being used by more than 40 different companies. It generated $110 million in 2020 revenue, nearly 250% more than 2019. The gains were largely the result of its partnership with Gilead Sciences, which uses Captisol for the antiviral Veklury (also known as remdesivir).

Ligand acquired Pfenex in October for its protein production technology. The platform's versatility to create engineered non-natural proteins, antibody derivatives, peptides, and enzymes can reduce the time and cost for biopharmaceutical companies to develop treatments. In short, it makes manufacturing complex drugs possible. Both Merck and Jazz Pharmaceuticals have submitted applications in the U.S. and Europe using the technology. Management expects the collaborations using Pfenex's technology to meaningfully contribute to future royalty revenue.

The case for being short

The negativity started at the beginning of 2019, when short seller Citron Research, the same one that was crushed after publishing its short thesis on Gamestop, raised questions about Ligand's royalty projections. It likened the circumstances to Valeant Pharmaceuticals, a stock that fell 90% after Citron's damning exposé.

When the Citron report came out, Ligand shares were already down more than 50%, about twice a simultaneous sell-off in the entire biotech sector. Management reacted by selling Promacta, its largest revenue stream, to Novartis, and using much of the cash to buy back shares. That left Captisol as the primary driver of sales. For the full year 2020, the $110 million in Captisol sales made up nearly 60% of the company's $186.4 million in revenue. Wall Street may think it's hard to estimate how recurring that revenue will be.

In its annual filing, Ligand lists the ability of partners to terminate agreements for Captisol at will, as well as the fact that the company procures it from a sole supplier, in the risk factors. There are plenty who would be glad to take the business. Competitors include Johnson & Johnson subsidiary Janssen and Wacker, which claims to be the only producer of all three naturally occurring cyclodextrins. Despite the risks, Ligand does have patent protection on Captisol, and even lists Janssen among its 120 pharmaceutical and biotech partners.

Ligand's broad exposure across the industry to different companies and technologies gives it the diversification of a fund, yet the company has shrewdly bought and sold assets to deliver profits for shareholders. Captisol comes from the 2011 acquisition of Cydex Pharmaceuticals for about $36 million. In 2015, management acquired OmniAb in a $175 million deal for privately held OMT. 2020 saw the company spend $516 million to bring in Pfenex's protein expression platform.

The company has also had good timing. The sale of Promacta in 2019 gave the company $827 million in cash. Management used more than half of the windfall to buy back stock. In the 12 months between November 2018 and 2019, the company bought back about 18% of the outstanding shares, spending roughly $118 per share. The board even authorized additional buybacks once an initial authorization was exhausted. The shares sit at about $200 each today. Yet, despite that deft capital allocation and potential for growing royalties, the stock has heavy bets against it. When the fundamental strength of the business is realized and the stock starts rising, shares of Ligand might take off in the same way as Gamestop's did.