Please ensure Javascript is enabled for purposes of website accessibility
Log In Help Join The Motley Fool
Free Article Join Over 1 Million Premium Members And Get More In-Depth Stock Guidance and Research
By Lawrence Rothman, CFA - Feb 10, 2021 at 10:00AM

Which stock will deliver a better return?

Although Domino's Pizza (DPZ 2.31%) and DoorDash (DASH 5.15%) saw higher demand due to increased deliveries, they are very different companies. Domino's was founded more than six decades ago with the premise of delivering inexpensive pizza. Meanwhile, DoorDash was developed by entrepreneurs in 2013 to provide restaurants with delivery services.

Does the established company or the newcomer offer better prospects? 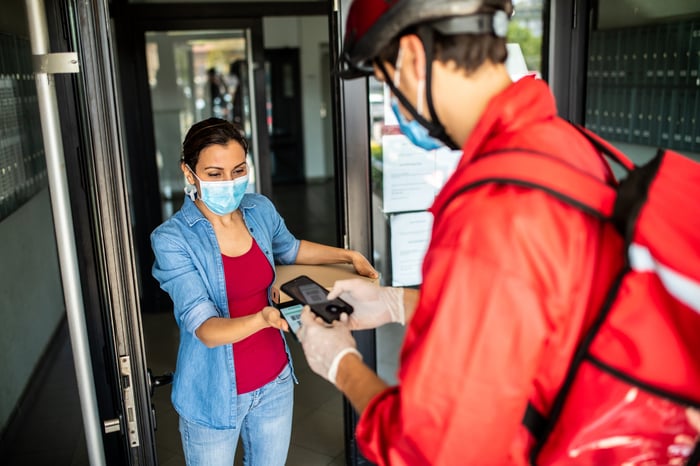 Although it started as a pizza chain, Domino's menu now includes chicken, bread, pasta, salads, and desserts. In this competitive space, which includes small pizzerias and national chains like Papa John's, it generates the largest sales in the world via company-owned and franchised restaurants.

The pandemic certainly helped last year's sales with people staying home and ordering inexpensive food. Its fiscal third-quarter same-store sales (comps) rose by 14.8% after excluding foreign currency translations. Its U.S. comps were 17.5% while international comps were 6.2% higher. Earnings were $2.49 a diluted share, a 21.5% increase versus a year ago.

But it is not merely a temporary boost from the pandemic that is propelling sales. Domino's U.S. comps have risen for 38 straight quarters, and it has a 107-quarter streak at its international operations.

Management sees expansion opportunities, opening 728 restaurants over the last year, with 65% of the total coming from new international locations. At the end of the third quarter, Domino's had over 17,250 restaurants. Opening more locations is a logical step for growth.

Since initiating regular quarterly dividends in 2013, Domino's has raised the payment annually. This includes last March's 20% hike to $0.78.

DoorDash's stock quickly became a hot IPO after going public at $102 last month, with the price up by nearly 80%. The company claims it has a 50% market share, connecting 390,000 merchants with over 18 million consumers. It says its core mission is to help businesses, particularly smaller ones, reach new customers.

Even before the pandemic, DoorDash was rapidly growing revenue. In 2019, it was $885 million, three times the prior year's $291 million. However, its loss dramatically widened from $204 million to $667 million.

Unfortunately, while 2019's top line skyrocketed for the first nine months to $1.9 billion versus $587 million, the company continued to lose money. DoorDash lost $149 million, albeit narrower than last year's $533 million.

DoorDash's high revenue growth rate and market share notwithstanding, it still faces stiff competition. Uber Technologies' Uber Eats commands 26% of the market, and it acquired Postmates late last year, which had a 7% share, creating a powerful combination. Grubhub is no slouch either, accounting for a 16% slice.

Aside from these competitive pressures, DoorDash is also confronting other challenges this year.

Although Domino's has been around a long time, its focus on fast delivery, tinkering with the menu, and affordable prices make it relevant. That's why it is able to produce consistently improving results. DoorDash is in a fast-growing industry, but it still faces formidable competition, and it hasn't shown it can make a profit.

This makes Domino's the clear winner.