Please ensure Javascript is enabled for purposes of website accessibility
Log In Help Join The Motley Fool
Free Article Join Over 1 Million Premium Members And Get More In-Depth Stock Guidance and Research
By Alex Carchidi - Feb 10, 2021 at 7:05AM

If people need Xanax in the future -- and they definitely will -- they'll need Viatris to make it.

If you've ever breathed a sigh of relief at the pharmacy register because your generic medication was cheaper than the brand-name version, you've experienced the economic power of pharmaceutical manufacturers. By undercutting the branded competition, big manufacturers save you money -- while getting rich in the process.

That's why Viatris (VTRS -0.86%) is a stock that might be right for your portfolio, especially if you're looking for a long-term and slow-burn investment that's currently selling at a bargain. On the other hand, the company still has a lot to prove, as it's been around for less than a year. Is Viatris about to be a rising star in healthcare, or will it struggle to win against entrenched competition? 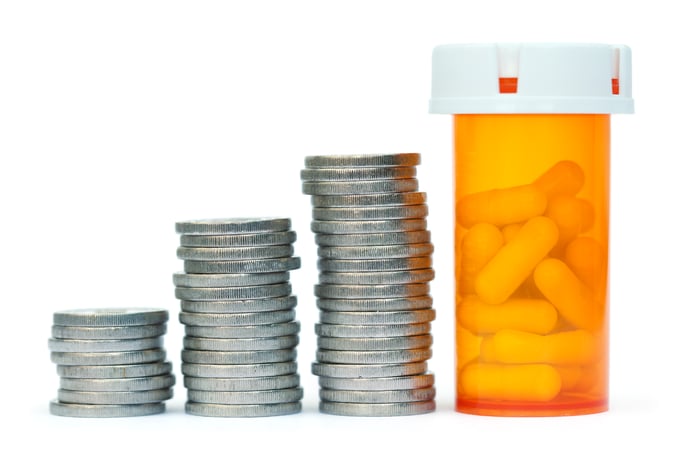 If you haven't heard of Viatris, you've probably heard of its predecessors, Mylan and Upjohn. In late 2020, the drug manufacturer Mylan merged with Upjohn, which at the time was Pfizer's manufacturing business. So, it's a relatively new entity, but it comes from two large companies that competed for years in the industry. In other words, its management and operational staff are deeply experienced, even if they're just now working on the same team for the first time. Notably, one of Upjohn's senior executives is now the CEO, whereas one of Mylan's has taken the role of president.

Its portfolio of products includes generics, biosimilars, and ubiquitous branded drugs like Zoloft, Xanax, and Viagra. As a rule, these brands have massive patient populations. Zoloft could potentially serve up to 300 million people with depression worldwide, though it does face considerable competition from other antidepressants. Several of Viatris' products, like Lyrica, are facing strong competition from generics, thereby eroding its market share. That may be one reason why Pfizer was interested in spinning off Upjohn in the first place, as a new and dedicated manufacturing entity could find a way to effectively compete. The company will need to be excellent at producing drugs at scale (and for profit) if it is going to succeed.

The good news is that Viatris' cash flow could be as predictable as the demand for its products. With smooth cash flows, it'll be able to reward shareholders a tremendous amount over the long-term. On that note, shareholders can expect the stock to pay a dividend in the future. Management says that the dividend will be equal to at least 25% of free cash flow. The company may also use some of its cash for share buybacks, which would pump up the stock's total shareholder return even higher.

While it's in no danger of insolvency anytime soon, Viatris does have $12.51 billion in debt, and management is making de-leveraging a priority alongside shareholder returns. There's a chance that it won't have enough cash to pursue both goals equally, which might frustrate shareholders.

Furthermore, in December it announced that it was closing 15 manufacturing facilities, which could impact up to 20% of its global workforce. Though these facilities may not have been profitable for the company to operate, the closures mean that future capacity expansion will be more expensive.

It'll take some time to realize the merger's expected $1 billion in cost synergies through 2024. This means that investors may need to wait longer than they'd prefer before there's enough money for sustainably raising the dividend or buying back shares.

Why it's best to wait

I don't think that now is the right time to buy this stock for one simple reason: there isn't enough data on its performance.

There hasn't been enough time since the merger between Mylan and Upjohn for Viatris to report any earnings. You can look at the pre-merger data from Mylan or Upjohn separately, but it won't give you an idea about how the new entity is working out the kinks.

The first big update for shareholders will be on March 1, its first annual investor day. While you might get a small discount on shares by buying them ahead of time, it's probably better to hold off until the company demonstrates that the expected activities post-merger are going as planned.

Pay particular attention to management's updates regarding the expected cost savings and revenue synergies from the merger. And, if you're risk averse, it might even make sense to wait for a few more earnings reports so that you can invest more confidently.

Why Viatris Stock Is Popping Today

Is Viatris Stock in Trouble?

Why Viatris Stock Dropped 24% in February