The company is doubling down on internet-based video and could be the best way to play the streaming TV frenzy.

The merger of The Rubicon Project and Telaria last summer into what is now Magnite (MGNI 5.33%) has been a boon for shareholders. The sell-side advertising platform's share prices have been off to the races (up more than 700% over the last six months alone) as the streaming-TV movement reaches a frenzy. Old linear TV services are quickly migrating to the modern standard, and Magnite's connected-TV (CTV) segment is having a heyday as a result.

Riding high on this strength, Magnite went shopping and recently announced it's acquiring SpotX from European media conglomerate RTL Group for $1.17 billion. Now that's how you use surging stock price strength to your advantage.

Magnite will be paying for SpotX with $560 million in cash (some cash from its balance sheet, which totaled $104 million at the end of Q3 2020 and the rest via financing provided by Goldman Sachs) and 14 million shares of Magnite. At the time of the announcement, it valued SpotX at $1.17 billion, although the 14 million in new stock is worth more than it was prior to the deal's reveal. As of this writing, Magnite shares were up some 35% since the news was released, boosting the company's total market cap to $7.1 billion. Nevertheless, using its skyrocketing stock as a type of currency will help the company manage its balance sheet, all the while yielding it a new asset. 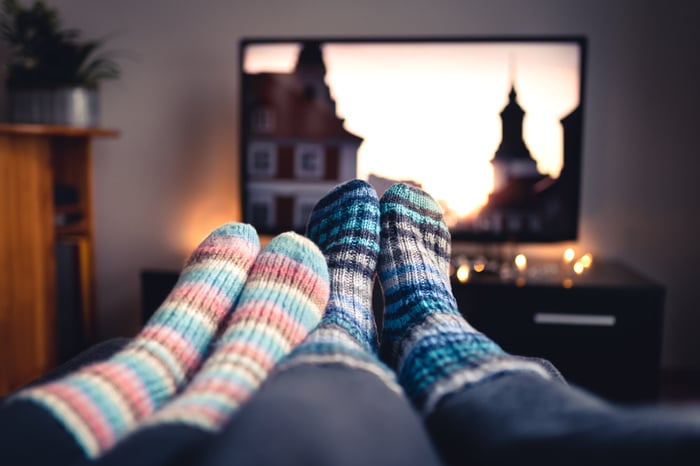 What exactly is Magnite getting out of this purchase? SpotX's preliminary 2020 revenue was $116 million, $67 million of which was CTV-based sales. As SpotX's profit profile hasn't been revealed, total consideration at the time of the announcement was about 10 times SpotX's 2020 sales -- roughly in line with Magnite's trailing-12-month price-to-sales valuation back in December. Notably, the inclusion of SpotX with Magnite's 2020 preliminary results would make Magnite the world's largest independent CTV advertising platform, with two-thirds of the combined companies' sales coming from CTV and video during Q4.

This is significant because CTV has been Magnite's fastest-growing segment as of late. Magnite said its total revenue increased 20% year over year in Q4 2020 (when compared to The Rubicon Project and Telaria premerger), but the CTV segment specifically grew 54% from a year ago to $15.3 million (representing just shy of 19% of total revenue during the final months of the year). SpotX thus represents a doubling down on Magnite's most promising business. Thank the myriad of streaming services that have launched recently, many of which are Magnite and SpotX customers: Disney's  Hulu, AT&T's WarnerMedia, Discovery, fuboTV, Roku, ViacomCBS, and Comcast's Vudu, among others.

Clearly, this new acquisition will play a key role in the fast-developing streaming TV landscape.

Content creators are figuring out how to migrate audiences over to internet-based streaming services, and adding subscribers is the name of the game right now. But figuring out how to profit off of content creation in this new streaming era will be a multiyear process. Magnite and SpotX's software will be a top partner for these content companies as they look for advertisers to connect with. (The Trade Desk is the largest independent buy-side ad platform and is often a counterparty to Magnite's sell-side platform.)

Given the long runway ahead for this new entertainment industry standard, I'm still bullish on Magnite stock. Don't let the massive triple-digit percentage run-up in recent months deter you -- not if you have an eye on the potential at least a few years from now (the longer the better; I'm looking a decade down the road). Magnite said total 2020 sales (including SpotX results) were $350 million, which means it currently trades for roughly 19 times sales. For a growing tech business -- especially one that could accelerate its expansion given the recent deal and lapping of initial pandemic effects from a year ago -- it isn't an unreasonable price tag.

There will be risk, though. At least as of its third-quarter 2020 report, Magnite still wasn't profitable (although it was profitable on an adjusted EBITDA basis). Purchasing SpotX will also leave it with debt where it previously was debt free. I expect share prices to be highly volatile, as they usually are for small high-growth companies.

But I'll just reiterate that the valuation isn't unreasonable -- again, assuming an investor plans to buy and hold (and perhaps buy more on the inevitable dips) for the long term. CTV is going to be a massive industry, and lots of very large names in entertainment and media will be figuring out how to profit. Magnite is quickly positioning itself as a top-of-mind solution in this department.