Please ensure Javascript is enabled for purposes of website accessibility
Log In Help Join The Motley Fool
Free Article Join Over 1 Million Premium Members And Get More In-Depth Stock Guidance and Research
By Zhiyuan Sun - Feb 11, 2021 at 6:35AM

This Canadian marijuana grower is getting ready for an ambitious turnaround. Can it make investors rich again?

Canopy Growth (CGC -5.09%) is almost back to all-time highs after a monstrous rally of 158% over the past year. In fact, if you had invested just $10,000 in its Canadian listing in 2015, that investment would have grown to well over $300,000. At this rate, investors may be wondering whether or not the stock could turn their holdings into seven figures down the line.

As it turns out, the hype is far from irrational exuberance. Today, let's look at why investors should be genuinely excited about what Canopy Growth has to offer. 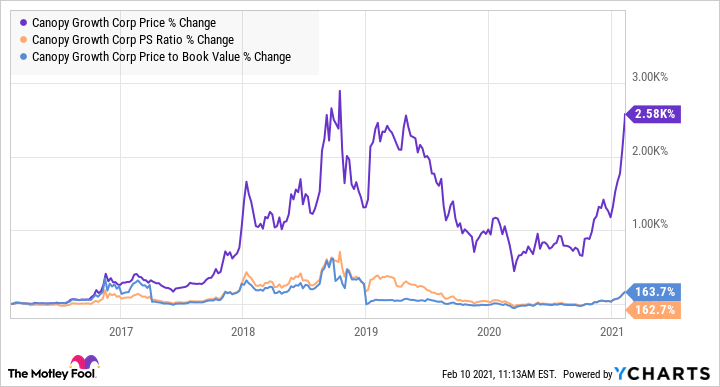 Not just any weed giant

During the third quarter of 2021 (ended Dec. 31), Canopy Growth's revenue increased by 23% year over year to 152.5 million Canadian dollars. Simultaneously, its operating income less non-cash expenses (EBITDA) improved by 29% to negative CA$68.4 million. The company's free cash flow burn decreased the most, by 62% over last year's quarter to CA$135.4 million. Canopy Growth is engaging in a series of aggressive facility closures to better align itself with consumer demand in Canada. It already recognized over CA$506 million in writedowns, restructuring, and asset impairments in Q3 2021 alone. However, the company expects that these efforts will result in CA$150 million to CA$200 million in savings over the next 12 to 18 months.

The pot grower projects that it can grow its revenue by between 40% and 50% per year for the next two years. On top of that, it set a goal of achieving positive EBITDA by fiscal 2022 and a 20% EBITDA margin by fiscal 2024. In terms of profitability, the earliest Canopy Growth thinks it can break even is fiscal 2023 (in terms of operating cash flow) and fiscal 2024 (in terms of free cash flow).

What's more, Canopy Growth has regained its leading position in Canada. Its sales volume accounts for 15.7% of the country's legal pot market, which puts it within reach of the No. 1 spot in terms of market share. Recently, Canopy also managed to climb to among the top two in the wholesale medical marijuana market in Germany. While it is trying to plan the expansion of its line of cannabis-infused beverages into the U.S., that has not taken off, as it would require the legalization of consumption lounges or removal of individual purchase limits to achieve any real momentum.

The real potential for Canopy Growth lies in its expansion into the U.S. tetrahydrocannabinol (THC) market. THC is the main psychoactive cannabinoid found in cannabis. In the U.S., substances with over 0.3% THC are still illegal under federal law. But since Democrats gained control of the House, Senate, and Oval Office, the U.S. looks to have a better shot at seeing either decriminalization or legalization of marijuana under the Biden administration. Canopy Growth is hoping that this dream becomes a reality. Back in 2019, Canopy announced it would acquire U.S. cannabis operator Acreage Holdings (ACRGF) in a $3.4 billion deal -- contingent on the federal legalization of cannabis.

Acreage operates 28 dispensaries in 15 states and has 71 dispensary licenses in total. In Q3 2020, its revenue grew 42% year over year to $31.7 million. The company has a net loss per quarter of roughly $35 million, which remains largely unchanged from a year ago.

Canopy Growth is by no means cheap -- it is trading at a whopping 50 times revenue and five times net assets. It is important to note, however, that it has CA$1.6 billion in cash and equivalents on hand compared to just CA$617 million in long-term debt. In other words, much of the company's assets remain uninvested in pot growing.

With the pot grower making a massive comeback in the Canadian marijuana industry and a $19.8 billion market expansion opportunity looming south of the border, I think Canopy Growth has just what it takes to live up to its hype. In the next five years, I would not be surprised if the marijuana company turned its shareholders into millionaires off even a small initial investment.