The buyer says that financing the deal won't put its hallowed dividend in jeopardy.

Mr. Peanut is on the move.

Kraft Heinz (KHC 2.05%) announced Thursday that it is selling most of the products sold under the well-established Planters nuts brand to food industry peer Hormel (HRL 0.43%) for $3.35 billion in cash. The latter company pointed out that the effective price is actually around $2.79 billion due to a tax benefit of around $560 million.

The acquisition bolsters Hormel's already-considerable portfolio of snack brands. The company owns Skippy peanut butter and the Justin's line of treats, among other assets in the segment. 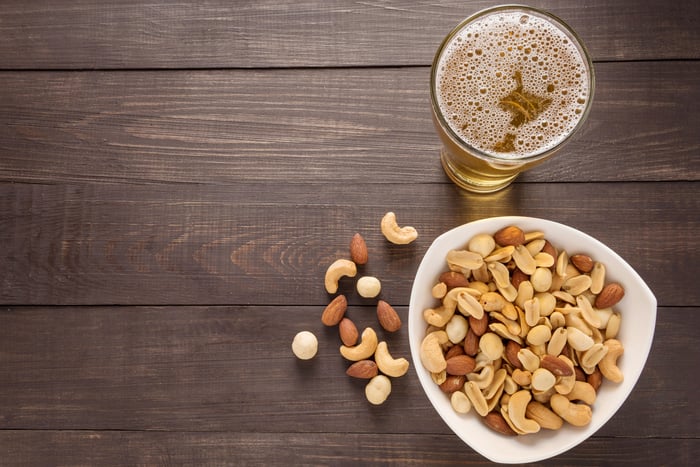 In its own press release on the Kraft Heinz deal, Hormel said that Planters' net sales in 2020 were roughly $1 billion. It said that owning the brand will "enhance" its overall profit margins and cash flow, although it did not provide further details.

Hormel did imply that the purchase was well within its financial means. "The acquisition of the Planters® branded business further demonstrates our disciplined financial approach to [mergers and acquisitions]," it quoted CFO Jim Sheehan as saying.

"We expect this acquisition will responsibly leverage our balance sheet and will not compromise our disciplined capital allocation policy, especially our commitment to dividend growth," he added.

A popular dividend stock, Hormel is in fact a Dividend Aristocrat -- one of the handful of S&P 500 index components that has raised its payout at least once annually for a minimum of 25 years in a row.

As for Kraft Heinz, unloading Planters "will enable us to sharpen our focus on areas with greater growth prospects and competitive advantage for our powerhouse brands," it quoted CEO Miguel Patricio as saying.

Both companies expect the transaction to close by the end of the second quarter. It is subject to approval from the relevant regulatory authorities.

Why This Works for Hormel but Not for ENI

2 Years Into the Pandemic, I'm Buying More of This Stock

Why I'm Overweighting My Position in Hormel