Please ensure Javascript is enabled for purposes of website accessibility
Log In Help Join The Motley Fool
Free Article Join Over 1 Million Premium Members And Get More In-Depth Stock Guidance and Research
By Alex Carchidi - Feb 12, 2021 at 7:07AM

If there were a "most improved" award, this stock might win it.

Would you want to invest in a stock that lost around 72% of its value since its market debut? Probably not, but hear me out. What if I told you that the same stock grew by more than 475% over the last three months?

Such is the case for the marijuana company Sundial Growers (SNDL 5.51%). Between its less-than-admirable performance since it went public in 2019 and its wild run-up in the last few months (driven by retail investor mania), it's easy to see how shareholders could get whiplash. So which way is Sundial going? To the moon, or back down to earth? 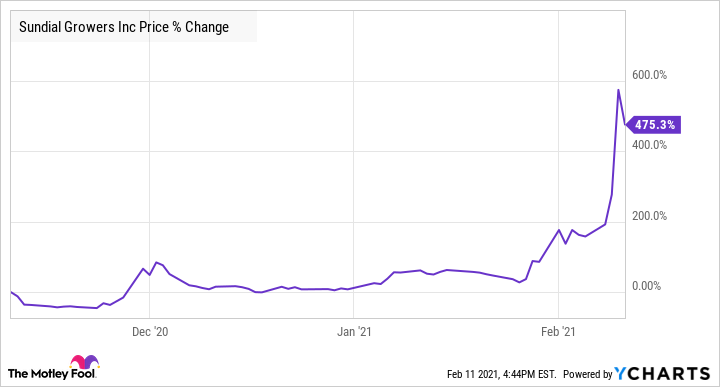 When it comes to potential growth stocks like Sundial, being the underdog can be good for shareholders. The company competes in Canada, where it held 3.3% of the adult-use market share as of its third quarter of 2020. That's hardly a commanding presence, but it does mean that there's plenty of room to impress investors by increasing market penetration over time. Sundial is still a young company, so steady reports of growth have the potential to do a lot for its valuation. Plus, since a financial restructuring in late December, it's debt-free, so any future free cash flow can be reinvested for growth.

Investors will be pleased to hear that management is working hard to improve the company's competitive position. First, its supply chain became significantly more effective in 2020. In March, around 21% of its shipments arrived at their destination on time and with customers' orders in full. By September, 96.1% of its orders were delivered on time and in full. That's a tremendous improvement in a few months, and hopefully the newly renovated supply chain will stay stable moving forward.

Management has also aggressively reduced overhead. In 2020 it shrank its corporate headcount by 58%, which suggests that it can make the tough choices needed to create a more sustainable operation. Harsh cuts like those led to a 69% drop in its quarterly cash used for operations between Q2 and Q3 of last year. Similarly, it reduced its cultivation costs per gram of cannabis by 12% in the same period. The company's gross margin is improving rapidly as a result. 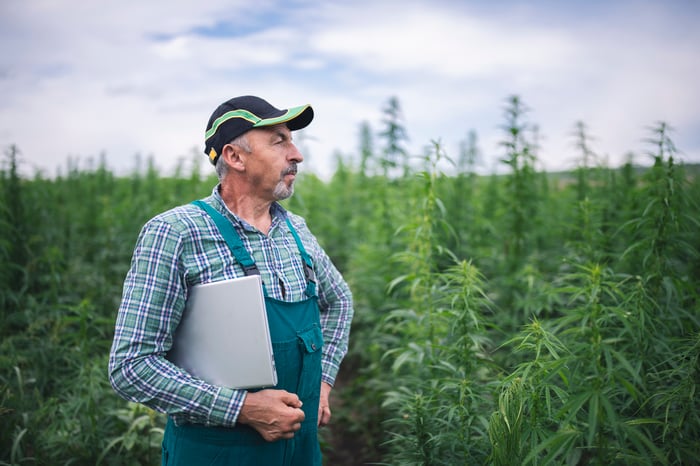 As compelling as Sundial's cost-cutting and supply delivering progress are, there are a few critical issues that Sundial needs to deal with before its stock is ripe for picking.

Revenue from sales of cannabis decreased by 36% in the third quarter -- that's not not great, to say the least. In the same period, sales and marketing expenses ballooned by 120%. With a rise like that, management may be angling for a quick turnaround with revenue growth, but investors should be cautious. If the company is still reporting shrinking revenue and increasing marketing expenses in its next earnings report, it'll be an unmistakable sign that things are on a dire path. Likewise, Sundial's earnings before interest, taxes, depreciation, and amortization (EBITDA) are still negative and heading in the wrong direction. That's another trend that will need to change before I consider buying.

Nonetheless, if you have a high tolerance for risk or a penchant for investing in turnaround plays, Sundial could be a good purchase. Its cash holdings of around $610 million mean that the company has plenty of fuel for expansion, not to mention a long runway to reach profitability. And its short-term price movements have been quite volatile, so the stock may continue to expand rapidly without any specific catalyst. Watch the next earnings report closely to see whether the increased marketing spending is paying off in the form of revenue growth, but don't be too surprised if progress takes several quarters to become apparent.