Please ensure Javascript is enabled for purposes of website accessibility
Log In Help Join The Motley Fool
Free Article Join Over 1 Million Premium Members And Get More In-Depth Stock Guidance and Research
By Sam Swenson, CFA, CPA - Feb 14, 2021 at 7:50AM

Be careful to avoid these common pitfalls if you've decided to join the FIRE movement.

The FIRE (Financial Independence, Retire Early) movement is, in my estimation, one of the best people-driven efforts to gain traction over the last decade. FIRE adherents reject the idea that they should sit helplessly in traffic to spend at least eight hours a day in an office for the next 30 years. Instead they find ways to earn, save, and invest as much of their income as soon as possible in an effort to become financially independent. The end goal is to have the financial ability to focus on the truly meaningful things in life and perhaps even retire early. Along the way, however, it's worthwhile to think about how this idea can go wrong.

1. Not knowing how you'll fill the time

Say your money needs are permanently covered. Have you really thought about how you will spend all your free time? If you became financially independent at age 40, you'll have, on average, another 350,000 hours to live. It's likely that most of your peers won't be on the same schedule, and you might find yourself isolated most of the time. This is most definitely not an argument to avoid financial independence, but it's definitely a good plan to really think about how you'll spend your time once you no longer have the need for full-time work. 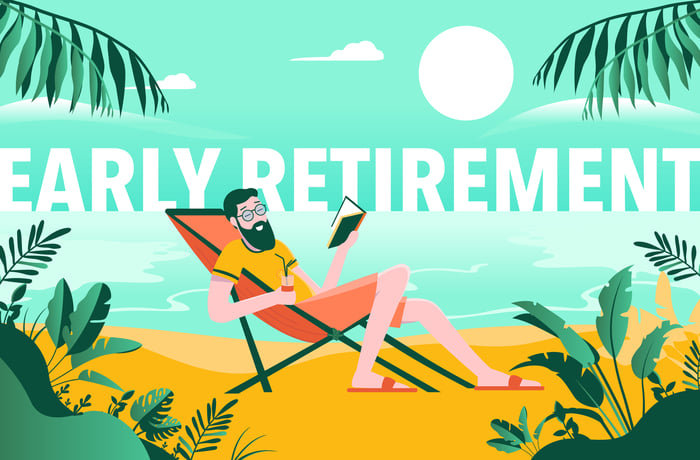 Current FIRE recommendations advise following the 4% rule: Once you've saved 25x your annual expenses, you are said to be financially independent. A nest egg of this size allows you to withdraw 4% of the beginning principal (annually and adjusted for inflation) with a minimal probability of ever running out of money. The 4% rule comes from a study conducted when bond yields were much higher than they are now, and there is also no guarantee that the equity returns of the future will mirror those of the past. A 2% or 3% rule might make more sense going forward, so you'll need to be sure that you've saved enough -- life can be unexpectedly expensive!

3. Not being on the same page as your spouse

Ideally you'll address this before the person becomes your spouse, but it's extremely important to be on the same page with your partner when it comes to money. If you see yourself wanting a work-optional, minimalist lifestyle while your spouse wants a big house, kids, and three cars in an expensive area, it's vital to find common ground in an open and honest way. While the idea of financial independence can appeal to almost everyone, the "retire early" piece can mean something different to almost everyone. Try to sketch out a plan and find areas of compromise.

If you've had a bad employment experience in the past, know that every work environment is different. If you find yourself hating the idea of traditional employment -- complete with a commute, long hours, and office politics -- you can still find ways to earn money that eliminate most of the unpleasantness. Being financially independent doesn't eliminate work as an option, but it does allow you to find work that suits your interests and lifestyle. Plus, having extra money coming in the door simply serves to reduce your reliance on your hard-earned savings.

5. Going from accumulating to spending

Let's say you've become financially independent in your 40s or 50s and are considering early retirement. In order to get to this point, you've most likely had to save and invest diligently for a period of decades. There is a psychological barrier that arises when you go from relentlessly accumulating assets to spending them down. If you've saved more than you need, it will be easier to do this. Still, know that the lack of a paycheck can be jarring if you've gotten used to having one for many years, which is another reason financial independence doesn't need to mean permanent retirement.

Anything that helps people become more cognizant of how they spend their valuable time is, in my view, a benefit to society. In the words of early FIRE adopter Vicki Robin, financial independence allows you to become "sovereign." You no longer need to depend on some external provider to live: This is a concept most people can understand and get behind. But be sure to know where and how your plan might go wrong so you can anticipate and prepare.