Please ensure Javascript is enabled for purposes of website accessibility
Log In Help Join The Motley Fool
Free Article Join Over 1 Million Premium Members And Get More In-Depth Stock Guidance and Research
By Adria Cimino - Feb 16, 2021 at 8:15AM

The pandemic hurt both of these companies. But one is recovering faster and is a better bet.

Beyond Meat (BYND -2.46%) and Starbucks (SBUX 3.87%) aren't exactly strangers to each other. Starbucks is serving up Beyond Meat's plant-based protein in its cafes from the U.K., to the Middle East, and to China.

There's also another element that links these two consumer companies -- their performance during the coronavirus pandemic. With restaurants closing down globally for a major part of 2020 due to lockdown restrictions, sales at both companies suffered. This meant actual closures for many Starbucks cafes and fewer orders from foodservice customers for Beyond Meat. Still, shares at both companies appreciated in 2020 with Beyond Meat stock managing to climb 65% and Starbucks stock gaining about 22%. Looking ahead, which of these two companies will recover more quickly, and which is the best buy right now? Let's take a look at each. 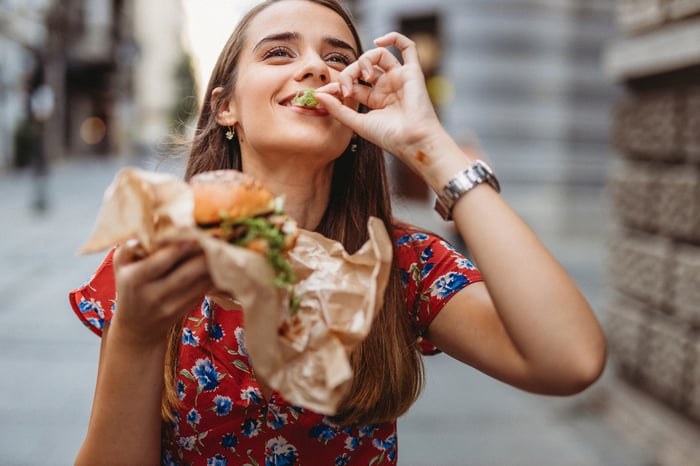 The plant-based protein giant's third quarter ended Sept. 26. At that point, fewer stay-at-home orders were in place, and most businesses had reopened both in the U.S. and internationally. Still, Beyond Meat, known for triple-digit revenue gains prior to the pandemic, reported a 2.7% year-over-year increase this time.

Though restaurants had reopened, demand was lower than usual -- and that meant fewer orders for Beyond Meat's products. Sales to retail outlets rose, but not as much as in the previous quarter when customers rushed to stock up on products. The effects of consumer stockpiling should start to wane as people have now had many months to use up products in their freezers. So it will be important to see whether retail sales progress. Last year, the company suspended its full-year outlook due to uncertainty linked to the pandemic. Beyond Meat is likely to report fourth-quarter earnings later this month.

Beyond Meat is in a growth market. The plant-based protein market, at a compound annual growth rate of 7.2%, is expected to reach $15.6 billion by 2026, according to a Markets and Markets report. But competitors have multiplied -- from big food players like Tyson (TSN 2.19%) to private companies such as Impossible Foods. Considering this, my biggest concern is pricing power and margins over the long term.

Starbucks said late last month that its China business has recovered and the U.S. business will recover by the end of the current quarter. This is key because those two countries are Starbucks' biggest markets. In the fiscal first quarter ended Dec. 27, U.S. same-store sales fell 5%. That's an improvement over the 9% decline in the previous quarter.

The coffee shop giant sees the move to on-the-go and digital as lasting -- not a trend that will end with the pandemic. So it's adjusted accordingly with a focus on contactless experiences. And it's seeing results. Starbucks reported improvements in drive-thru order delivery times, and U.S. stores with drive-thrus accounted for more than half of net sales in the quarter. Mobile orders represented about 25% of orders.

Another key sign of recovery is growth in 90-day active Starbucks Rewards program members. That member base rose to a record 21.8 million, up 15% year over year. And these members are contributing even more to revenue than prior to the pandemic. Their orders accounted for 50% of U.S. sales, up from 43% in the prior-year period.

COVID-19 dealt blows to both companies. But I'm particularly worried about Beyond Meat. I'm not convinced the company will be able to return to triple-digit revenue growth after losing momentum. And this is the perfect opportunity for Impossible Foods and other rivals to gain market share.

A look at quarterly revenue, gross profit margin, and net income paints a more favorable picture for Starbucks over the past year. 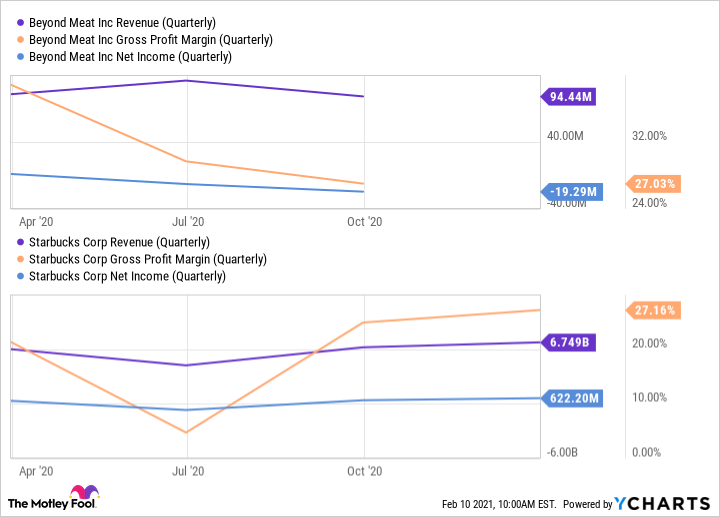 It's worth keeping Beyond Meat on your watch list and examining the upcoming earnings report. But Starbucks has offered clear evidence of recovery and a plan to navigate the future. And that's why it's the stock I would choose right now.