Please ensure Javascript is enabled for purposes of website accessibility
Log In Help Join The Motley Fool
Free Article Join Over 1 Million Premium Members And Get More In-Depth Stock Guidance and Research
By Katie Brockman - Feb 18, 2021 at 9:00AM

Here's how investing like a woman could affect your investments.

When it comes to finances, men and women have their differences. Women, on average, are paid less than men, and they also reach their peak earning age earlier in life.

These differences spill into the investing world, too. Men and women often have different investing strategies, and women tend to be less confident in their skills. In fact, only 9% of women say they believe they make better investing decisions than men, according to a survey from Fidelity.

Whether you're an experienced investor or just getting started, there are a few reasons not to invest like a woman -- but they may not be the reasons you think. 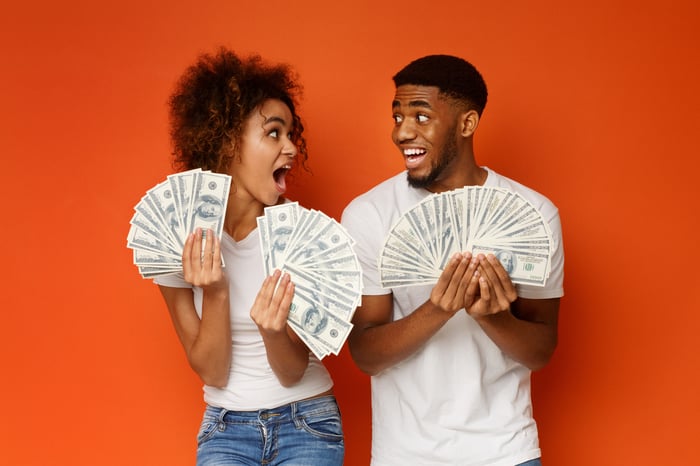 Despite an occasional lack of confidence, women can be fantastic investors. On average, women see higher investment returns than men. According to research from the University of California, female investors generated returns that were around 1% higher than male investors.

2. You enjoy losing more in your stock portfolio

Everyone will see their investments lose value at some point. Whether you invest in a stock that ultimately flops or your portfolio is hit hard by a market crash, it's normal to experience declines now and then.

However, on average, women tend to lose less in their stock portfolios than men. In 2015 (a particularly rough year for the stock market), female investors experienced losses of around 2.5%, according to data from investing platform Openfolio. Male investors, on the other hand, lost an average of 3.8%.

Although women are often paid less and experience much lower lifetime earnings than men, they tend to be better at saving. Women save, on average, around 9% of their paychecks, compared with 8.6% saved by men, according to a survey from Fidelity.

In addition, data from Vanguard shows that across all income levels, women are more likely than men to contribute to their retirement accounts.

4. You want to invest impulsively

Avoiding impulsive decisions is key to investing successfully.  The stock market is volatile at times, and if you panic-sell your investments at the wrong moment, you could lose a lot of money. For that reason, it's often best to hold your investments for as long as possible and avoid impulsive trades.

Women tend to trade less frequently than men, according to multiple studies, which has helped them generate higher returns. A study from Vanguard found that women trade 40% less frequently than men. Separate research from the University of California also found that men traded 45% more often than women between 1991 and 1997, which reduced men's returns by around 2.65% (compared to 1.72% for women).

The secrets to success

Ultimately, anyone of any gender (or any group, really!) can be a successful investor -- but it's critical to invest strategically if you want to see substantial returns.

One of the best ways to be successful in the stock market is to invest for the long-term. Find investments that are likely to see consistent growth over time, and then hold onto them for the long run. Your investments may experience volatility from time to time, but you can ride out the storm by continuing to invest and not panic-selling.

If you're saving for retirement, consistency is key. Aim to save at least 10% to 15% of your income, and take advantage of your 401(k), if you have one. Even if you don't have much to save, contributing at least a little each month to your retirement account will go a long way.

Investing in the stock market can be tricky at times, but it's one of the most effective ways to generate wealth. By strategizing carefully, you can make as much money as possible.