Please ensure Javascript is enabled for purposes of website accessibility
Log In Help Join The Motley Fool
Free Article Join Over 1 Million Premium Members And Get More In-Depth Stock Guidance and Research
By Courtney Carlsen - Feb 20, 2021 at 11:31AM

The company's earnings have grown steadily over the years. However, with threats from regulation and competition, is this exchange operator a buy?

Intercontinental Exchange (ICE 2.86%) showed its strength in 2020. Its revenue and earnings were both helped by increased volatility in the markets, along with historically low interest rates that increased mortgage lending activity and benefited the company's new mortgage technology segment. This new segment -- which it has spent the past four years growing -- focuses on solving inefficiencies in the U.S. residential mortgage market.

However, the company faces potential regulatory threats to its data services business, as well as increasing competition from the new exchange on the block, Members Exchange. Here are a few things you should know before you plunge into ICE. 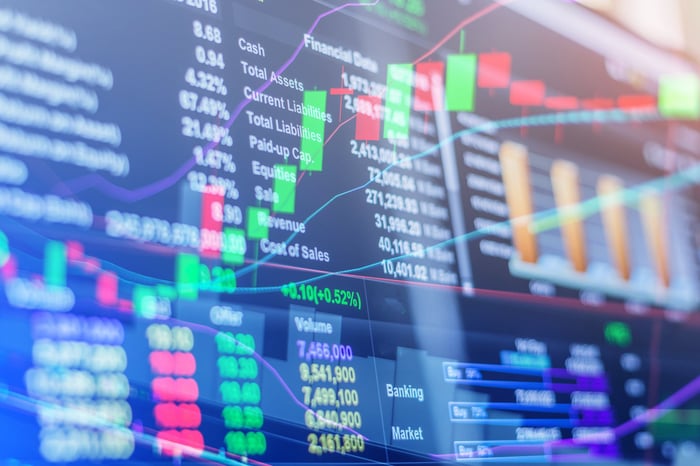 ICE has done a tremendous job of growing earnings at a consistent pace. Since 2006, the company has achieved a compound annual growth rate of 17% in adjusted earnings per share (EPS). Its total revenue and diluted EPS were both up 16% in 2020, showing its stellar earnings growth continuing.

ICE operates three different segments. One is its exchanges business, which includes the New York Stock Exchange (NYSE), Euronext, and the New York Board of Trade. This segment grew 10% on the year to $3.6 billion. Another is fixed income and data services, which rose a modest 3% to $450 million.

Management is most optimistic about the company's foray into the mortgage market. ICE's mortgage technology business, a new reporting segment, saw its revenue grow 324% from last year, up to $595 million in 2020. By the end of the year, this new segment already accounted for almost 10% of the company's total revenue, after accounting for only 3% in 2019. ICE ventured into the mortgage market with its acquisitions of MERS in 2018, Simplifile in 2019, and Ellie Mae, which was its big acquisition for 2020. Ellie Mae is a company that processes mortgage applications and offers services using the software-as-a-service (SaaS) model. ICE paid $11 billion for Ellie Mae and expects an internal rate of return of 10% on this investment.

Expanding into the mortgage market is certainly a good thing for ICE. However, the company faces uncertainty stemming from SEC regulations as well as increasing competition that could affect its data services and exchanges revenue streams.

Concerns about regulation and competition

In December 2020, the Securities and Exchange Commission (SEC) made a key ruling that will affect big exchanges like the NYSE and Nasdaq. These exchanges charge clients for access to private data -- which the SEC challenges, saying that the public deserves access to increased data, such as depth-of-book data and odd-lot quotations, among other things. The commission contends that its new rules modernize the equity market regulatory structure, and that the new rules increase competition and transparency while improving data quality and data access for all market participants.

The NYSE and Nasdaq have sued the SEC over these rules. The exchanges contend that the SEC "exceeded its authority" and its plan "would make equity market overly complex and increase hidden costs for investors." One of the biggest concerns for ICE would be the threats to its data revenue. According to an analysis by the Committee on Capital Markets Regulation, revenue that all exchanges earn from data services has increased 62% from 2014 to 2019, to $2.4 billion. For ICE, its Fixed Income and Data Services segment generated $1.8 billion in revenue in 2020, or 30% of its total revenue.

The worst news for ICE: The plan has the support of the Members Exchange (MEMX), a new rival backed by a stable of big names in finance, including Bank of America, Charles Schwab, Citadel Securities, Fidelity Investments, Morgan Stanley, and Virtu Financial. The exchange was approved by the SEC last May and launched in September, with the mission of delivering a lower-cost, more transparent exchange platform for its users.

The outcome of the SEC ruling isn't the only thing investors need to consider. One must also consider the threat MEMX could pose to ICE's future revenues. Because ICE's exchanges segment accounts for 60% of its total revenue, losing business to MEMX is a big potential threat, but only if the exchange draws enough meaningful volume from NYSE and Nasdaq.

ICE shareholders can take comfort in knowing that another would-be disruptor -- the Investors Exchange (IEX), which was featured in Michael Lewis's 2014 book Flash Boys: A Wall Street Revolt -- only garners around 2% of U.S. trading volume despite launching in 2016. However, the backing of MEMX by several big names in finance should give ICE investors some reason for concern.

A good company facing threats with a relatively high valuation

ICE's price to book value has climbed steadily since 2015 and is currently sitting near its five-year high. Its price-to-earnings (P/E) ratio is on the expensive side too, also around its recent highs. 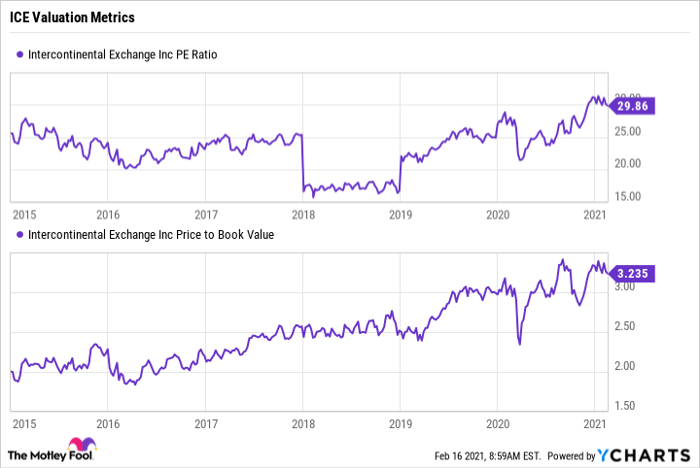 ICE has no doubt shown the ability to continually grow its earnings over decades. It has pounced on a great opportunity with its mortgage segment, especially with mortgage rates near historic lows. The pivot into mortgage may have come out of necessity, but it will surely continue to provide great growth opportunities. However, the competitive threat posed by MEMX, along with the SEC ruling over its data access and the threat to its data services revenues, are things I would weigh heavily. Ultimately, with the stock looking expensive relative to its history, the risks outweigh the rewards for the time being.