Please ensure Javascript is enabled for purposes of website accessibility
Log In Help Join The Motley Fool
Free Article Join Over 1 Million Premium Members And Get More In-Depth Stock Guidance and Research
By Courtney Carlsen - Updated Feb 22, 2021 at 11:01AM

Marqeta is a disruptive fintech bringing payments control into the digital age, and is looking to go public this spring.

A number of big private companies have gone public in the past couple years, with plenty more on the way soon. One that I don't think gets talked about enough is Marqeta.

Marqeta is the expert at issuing customizable credit cards that help clients reduce fraud. It has done a great job of finding valuable partners over the years, like Uber Technologies and DoorDash, and it is changing the payments game by bringing payments control into the digital age. This combination of vision and expertise has me the most optimistic about the company's growth prospects.

Marqeta issues customizable cards for big companies, and its payment control options have reduced fraud significantly. The company recently partnered with Goldman Sachs in building its Marcus checking accounts and has worked with younger disruptors like Square, Uber, and Instacart.

Marqeta has significantly reduced the amount of time it takes a company to bring these cards into existence. For example, when Square decided to issue a virtual debit card to work alongside its fast-growing money-transfer app, it looked to Marqeta to build its product. Marqeta turned it around in six weeks, significantly cutting down on the time it would have taken a traditional card issuer.

The strategy of partnering with private unicorns and public newcomers will certainly help Marqeta grow alongside them. 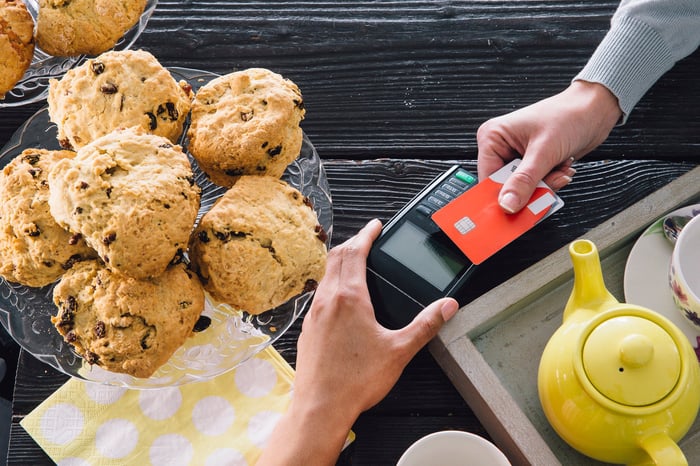 Marqeta's cards can be physical or virtual. They can be created in an instant for customizable payment, providing clients with added flexibility when it comes to managing payment methods. In addition, the company ensures clients are compliant with PCI regulations, or standards the require merchants to protect customers' financial information, and can perform just-in-time funding, where transactions are only authorized in real time at the point of transaction.

One other interesting feature of its cards is dynamic spend control. This reduces fraud and limits where users can transact, based on where they are, what time it is, and how much the transaction is for. For example, corporations issuing purchasing cards are naturally prone to fraud. By utilizing Marqeta, they can put rules in place to reduce the chances of fraudulent charges, such as only allowing payments at certain vendors or at certain locations.

Another example is DoorDash, which partnered with Marqeta to issue debit cards for its contractors. Because many restaurants require payments at the point of sale, DoorDash had to find a solution that would enable its workers to efficiently pay restaurants while minimizing fraud risk. While traditional cards could be programmed with simple controls like transaction minimums or daily minimum charges, they are still prone to fraud. So Marqeta worked with DoorDash to create the "Red Card", which "Dashers" could present at the restaurant to pick up customer orders. A key feature was its just-in-time funding, where the Red Card is only funded if the Dasher is at the correct restaurant and is picking up an order where the dollar amount is equal to the customer order amount. This control not only cut down on fraud, but it also reduces the chances of Dashers picking up incorrect orders.

Because of its customizability and control, fraud can be minimized using certain controls, reducing losses for companies which have helped delivery companies cut fraud in half, to 5% or less in the past two years.

Marqeta makes its money on a per-transaction basis, very similar to Visa and Mastercard. While the company is quiet on how much it makes per transaction, it is estimated that the average fee it charges is about 1% prior to rebates.It's no surprise to see that both payments companies have partnered with and invested in Marqeta. These heavyweights recognize the value of a Marqeta partnership, for things from launching new card programs to utilizing Marqeta's developer-friendly platform to help bring payments products to the market faster.

Forbes estimated Marqeta pulled in $300 million in revenue in 2019, and had doubled its revenue every year since 2016. 2020 is sure to have been another record year for the company, thanks to increased demand among key customers like Instacart and DoorDash. A drastic change in consumer behaviors brought on by the effects of the coronavirus pandemic has benefited many of those up-and-comers Marqeta partnered with early on.

The company filed paperwork confidentially last week and could go public as soon as April. In its last funding round in May 2020, its valuation was pegged at $4.3 billion. However, with the company nearing its public debut, it is seeking a valuation of $10 billion to $15 billion. With support from huge names in the payments space, like Visa, Mastercard, and Goldman Sachs, Marqeta may just be a success out of the gate.

What has me most excited is its strategic partnerships with many potential disruptors that have gone public in recent years. These partnerships will be a key driver of revenue growth for the company for years to come, and is why this stock is high on my list of future IPOs to buy.