Please ensure Javascript is enabled for purposes of website accessibility
Log In Help Join The Motley Fool
Free Article Join Over 1 Million Premium Members And Get More In-Depth Stock Guidance and Research
By Jim Halley - Feb 23, 2021 at 9:03AM

There are plenty of stocks that will pay you a dividend each month. The trick is finding the right ones at the right time.

STAG Industrial (STAG 0.31%), Shaw Communications (SJR 0.68%), and AGNC Investment (AGNC 0.34%) stand out right now for me among the stocks that pay a monthly dividend. There are a surprising number of companies that pay a monthly dividend, but many of them are struggling and Realty Income, perhaps the best-known monthly payer, has a slightly rich valuation at the moment.

Some investors look at monthly payers as a gimmick, saying what matters is how much a company pays in a dividend per year, regardless of when the dividend is paid. That's true, to some extent, but monthly dividend payers can help retirees and others living on fixed incomes manage their incomes more easily. After all, there are certain things, like rent or a mortgage payment, or even a wireless bill, that won't wait to be paid every quarter.

STAG and AGNC are real estate investment trusts (REITs), while Shaw Communications is a Canadian cable company that has branched out into wireless. The share prices for the three are all down over the past 12 months but up since the start of 2021, and all three have dividend yields of 4% or more. 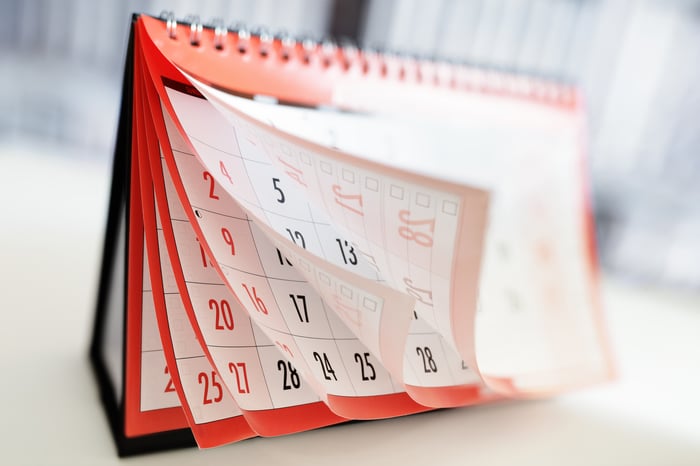 Shaw Communications has been overlooked

Shaw's stock is down more than 8% over the past year, but since the beginning of 2021, ii's up a little over 1%. The company's dividend is $0.078 per monthly share, after a 2.6% raise last month, giving it a yield of just under 5%. Its cash dividend payout ratio, trailing 12 months (TTM), is an easily sustainable 64%. The company pays its dividend from free cash flow, and it increased free cash flow 23% in the first quarter of fiscal 2021, year over year.

Shaw was a struggling cable company that helped itself around five years ago by adding a wireless business, and it has had five consecutive years of rising revenue. The company made 5.4 million Canadian dollars in revenue in 2020, 68% of which was from consumer wireline, 22% from wireless, and 10% from business wireline customers. Since 2016, it has grown its wireless subscriber base by 90% to 1.9 million subscribers, and over the past three years, it has increased funds from operations (FFO) by more than 45%.

In the company's first-quarter report, it said it landed 101,000 new wireless customers, a rise of 31% year over year. Its wireless revenue for the quarter was CA$215 million, up 9.7% compared to the same period in 2020. However, overall revenue in the quarter was CA$1.37 billion, down 0.9% year over year, with the company saying the growth in internet revenue was offset by declines in video, satellite, and phone revenues. With the company just launching Shaw Mobile last summer, expect revenues in that area to continue to buoy the company's bottom line. 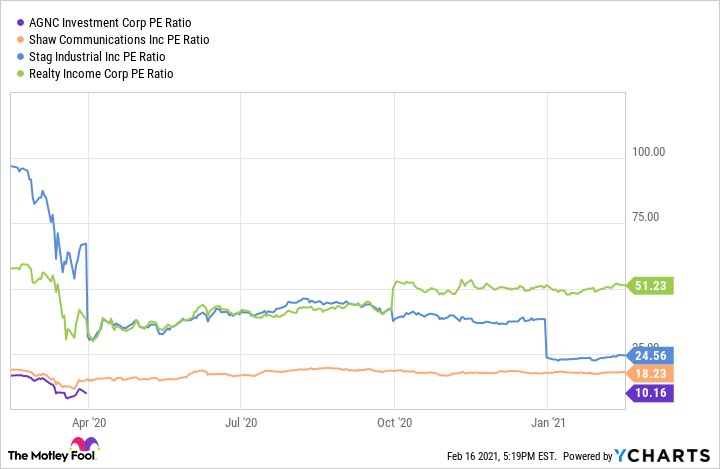 AGNC Investment on the rebound

Shares in AGNC Investment are down more than 15% over the past year but up more than 5% this year. The company cut its dividend 25% to $0.12 per monthly share in April 2020, when the pandemic hit the U.S. However, the yield is still high enough at 9.26% to be very enticing. The company is a mortgage REIT, as it buys mortgage-backed securities that are issued and guaranteed by Fannie Mae and Freddie Mac. That means that AGNC still gets paid, even if borrowers are behind in their payments.

The company's funds from operations have dropped the past three years, and the company's shares dropped significantly last spring when the pandemic hit. However, lately, the company's financials have been on the rebound, especially after the Federal Reserve purchased its own share of mortgage securities, propping up the market.

The company also went from losing $2.4 billion in the first quarter to net income of $775 million in the fourth quarter, so the trend is on the upswing, even if the market hasn't completely caught on yet. 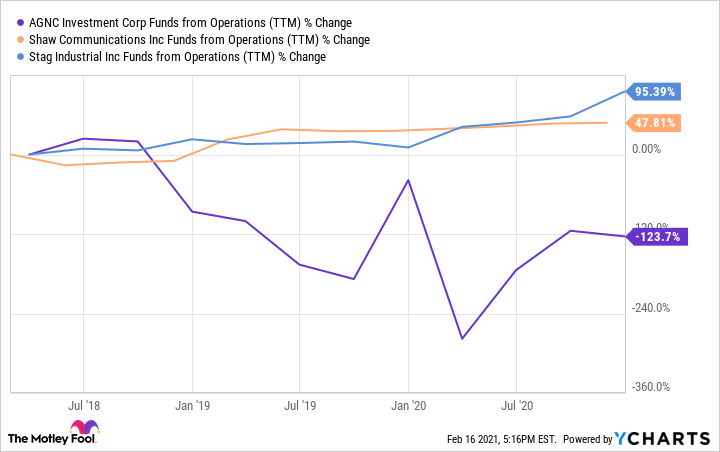 STAG Industrial's pickiness is paying off

STAG Industrial, after a slow start to the year, has become bullish on its future. The REIT's shares are up more than 3.5% this year. STAG, which focuses on triple-net leases for single-tenant industrial properties, said in a fourth-quarter earnings call that it bought 32 buildings in the fourth quarter for a total price of $579.9 million, the biggest quarterly purchase the company has made. The company said it expects to spend between $800 million to $1.2 billion this year on more properties.

The yield on the company's $0.121 monthly dividend is 4.44%, almost pedestrian compared to the other two companies, but there's less risk with STAG because of the quality and diversity of its tenants, which include major automakers, e-commerce retailers, logistics companies, and the federal government's General Services Administration, among others. Despite a year that has been challenging for business, Stag said it collected 99.6% of rental billings for the year. The company's funds from operations have increased more than 95% over the past three years.

I consider all three dividend stocks to be well-priced, particularly for companies that pay out a dividend each month. I believe that's because each of them is a little misunderstood.

Shaw was hurt initially by cord-cutting, but its adoption of wireless is picking up speed. AGNC worried many when markets swooned initially at the beginning of the pandemic. However, as we've seen, housing has been one of the success stories over the past year, and AGNC has more than turned the corner on its slow spring in 2020. STAG, because of its diversification and the growth of e-commerce, is hitting its stride.

Of the three, STAG is the most secure, with revenue growth expected this year, an ideal fit for risk-adverse investors. I think AGNC may have the most upside this year as the housing market is still red-hot, but it also has the most risk because of its trend of falling funds from operations. Shaw is also worth watching as it continues to grow its wireless business.