Please ensure Javascript is enabled for purposes of website accessibility
Log In Help Join The Motley Fool
Free Article Join Over 1 Million Premium Members And Get More In-Depth Stock Guidance and Research
By Jennifer Saibil - Updated Feb 23, 2021 at 10:09AM

Should you consider the Brazilian payments company for your portfolio?

StoneCo (STNE 4.24%) is a major fintech (financial technology) company in Brazil that has been a force in the country's digital revolution. But with U.S. companies such as PayPal Holdings and Square making global moves, does StoneCo have high growth prospects, and is it anything to be excited about?

StoneCo offers financial and business management solutions for small and medium-sized businesses in Brazil. It offers hardware, such as point-of-sale devices, and services, such as electronic payments and credit card processing. And with a broad and growing assortment of products, it's taking advantage of an evolving financial services environment in its home market. 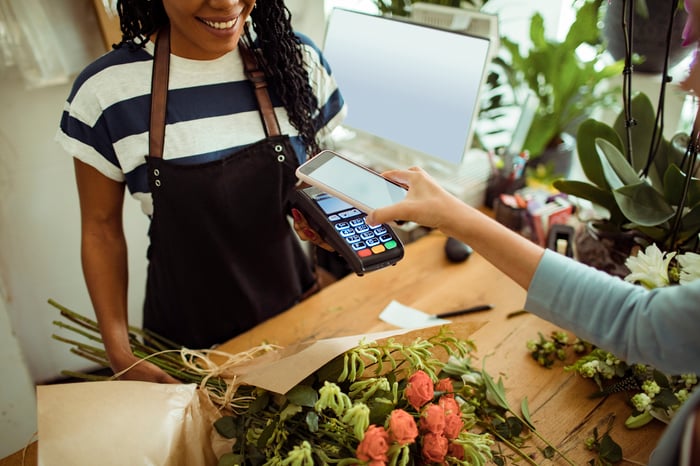 Brazil is the largest country in South America, with more than 200 million people. Despite its size, it also has a comparatively underdeveloped financial services market, largely lacking the digital payment options of a country like the United States. According to a McKinsey report, cash accounts for 28% of U.S. sales and 74% of sales in Brazil.At the same time, Brazil is one of several counties where the growth of electronic payments is more than 10%, making it a prime target for digital payment companies,putting StoneCo in an excellent position.

Brazil's population is also relatively young and social-media-savvy, and according to a 2019 report by JPMorganChase, it has a $24 billion e-commerce market, as well as an $8 billion mobile market. That report also found that online spending made up only 3% of retail sales, meaning it's a wide-open market.

A pandemic slowdown and recovery

Brazil was hit particularly hard by COVID-19 amid a chaotic response and lack of resources.Experts predict a prolonged recovery. StoneCo's business slowed down during the pandemic as a result, but revenue and income remained positive throughout. Sales began to accelerate in the third quarter, growing 39%, and total payment volume (TPV) increased 114%. That included benefits from the coronavoucher, Brazil's version of the stimulus package. Even without that, TPV increased 48%.

StoneCo supports many physical businesses, which were its main business before the pandemic. But it made investments in its digital infrastructure prior to the onset of COVID-19 are fueling growth, and digital TPV grew 575% in the third quarter, or 76% without the coronavoucher.

StoneCo rolled out several new features during the third quarter, including its ABC platform, which offers instant payments, wire transfers, and other options that bring the program up a notch from it's previous less-digital focus.

StoneCo announced in August that it will acquire Linx, which operates e-commerce platforms, to enhance its own full-business platform that's still in development. This move expands its services and opens up new revenue streams.

Banking revenue grew more than 300% in the third quarter, and banking transactions more than 700%. This is a fast-growing area that the company can harness as part of its broader product assortment.

The company faces competition from other South American fintechs, such as MercadoLibre's Mercado Pago, a digital payment service, and PagSeguro Digital. MercadoLibre is headquartered in Argentina and operates in several South American countries, but Brazil accounts for almost two-thirds of revenue and most of the service's new customers.Brazil has more fintech companies operating than any other South American country, including nearly 200 new fintechs since 2018. The largest is Nubank, which has 20 million clients, a compared with StoneCo's just over half a million active clients and less than 400,000 digital banking customers.

Unlike some of its peers, StoneCo turns a profit, which grew 30% over the prior year in the third quarter. It trades at a high 153 times trailing 12-month (TTM) earnings, but that's much cheaper than Square, at 423 times TTM earnings, or MercadoLibre, which doesn't post consistent profits.

StoneCo offers a large, varied, and innovative suite of services that rivals competition and is expanding. Fintech is a developing industry, and StoneCo has a bright future ahead as a growth stock. The share price had a slow rise before a sharp advance in February triggered by bullish analyst recommendations, and shareholders can expect future gains.