Please ensure Javascript is enabled for purposes of website accessibility
Log In Help Join The Motley Fool
Free Article Join Over 1 Million Premium Members And Get More In-Depth Stock Guidance and Research
By Jim Halley - Feb 23, 2021 at 6:30AM

The biotech has a lot riding on whether the FDA approves its potential Alzheimer's treatment, aducanumab.

There are two ways to imagine where Biogen (BIIB 3.40%) will be in five years. The optimistic scenario is that the biotech company is profitable, underpriced, and has a potential blockbuster drug, aducanumab, that if approved by the U.S. Food and Drug Administration (FDA), would allow the stock to take off. There's no cure for Alzheimer's, and there hasn't been a therapy approved to treat the disease since Namenda came along in 2003. A drug that could slow the disease would be huge for the Alzheimer's community (and for Biogen).

The pessimistic version is to expect that aducanumab, like so many other potential Alzheimer's therapies, won't gain FDA approval. In that worst case scenario, Biogen will be a company with declining revenue and a relatively small pipeline whose biggest sellers are facing increasing pricing pressure. So -- which is most likely? 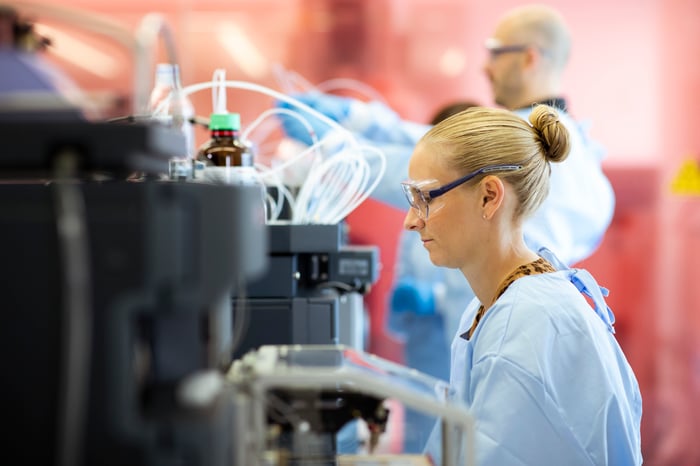 First, let's look on the bright side

There's a long history to the up-and-down life of aducanumab. Biogen is co-developing the drug with another pharmaceutical company, Eisai. The drug is a manmade antibody built to remove the buildup of misfolded beta-amyloid proteins that have been found in the brains of Alzheimer's patients.

The company saw positive results in two trials for the drug, which showed that aducanumab slowed cognitive decline and memory decline associated with Alzheimer's, the sixth leading cause of death in the U.S. Those findings didn't hold up in a third trial, however, so Biogen and Eisai halted two phase 3 trials in March 2019.

However, after examining the studies in more detail, particularly as they related to patients who received larger doses of the drug, Biogen applied for a biologics license application (BLA) for the drug in July. In August, the FDA accepted the BLA and granted the drug priority review. In November, the FDA released a preliminary report that said the drug was both safe and effective.

However, when an FDA advisory committee met a few days later, they voted against approval of the drug, saying the conflicting trials failed to show the drug's efficacy, and recommended another trial.

The committee's decision isn't binding on the FDA. The latest twist in the story came earlier this month, when the FDA extended its review period for the drug's BLA by three months, to June 7.

While that's not a win for Biogen, it's not a loss either. It shows that the FDA may be looking for a way to approve aducanumab and is excited about its potential. If that's the case, the drug could be worth $22,000 per year, per patient, one National Institutes of Health study said.

If you think the FDA will approve the drug, it makes sense to buy the stock now, with it trading at 11.4 times earnings. That's compared to the biotech's sector median price-to-earnings (P/E) ratio of 31. 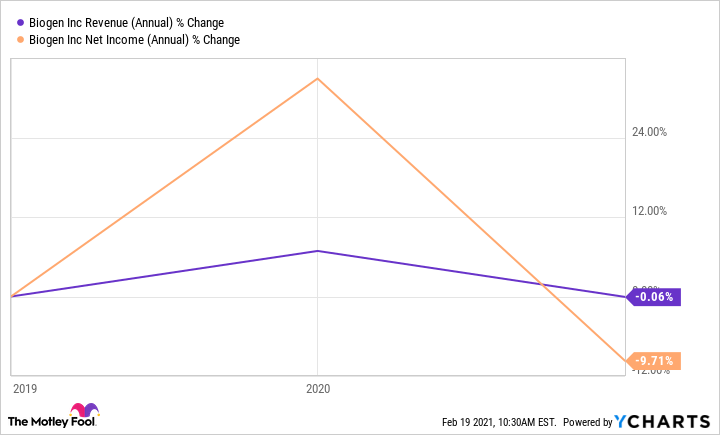 Last year, Biogen's revenue was $13.4 billion, down 6% compared to 2019. The company said it expects revenue to drop further this year, totaling between $10.45 billion and $10.75 billion. That figure, the company said, assumes that aducanumab will be approved in June by the FDA with the drug's launch soon after that, though it said it wouldn't expect a huge revenue impact over the last six months of the year.

If the drug isn't improved, that $10.45 billion number might be hard to match in 2022, considering the clear downward trend in the company's reported fourth-quarter and 2019 numbers. Revenue of $2.8 million in the quarter spelled a 22% decrease year over year.

Is the risk worth it?

Clearly, purchasing shares in Biogen and hoping that aducanumab will be approved is a risk. If the FDA doesn't approve the drug in June, Biogen's shares will plummet. However, with a P/E ratio of less than 11.5, it seems likely that the failure of aducanumab has already been priced in -- to some extent. The stock, trading at around $280 this week, has traded between $223.25 and $363.92 over the past 52 weeks.

For my risk tolerance, Biogen is still too much of a gamble. But at the right price, say below $250 per share or another benchmark of choice, the risk may yet be worth the potential reward for some investors.