Please ensure Javascript is enabled for purposes of website accessibility
Log In Help Join The Motley Fool
Free Article Join Over 1 Million Premium Members And Get More In-Depth Stock Guidance and Research
By Lawrence Rothman, CFA - Feb 24, 2021 at 6:52AM

AMC Entertainment caught Wall Street's eye this year, but there are reasons to tread carefully.

To put it bluntly, there are certain stocks that belong on your "do not buy list." There are many reasons for this, such as a declining business and an unhealthy balance sheet. While it's tempting to view them as potential value stocks, their price could always fall further as results worsen.

AMC Entertainment (AMC 3.48%) belongs in this category. The stock has had a wild ride this year, starting 2021 at around $2 before shooting up to about $20 by the end of January. Helped by the Reddit group WallStreetBets, the shares got caught up in the short squeeze that also propelled other stocks such as GameStop.

These kinds of moves are unpredictable, and the stock is still more than double where it started in 2021. But investing in hopes of a similar move will likely only end in pain. 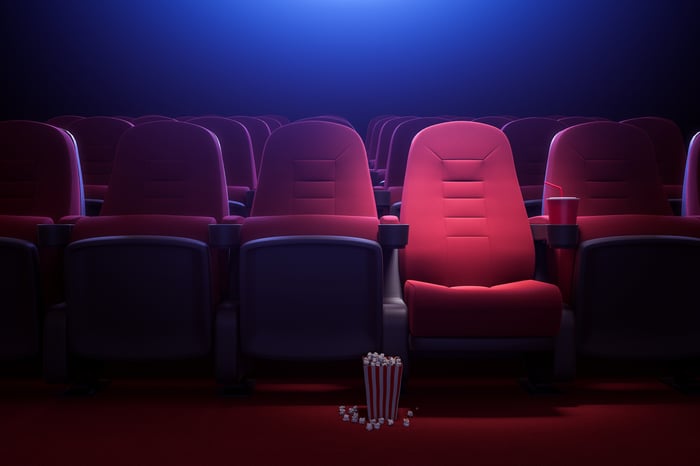 Certainly, AMC's results were severely hurt by governmental restrictions intended to control the spread of COVID-19. In the third quarter, as authorities relaxed certain limits on public gatherings, revenue fell by nearly 91% to $119.5 million, and AMC's loss widened to $905.8 million from $54.8 million.

However, the company continues to contend with various issues, including shorter periods before movies can appear on streaming services like Netflix, which is hurting movie theater attendance. In 2019, AMC's admission revenue fell by more than 2.5% to $3.3 billion, partly due to lower patronage. Revenue from food and beverages helped offset this decline, rising 2.9% to $1.7 billion. However, the increase came about due to AMC raising prices, which will likely prove difficult to repeat, particularly in a slower economy and amid greater competition from the likes of premium video on demand and streaming services.

This sets up a major challenge for AMC since consumers now have various choices for watching first-run movies.

Meanwhile, AMC has run up quite a debt total. True, it has averted bankruptcy a couple of times last year, but that's no reason to buy the stock. The most recent step was January's $917 million debt-and-equity issuance. CEO Adam Aron said, "Any talk of imminent bankruptcy for AMC is completely off the table."

So, while management opportunistically raised money, this only kicks the can down the road. It still needs a solid plan to turn around the operations.

With ever-increasing ways to watch movies, that's a tall order. Perhaps AMC can pull it off, but I wouldn't bet on it.