Please ensure Javascript is enabled for purposes of website accessibility
Log In Help Join The Motley Fool
Free Article Join Over 1 Million Premium Members And Get More In-Depth Stock Guidance and Research
By Keith Speights - Feb 26, 2021 at 6:00AM

The company's collaborations and CpG 1018 vaccine adjuvant are playing an increasingly important role.

Dynavax Technologies (DVAX -1.14%) has been chock-full of good news so far this year. Earlier this month, the company announced plans to initiate a phase 2/3 clinical study of Clover Biopharmaceuticals' COVID-19 vaccine candidate with Dynavax's CpG 1018 adjuvant. The U.K. ordered an extra 40 million doses of another COVID vaccine that uses the company's adjuvant. And Dynavax won a $99 million deal with the Coalition for Epidemic Preparedness Innovations (CEPI) to supply CpG 1018.

You can now add even more good news to the list. Dynavax announced its fourth-quarter results after the market closed on Thursday. Here are the highlights from the company's Q4 update. 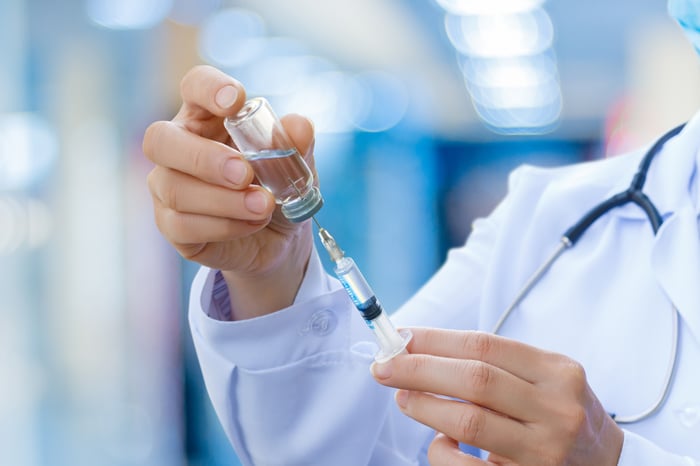 Dynavax reported revenue in the fourth quarter of $19.6 million. This reflected an 85% rise from the prior-year period revenue total of $10.6 million. It also trounced the Wall Street consensus estimate of $13.1 million.

Dynavax ended the fourth quarter with cash, cash equivalents, and marketable securities of $165 million. The company's cash position stood at $151 million as of Dec. 31, 2019.

Hepatitis B virus (HBV) vaccine Heplisav-B continued to pick up momentum in the fourth quarter. Dynavax reported sales for the vaccine of $11.5 million, an 8.5% year-over-year increase. The company said that its market share in targeted accounts jumped to 26% in Q4 from 20% in the prior-year period.

Dynavax's vaccine adjuvant CpG 1018 also contributed to its revenue growth. The biotech recorded net revenue of $1.6 million in the fourth quarter from the adjuvant, compared to no revenue for CpG 1018 in the Q4 of 2019.

However, the company's biggest growth driver in the fourth quarter came from its collaborations. Other revenue totaled $6.4 million in Q4. In the prior-year period, Dynavax's other revenue was only $12,000.

Dynavax's bottom line improved in part because of its solid revenue growth. The company also spent significantly less in the fourth quarter, compared to the same period in 2019. Research and development expenses fell 23% to $9.5 million. Selling, general, and administrative expenses decreased 12% to $17.8 million.

The biotech stock should have several potential catalysts ahead. A final report from the post-market study of Heplisav-B should be on the way in Q2. Dynavax's collaboration partners using CpG 1018 should announce data readouts throughout the year. The company expects to report results from its phase 1 study of an experimental Tdap (tetanus, diphtheria, and pertussis) vaccine with CpG 1018 as an adjuvant in Q4.

CpG 1018 seems likely to play an increasingly important role in Dynavax's future. CEO Ryan Spencer stated that the adjuvant "could be utilized in up to 500 million to 1.5 billion doses of vaccine annually starting in 2022, with additional capacity expansion available depending on global demand."

Heplisav-B will remain key to the company's fortunes, as well. Dynavax recently received approval from the European Commission for the HBV vaccine and plans to launch it in Europe beginning in the fourth quarter of 2021.