Moderna (MRNA 0.44%) and Pfizer (PFE 0.80%) may soon be sharing the coronavirus vaccine market with two more companies. Johnson & Johnson and Novavax are approaching the finish line in this race. A U.S. Food and Drug Administration (FDA) committee meets today, Feb. 26, to discuss a possible Emergency Use Authorization (EUA) for the Johnson & Johnson candidate. A trial report released this week shows Johnson & Johnson's investigational vaccine fulfilled (and exceeded) efficacy and safety requirements. As for Novavax, the U.S., Europe, the U.K., and Canada have begun rolling reviews of the company's investigational vaccine.

I'm optimistic about both companies' chances for authorization. The FDA set a bar of 50% efficacy as a basis for EUAs. Johnson & Johnson and Novavax have both surpassed that. They've reported 66% and 89.3% overall efficacy, respectively. And both have shown positive safety data. But the key to success in this billion-dollar vaccine market isn't just earning approval. It's about handling new strains of the coronavirus. 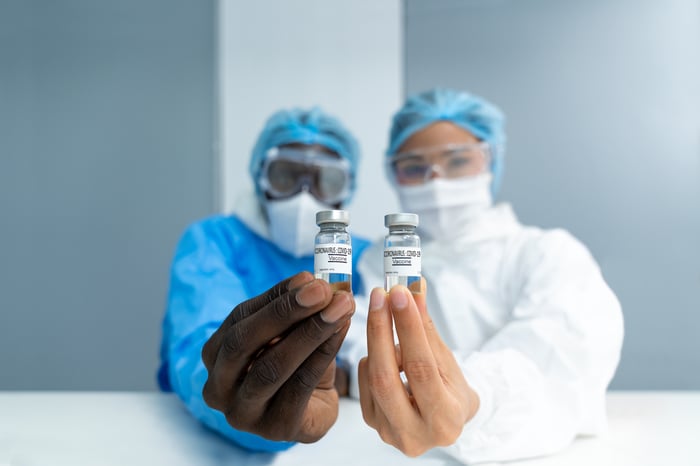 Coronavirus variants originating in Brazil, the U.K., and South Africa have gained ground since the start of the year in those countries and beyond. The Moderna and Pfizer vaccines showed they could protect against those strains during in vitro testing. Still, vaccine effectiveness decreases against the new strains versus the original coronavirus strain. Now, how do the potential newcomers to the vaccine market measure up against each other in terms of combatting new versions of the virus?

Novavax recently reported results from a U.K. phase 3 trial and a South Africa phase 2b trial. The locations of these trials allowed Novavax, like Johnson & Johnson, to see how its vaccine candidate performed against new strains in a real-world setting. In the U.K. trial, the investigational vaccine showed 85.6% efficacy against the U.K. strain. In the South African trial, more than 90% of coronavirus cases that occurred were of the South African strain. The vaccine demonstrated 60% efficacy there. Novavax efficacy results pertain to the prevention of mild, moderate, and severe COVID-19.

Johnson & Johnson beats Novavax against the South African strain. Performance against this variant is key for one reason. It's been known for "escaping" the body's defense system: those antibodies produced following vaccination. And that means this strain can continue to spread and become dominant even in an environment where people are vaccinated. So we need just the right vaccine to stop this variant in its tracks. And today's data show that Johnson & Johnson's candidate might be it.

One particular element makes Johnson & Johnson's efficacy even more impressive: The vaccine candidate is administered in one dose. So far, among current vaccines or candidates close to market, it's the only one-dose option. Johnson & Johnson is also studying a two-dose regimen of its investigational vaccine. That phase 3 trial is ongoing. It's possible a second dose will lift efficacy even higher. Investors in healthcare stocks should keep an eye out for data from that trial.

Still, Novavax remains in a strong -- and proactive -- position when it comes to tackling new strains. The company said it's investigating the possibility of a booster or a combined vaccine to handle variants as they arise. It expects to choose a candidate or candidates soon and start clinical testing in the second quarter. The good news is that the FDA says these sorts of efforts wouldn't require extensive new clinical trials. And that means a quicker time to market.

For now Johnson & Johnson scores the win because it can handle today's most dangerous coronavirus variant. But this contest isn't over. And it's one that investors in coronavirus stocks should watch carefully in the coming months.