Management is optimistic after closing out a record growth year.

Shares fell immediately following the report after having soared in the past year. But, in a conference call with Wall Street analysts, CEO David Burwick and his team issued uniformly positive projections around market share and profitability in 2021 despite growing competition. 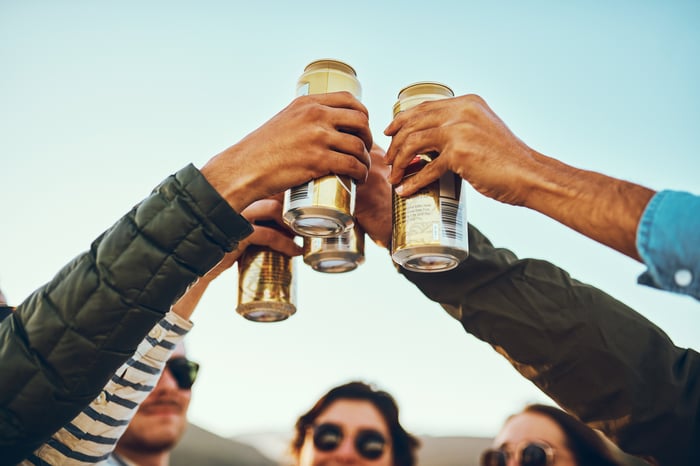 Every alcoholic beverage producer is targeting the popular hard seltzer niche, but Boston Beer defended its dominant position. Depletions, an industry measure of sales, rose 26% in the fourth quarter to meet investors' expectations and put the company at 37% growth for the year. Constellation Brands (STZ 0.55%), which successfully introduced Corona Hard Seltzer, notched 11% growth in 2020 .

The Truly brand had no trouble extending its market share lead even as competitors like Corona established new brands. In fact, the franchise more than doubled its volume last year. "Truly increased its market share from 22% to 26%," Burwick said, "and was the only national hard seltzer not introduced in 2020 to grow share."

No letup on expenses

Boston Beer's earnings continued to struggle under the weight of ballooning costs. Management had to rely on third-party brewers to meet hard seltzer demand, which pressured gross profit margin by more than executives had planned going into Q4. The company also accelerated advertising in a bid to protect Truly's dominant position. 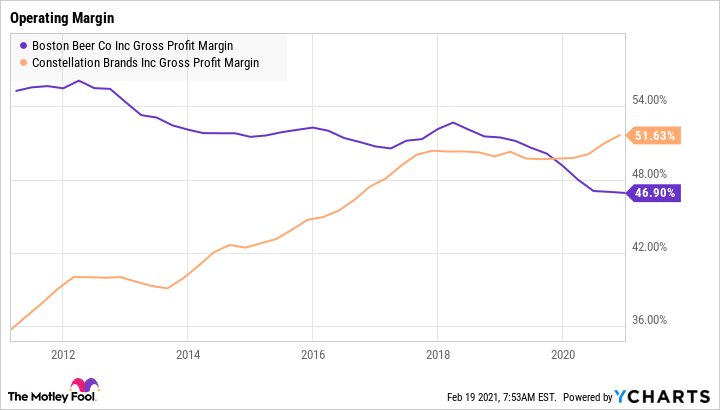 This cost posture isn't ideal, and management acknowledged that by announcing a restructuring program aimed at lowering expenses over the next few years. But for now Boston Beer is still prioritizing growth over profitability. "We remain prepared to forsake short-term earnings," Burwick explained, "as we invest to sustain long-term profitable growth."

Another bubbly year ahead

Boston Beer is targeting another industry-leading growth year ahead, with depletions rising by between 35% and 45%. Several 2021 product introductions are already lifting sales in the Truly and Twisted Tea franchises, and management also expects the Samuel Adams brands to return to growth as the pandemic winds down.

Investors will have to wait a bit longer for a profitability rebound, though. Gross profit margin will be weaker than originally forecast, CFO Frank Smalla warned, even though selling prices should rise by between 1% and 2% this year.

Boston Beer still expects to endure elevated costs from its capacity squeeze and from its advertising blitz. "While we are in a very competitive business, we are optimistic for continued growth of our current brand portfolio and innovations," Burwick said.

The good news is that Boston Beer should have an even more dominant position in the hard seltzer category by the time its restructuring projects start paying off in 2022. That position could deliver explosive earnings growth for several years.

But the big question is whether demand will still be as high for the product at that time. Boston Beer suffered from a sales slump after dominating the craft beer space for years as dozens of tiny breweries picked away at its market share. Management is doing what it can to try to prevent a similar episode from playing out in the hard seltzer niche.