Please ensure Javascript is enabled for purposes of website accessibility
Log In Help Join The Motley Fool
Free Article Join Over 1 Million Premium Members And Get More In-Depth Stock Guidance and Research
By Rhian Hunt - Mar 1, 2021 at 9:12AM

These companies have the potential to chow down on profits from their strategic initiatives.

Among consumer discretionary stocks, some food and beverage stocks were hit hard by the COVID-19 pandemic in 2020 as restaurants closed for months and foodservice orders consequently plummeted. However, regardless of disease outbreaks, political upheavals, and the like, people still need to eat and drink, so these companies also have a built-in advantage for recovery. Looking ahead to the rest of 2021, three names in the sector stand out as ones Fools interested in these companies might want to consider: McDonald's (MCD -0.41%), Monster Beverage (MNST 0.25%), and The Coca-Cola Company (KO 0.36%).

A big year for Big Macs?

The Golden Arches' fourth-quarter (Q4) results show strong signs McDonald's business is returning to normal after 2020's coronavirus sucker punch, led by the U.S., Australia, and Japan. Q4 2020 comps (comparable store sales) rose 5.5% above Q4 2019's figures, "ending the year with six consecutive months of positive comps," as reported by CFO Kevin Ozan. The company also launched close to 500 new restaurants during 2020 and invested heavily in its digital business. According to its earnings conference call, its executives expect the rebound and its savvy investments to push operating margins above 40% during 2021.

Simultaneously, McDonald's is taking aim at some potentially big opportunities. The McPlant burger, featuring a Beyond Meat (BYND -12.80%) plant-based patty, has returned for several months of testing in Sweden and Denmark. McDonald's says it will launch the McPlant in other countries assuming positive Scandinavian feedback. 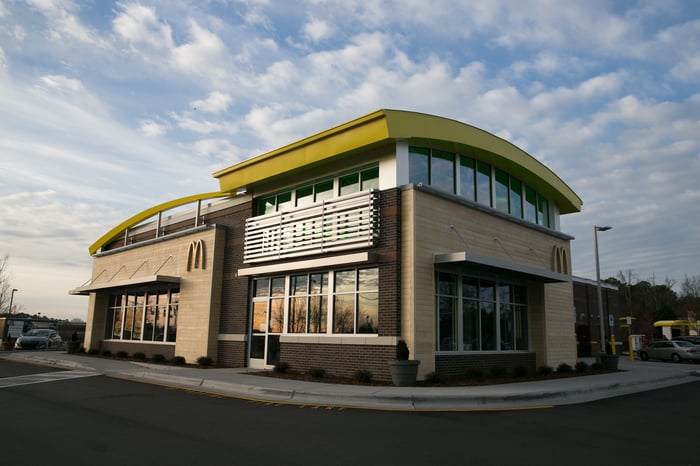 COVID-19's effects on the meat market have put some additional zing in the already growing demand for plant-based substitutes. Research by MarketsandMarkets predicts a 17% compound annual growth rate (CAGR) for plant-based meat in 2021, with the market mushrooming from an estimated $3.6 billion in 2020 to a projected $4.2 billion in 2021. Even better from McDonald's perspective, MarketsandMarkets forecasts the "burger patties sub-segment in the product segment is projected to be the largest and the fastest-growing segment during the forecast period." The return of the McPlant appears to be perfectly timed to cash in on this skyrocketing trend.

Finally, McDonald's has added a bit of fowl play to its playbook, with a new chicken sandwich released on Feb. 24 as the restaurant chain's entry into the "chicken sandwich wars," that were disrupted but not ended by COVID-19. With crispy, deluxe, and spicy versions appearing on the menu, VP of Menu Innovation Linda McGosen claimed "all chicken fans -- from traditionalists to spice enthusiasts -- will discover a new menu favorite they'll come back for time and time again."

While public response is still unknown, Citigroup (C -0.38%) finds the prospects mouthwatering, according to an early February research note. Citi's analyst Sergio Matsumoto forecasts a 6% to 12% increase in the chain's comps during 2021's first half, thanks to the chicken sandwich alone.

With multiple factors in its favor, including a renovated digital segment, robust new store openings, a measurably strong rebound from pandemic lows, potential entry into the explosively growing plant-based burger market, and its chicken sandwich launch, McDonald's stock looks likely to put on some significant weight in 2021.

Bellying up to the hard seltzer bar

Gulping down significant early 2021 gains and largely keeping pace with the S&P 500's ongoing ascent, Monster Beverage is another consumer discretionary stock with some potential room to grow this year. The company appears to have both a hard seltzer launch and more international expansion in its crosshairs, both areas where it could generate some outstanding profits with good strategy. 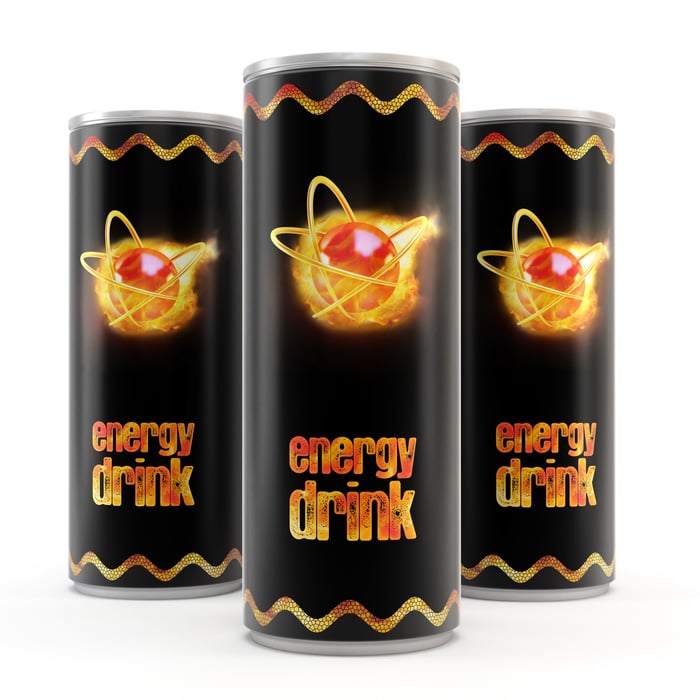 Monster's entry into the hard seltzer arena isn't written in stone yet, but the company indicated two new products will be in its "innovation pipeline" during its Jan. 14 "virtual investor meeting" webcast. In response to a question late in the webcast, the co-CEO said the company continues to "look [at] and evaluate" the seltzer market, for both the "alcoholic and non-alcoholic" categories. He went on to state that "we are involved in developing products" but the company is "reluctant to simply launch and become [...] one of many just following the same 'me-too' products" and is looking for an opportunity to "have a point of difference" when it launches.

While the company may or may not provide additional information during its upcoming quarterly conference call, it seems clear Monster is planning to eventually get into the hard seltzer (and non-alcoholic seltzer) market. With 10 months remaining in 2021, a launch this year seems fairly likely.

The hard seltzer space is growing fast, but also growing more competitive, with Coca-Cola now weighing in with a probable U.S. launch of its Topo Chico hard seltzer during the first six months of 2021, as CNBC reported last September. While hard seltzer sales peaked last September at 9.3% of beer sales, they still accounted for 8.3% of sales for the week ending Jan. 10, showing continued strength into the new year, according to Evercore ISI research. Evercore's analysts expect this metric to surpass 11% by 2022, which, given the size of the beer market, underlines how Monster is poised to enter a dynamically growing sector with plenty of room for new products.

Hard seltzer isn't Monster's only current project aimed at boosting sales, however. The company is also zeroing in on widespread international expansion of its Reign and Predator beverage lines this year. Several dozen more countries will see the "thermogenic" fitness drinks appearing on shelves in 2021. With sales profitable in all international markets for Monster and growth ranging as high as 42%, Cowen analysts note the company's international "growth opportunities remain readily apparent" and look to China and India as potentially major opportunities for the planned expansion.

With a high likelihood of entering the powerfully growing hard seltzer market soon, and definite plans for bringing its successful energy drinks lines to fresh overseas regions, Monster looks like a strong contender for noteworthy growth during the rest of this year.

Coke looking to win back its fizz

Of the three companies, Coca-Cola is struggling most with continued COVID-19 fallout, with its sales still down 3% year over year for the most recent quarter. However, the company does report it's no longer losing market share. It has positive cash flows, and volumes are increasing, potentially pointing to the early stages of a rebound. While Coca-Cola's business model is struggling in part because it's heavily dependent on restaurant (foodservice) purchases, two recent initiatives show promise for the near future as well as the longer term. 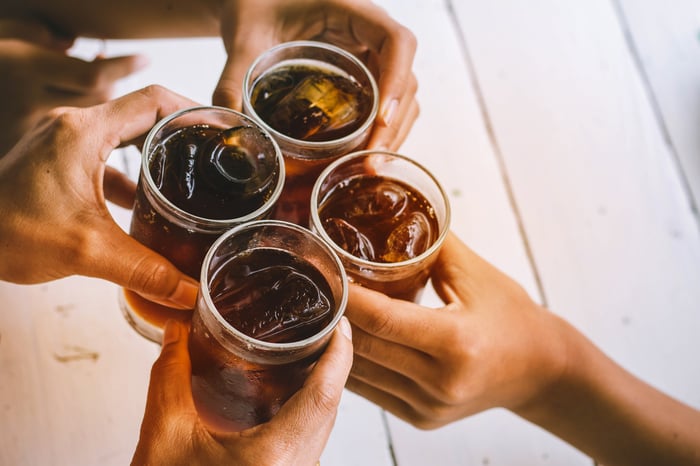 First, Coca-Cola is lining up to acquire the sports drink company BodyArmor, moving from minority to controlling stakeholder status. BodyArmor boasts an impressive 13% market share in its sector and has seen its sales skyrocket 43% year over year, as reported by Nielsen. While the deal isn't firm yet, with BodyArmor co-founder Mike Repole telling BevNET "reports that Coca-Cola is purchasing a controlling interest in BODYARMOR are premature," Repole says the acquisition is "a distinct possibility."

Second, Coca-Cola hasn't changed its plans to introduce the Topo Chico hard seltzer brand to the U.S. by or before the end of June 2021, marking its first American foray into adult beverages in over three decades. With the hard seltzer market growing to $3 billion between July 2019 and July 2020 according to Bump Williams Consulting Co., Coca-Cola is positioned to start profiting from one of the fastest-growing alcoholic beverage trends of recent years. According to CNBC, CEO James Quincey stated that "we're going to follow the consumer" into the hard seltzer market.

Either of Coca-Cola's entries into new sectors could potentially help the company launch fresh growth in 2021, and both together offer even more possible benefits. Hard seltzer and energy drink sales aren't dependent on restaurants, so both Topo Chico and BodyArmor should give the beverage giant much-needed income streams free of the ongoing troubles of the foodservice sector that are weighing on Coke's traditional brands. Breaking out into these fast-growing, foodservice-independent markets is an excellent sign for the company's sales and profitability moving deeper into 2021.

Why these three companies look good for 2021

The three food and beverage companies described here are worth considering for a Foolish portfolio during 2021, both because they're showing signs of life after the worst of the pandemic, and because they're innovating in the correct way.

McDonald's is tapping into the popular chicken sandwich and plant-based burger categories, along with building up both its brick-and-mortar restaurant presence and expanding its digital sales. Monster and Coca-Cola are both looking to enter the hard seltzer market, which is maintaining its strong momentum and, given its swift growth, should have room for both companies. Monster's international sales and Coca-Cola's new energy drink brand are likely to increase growth even more. All three enterprises appear to have a good chance to grow significantly this year, and buying into their stock now could well yield gains over the next 10 months and beyond.