Please ensure Javascript is enabled for purposes of website accessibility
Log In Help Join The Motley Fool
Free Article Join Over 1 Million Premium Members And Get More In-Depth Stock Guidance and Research
By Lawrence Rothman, CFA - Mar 1, 2021 at 10:30AM

Can you rely on Home Depot's dividends?

When looking at your investment choices, dividends are a good way to generate regular investment income. However, it's not merely buying the highest-yielding stocks or even the ones with strong payment histories.

There are a couple of key criteria a company must possess before you consider it an elite dividend company and invest your money. You want to make sure a company won't have to cut its dividend, since that hurts your income and the stock price also typically falls on the news, providing a double whammy. But to achieve greatness, it should also have the ability and willingness to raise payments. 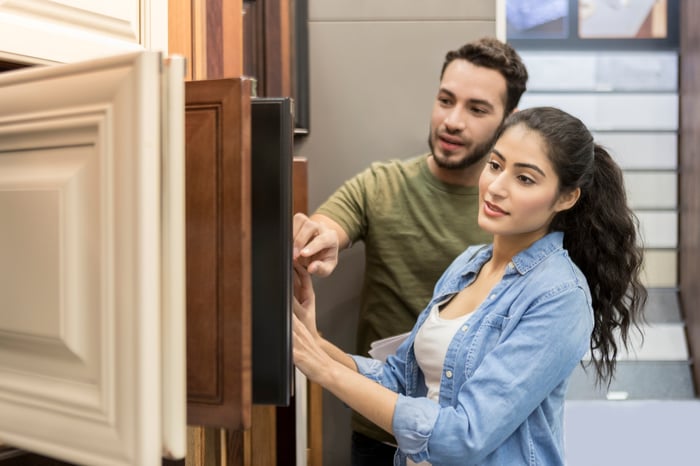 Home Depot is the largest home improvement retailer when measured by sales. In its latest fiscal year, which ended on Jan. 31, its sales were $132.9 billion, up by about 20%. The company doesn't just generate a hefty amount of top-line growth -- it also produces an increasing amount of profit. Its diluted earnings per share rose by 16.5% to $11.94.

Home Depot's higher earnings translate into increased free cash flow. It totaled $16.4 billion in the latest year, which handily covered the $6.5 billion of dividends. The pandemic boosted traffic, as homebound people shopped at Home Depot to pick up products to work on various projects that were previously put to the side. Still, its 2019 free cash flow was $11 billion, leaving a large cushion to pay the $6 billion of dividends.

With this kind of cash flow, it's no wonder that the company has paid a dividend for 34 straight years. This feat is even more impressive considering Home Depot's business is inherently cyclical.

While management declined to provide guidance, it did claim that same-store sales, after rising by 19.7% last year, could post flat or slightly positive comps based on recent trends. However, Home Depot demonstrated its confidence in its long-run future by just announcing that it was raising its quarterly dividend by 10% to $1.65. Over the last several years, the board of directors has instituted big payment hikes. Starting in 2010, it has boosted the rate annually, starting from 2009's $0.225.

The company did keep the payout at that rate from 2006 until 2009, during the last decade's recession. While I would have preferred to see Home Depot raise the payments through that period, given the severe recession and slumping housing market during that time, in that environment, a steady dividend is acceptable.

At the new dividend rate, Home Depot's dividend yield is 2.5%. This is considerably higher than the S&P 500's 1.5% yield. That's certainly a point in Home Depot's favor.

When considering whether this is a great dividend stock, the company has a long history of paying dividends through various environments, including severe recessions. Home Depot has also raised dividends annually for more than a decade and has a much higher yield than the overall market.

After putting it all together, this adds up to greatness in my book.