Please ensure Javascript is enabled for purposes of website accessibility
Log In Help Join The Motley Fool
Free Article Join Over 1 Million Premium Members And Get More In-Depth Stock Guidance and Research
By Jim Halley - Mar 2, 2021 at 7:36AM

These stocks made investors a lot of money in 2020. Which one will be the better choice this year?

CRISPR Therapeutics (CRSP 2.78%) and Fulgent Genetics (FLGT 3.78%) operate at different ends of the scientific gene pool. CRISPR, named for the Nobel Prize-winning CRISPR gene-editing technique, is a clinical-stage biotech company that is looking for gene-editing therapies to treat blood disorders, cancer, diabetes, and other diseases. Fulgent Genetics, meanwhile, is a genetics testing provider that uses next-generation sequencing (NGS) to study genetic variations connected with diseases or other biological phenomena.

One similarity they do share is their shares' meteoric rise over the past year. CRISPR's have climbed more than 150%, while Fulgent's have skyrocketed 470%. Which looks to be the best buy right now? 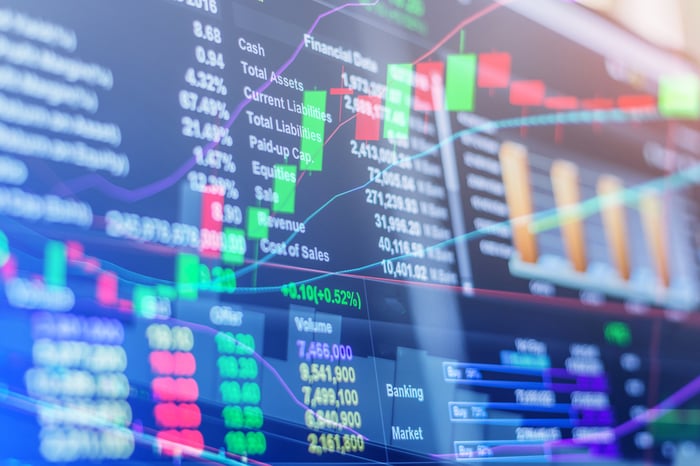 CRISPR has plenty of potential but little revenue

CRISPR has several promising therapies in its pipeline, led by CTX001, which the company is testing on sickle cell disease (SCD) and transfusion-dependent beta thalassemia (TDT), two inherited blood disorders.

CTX001 uses the CRISPR-Cas9 gene-editing tool to change a patient's stem cells to create high levels of fetal hemoglobin in red blood cells. Fetal hemoglobin, found in infants, delivers oxygen more efficiently than adult hemoglobin. The hope is that CTX001 will reduce the need for blood transfusions for people with TDT and cut down on the painful vaso-occlusive crises (VOC) in SCD patients that occur when blood circulation is obstructed by misshapen red blood cells.

In December, CRISPR and partner Vertex said they saw positive results in 10 patients treated with CTX001 in two ongoing phase 1/2 trials for SDC and TDT. According to data from the companies that was reported in the New England Journal of Medicine, follow-up visits with the studies' 10 patients within three to 15 months after they were infused with CTX001 found that all seven TDT patients were transfusion-independent and all three SCD patients no longer needed blood transfusions or experienced VOCs.

Though the study's sample size is very small, the impact of a potential cure for the blood disorders is huge. SCD is the most common blood disorder in the U.S., affecting roughly 100,000 people, according to the Centers for Disease Control and Prevention. The CDC's figures show that it affects 1 in 365 African-Americans and 1 in 16,300 Hispanic Americans.

TDT is even rarer, with roughly 2,000 people in the U.S. living with the disease. Both diseases, however, are costly because they require regular blood transfusions, and patients with either disease have reduced life expectancies.

The U.S. Food and Drug Administration has given CTX001 orphan drug, fast track, rare pediatric, and advanced therapy designations. These are designed to speed the therapy's clinical development, and they will give the company seven years of marketing exclusivity in the U.S. if the drug is approved. The company also has other therapies in early trials to treat type 1 diabetes and cancer.

As exciting as CRISPR's work is, the company had only $500,000 in collaboration revenue in 2020 and posted a loss of $348.9 million last year. However, it is in a solid cash position with $1.6 billion on the books -- enough to last more than four years at its current burn rate. The hope is that one of the company's therapies will make it to market well before that. Management said they expect the early trials on CTX001 to finish sometime this year.

Fulgent Genetics had a record year in 2020, thanks to its COVID-19 reverse transcription polymerase chain reaction (RT-PCR) and NGS tests. In the third quarter alone, the company reported revenue of $101.7 million from its testing -- a leap of 882% year over year, most of which came from COVID-19 tests.

Though COVID-19 vaccines are beginning to slow the number of cases, the company said recently it expects the need for testing to continue well into 2021. In an updated guidance letter on Nov. 23, management said the company should generate at least $300 million in revenue for 2020, a rise of more than 800% over 2019, and that it could increase its capacity to perform more than 60,000 tests a day.

The company has made a lot of money off its COVID-19 tests, but its best long-term news may be that its non-COVID-19 revenue rose 57% in the third quarter, sequentially.

Fulgent is certainly a "coronavirus stock," but once the disease is under control, there will still be a bright future for the company. A genetic testing services market study said market size for medical genetic testing should reach $45.46 billion by 2026, giving it a compound annual growth rate of 4.3%.

In the first quarter of 2019, before the pandemic took full effect, the company reported that revenue was up 48% over the prior quarter. As this number suggests, Fulgent is hardly a one-trick pony; it offers 18,000 single-gene tests and more than 850 tests for rare diseases. 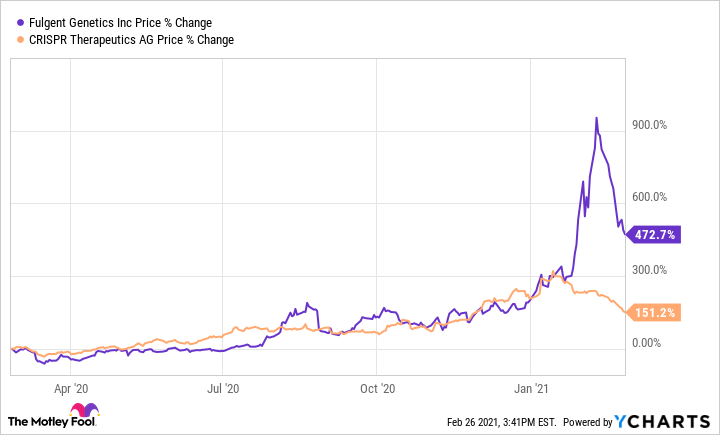 I'm excited about both biotech stocks, but for different reasons, especially in the long term. CRISPR and its gene-editing therapies have huge moon-shot potential, but at this point, Fulgent Genetics is the safer pick. The company is already profitable and is showing it has a path to future growth, even after the pandemic.

I also think concerns about the coronavirus aren't going to go away quickly, so Fulgent's accurate tests for COVID-19 and its variants will continue to bring in strong revenue for the rest of the year.