The 50 concept stores it has opened so far seem to be a big hit.

While reporting its fourth-quarter and full-year 2020 results in a press release this morning -- beating analyst estimates by just $0.01 on earnings per share (EPS) and missing slightly on revenue, according to Zacks Equity Research -- discount variety store operator Dollar Tree (DLTR -5.67%) also reported briefly on its relatively new "combination store" concept. Launched in 50 different small towns across the United States, the combination stores have been highly popular and profitable, according to the press release.

Company president and CEO Michael Witynski, highlighting the successes of Dollar Tree's various brands, remarked the retailer is "thrilled to introduce a new Combination Store format that performed extremely well in nearly 50 small towns and rural communities during fiscal 2020." The combination store is a fusion of the company's two chief brands, Family Dollar and Dollar Tree, and is designed for locations with a population of approximately 3,000 to 4,000. 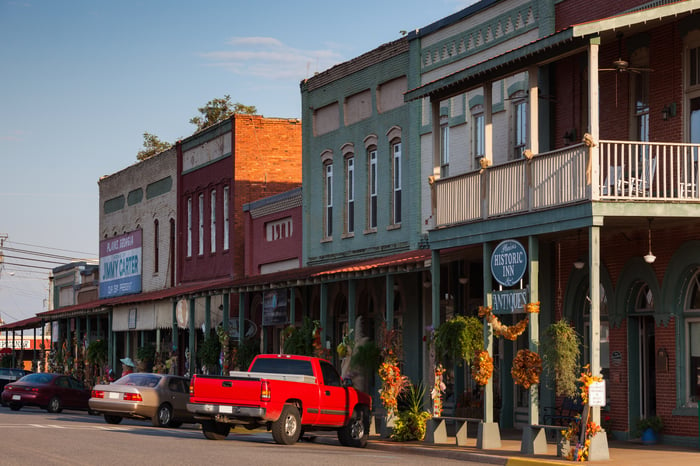 The first two pilot stores opened their doors in 2019, with their success prompting Dollar Tree to expand the lineup first to 32, then to roughly 50 locations last year. Most were opened in July or later, when COVID-19's summer ebb drove a rebound of in-person shopping.

According to Dollar Tree, the combined format makes the stores efficient in terms of expenses, and same-store sales are 20% higher in combination stores than in small-town Family Dollar stores without the Dollar Tree features. The company describes this as a profitable strategy for "markets where the Company would traditionally not open a Dollar Tree store alone."

Dollar Tree's stock is rising following its Q4 earnings release. The company also recently inked a deal with Instacart, the same-day delivery enterprise currently edging toward an IPO, for service out of 6,000 Family Dollar stores.