Please ensure Javascript is enabled for purposes of website accessibility
Log In Help Join The Motley Fool
Free Article Join Over 1 Million Premium Members And Get More In-Depth Stock Guidance and Research
By Bradley Freeman - Mar 3, 2021 at 7:56AM

Since Penn National Gaming (PENN 1.84%) purchased 36% of the sports media company Barstool Sports early last year, the combined duo has been quite busy. A growing piece of Penn's physical assets have been converted to the Barstool brand with immediate upticks in demand following the change.

Perhaps the biggest project the two have taken on is the digitally-native Barstool Sportsbook app. The product found success in Pennsylvania, the state where it launched, and the company is looking to expand its reach as quickly as possible. Here's an update on how this sportsbook product is doing, and where it could go from here. 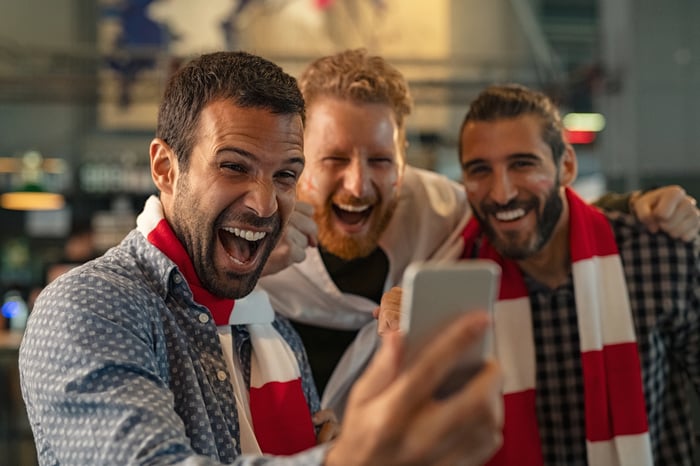 This month, Barstool Sportsbook opened in the state of Michigan along with formidable competition from DraftKings and Flutter's FanDuel. During the first 10 days that online sports gambling was legal, Penn's offering thrived.

It claimed almost 24% market share, putting Penn in third place, just behind DraftKings and FanDuel. But the results are even more impressive than they seem at first glance.

The duo reported $1.70 million of adjusted revenue for its first 10 days in Michigan. By comparison, DraftKings, FanDuel, and BetMGM (from MGM Resorts International) all generated negative adjusted revenue. This is a good sign that Penn and Barstool are able to attract gamblers more economically than their rivals.

Daily active users in Michigan outnumbered their Pennsylvania counterparts by 80% while also making 68% more first time deposits to their accounts. Encouragingly, the attention surrounding the debut in Michigan also boosted Pennsylvania registrations 99% on a week-over-week basis.

More states in the plans

After two successful launches, Penn plans to turn its attention to Illinois to build on its existing casino footprint there. CEO Jay Snowden hopes to have Barstool Sportsbook up and running by the time the NCAA college basketball tournament starts in March. He also hopes to be in 10 or more states by the end of 2021. Just like in Michigan, Penn will enjoy first-mover advantages in Illinois, so early results should again be solid.

Additionally, Texas politicians introduced a bill this week to legalize sports gambling. With 29 million people in the Lone Star State (roughly triple the population of Michigan), this would truly be a monumental piece of legislation for Penn National and the rest of the industry. If that isn't encouraging enough, Governor Andrew Cuomo in New York has also endorsed legalizing online sports gambling in his state where Penn is already set up to operate.

It's no wonder why this industry is seeing so much momentum on the legal front: The pandemic hurt state budgets around the nation. Legalizing, regulating, and taxing sports gambling would provide states with much-needed revenue without creating an economic headwind via tax hikes -- the last thing a reeling U.S. economy needs.

This legislative trend will be a tide that lifts all sports gambling boats. Still, Penn and Barstool are well-positioned to seize this growing opportunity. Their offerings are finding meaningful success without sinking equally meaningful marketing dollars into the endeavor. If the duo can continue executing in this fashion, the sports gambling app's potential is immense, and investor returns for Penn National should be immense as well.