Please ensure Javascript is enabled for purposes of website accessibility
Log In Help Join The Motley Fool
Free Article Join Over 1 Million Premium Members And Get More In-Depth Stock Guidance and Research
By Rick Munarriz - Mar 5, 2021 at 9:29AM

The delivery specialist is partnering with Flow Payments to create a delivery and payment solution for marijuana dispensaries.

Some pairings are as logical as they are inevitable. Shares of Waitr Holdings (WTRH 7.32%) are moving sharply higher after the company announced plans to pursue a partnership with Flow Payments that will ultimately lead to a delivery and payment solution for cannabis dispensaries in a compliant marketplace.

It's perfect when you think about it. Waitr -- through its namesake platform and its Bite Squad delivery platform -- is already serving more than 700 rural and underserved cities with online ordering and takeout delivery solutions. Why not just have the same fleet of drivers also deliver legalized marijuana where federal and state directives make it available? You turn to Waitr for your food. You order cannabis. You may very well be hungry again, so you order more food through Waitr Holdings. 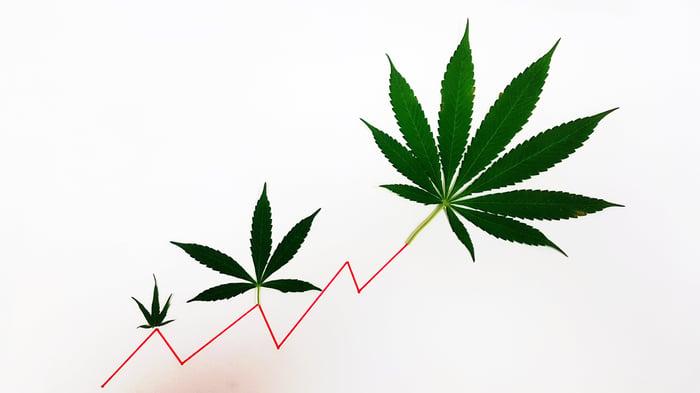 There's a good chance that you have never heard of Waitr Holdings. When it comes to the third-party delivery apps for restaurants (and in some cases, grocery stores), you probably think of recent IPO DoorDash (DASH 6.30%). Uber (UBER 4.16%) with its Uber Eats platform and its acquisition of Postmates is the other leading player in this space.

DoorDash commands a nearly $50 billion market cap. Uber is roughly twice as large in terms of market valuation, but its biggest contributor is its flagship personal mobility service. Waitr Holdings is a much smaller player, with a market cap of just $330 million as of Thursday's close.

It makes sense for Waitr Holdings to be bite-sized relative to its rivals. It caters to the small and sometimes medium-sized cities that are presently overlooked by DoorDash, Uber Eats, and other platforms feasting in metropolitan markets where it's easy to scale. Waitr Holdings has 2 million active diners on its platform, but it's only averaging 40,000 orders a day. Waitr Holdings is also growing slower than the names you know. Revenue rose just 7% in the third quarter. It will post its fourth-quarter results early next week.

Another thing that makes Waitr Holdings stand out from the competition -- and this is a good thing -- is that it's actually presently profitable. It has come through with back-to-back quarters of positive income. We'll find out come Monday if it can stretch that streak to three quarters.

It's important to note that Waitr won't be delivering marijuana to your home by next week. Combining its proprietary delivery technology with partnerships and corresponding process solutions that Flow Payments brings to the table will take some time to set up. Building out a statutorily compliant delivery and payment solution for cannabis won't happen overnight, and if it's successful, it's just a matter of time before DoorDash and Uber follow suit.

It will be a game changer if it all pans out. The bigger-ticket cannabis orders should compensate drivers with larger gratuities, so that will keep the fleet happy. Waitr Holdings itself could see a big bump in revenue from its trailing top line of $200.6 million.

You will naturally want to be careful with the near-term volatility. If investors start to bid up Waitr Holdings as a marijuana stock, it's going to lead to some big price swings given its modest market cap and speculators pounding on a hot stock with a small share price. The story makes sense and the catalysts are there, but expect the next few days -- especially with Waitr Holdings in a position to talk about the proposed partnership more during next week's earnings call -- to be pretty wild.

Why Waitr Holdings Stock Is Up Big Today